Van Gisbergen led the first and third stints but played second-fiddle to Whincup for most of the middle phase of the 200km race.

He put a key move on Whincup for the lead with 27 of the 70 laps to go, and the Kiwi ultimately prevailed after a late Safety Car period.

The 2016 champion’s third win of the campaign is his first since taking a double in the Adelaide season opener.

Scott McLaughlin rounded out the podium despite falling outside the top 10 early and maintains his championship lead over van Gisbergen.

“Our cars have been awesome all weekend and it’s a good personal day for the #97 crew,” van Gisbergen said.

“They turned our car around, qualifying and race, and we came out on top. As a team, a double-one two is awesome.”

Van Gisbergen made the most of starting from pole, keeping the lead off the line as Whincup and McLaughlin fell to fourth and 11th, from second and seventh.

David Reynolds and Rick Kelly slotted into second and third, but were both passed by Whincup by lap five.

The factory Commodores pulled away at the front of the field through the first stint, van Gisbergen’s advantage trimmed from 1.6 seconds to 0.8s by the time Whincup pitted on lap 18.

McLaughlin got back up to ninth before making the race’s first pitstop on lap 13, with a shorter fuel fill in a bid to get clean air.

Van Gisbergen stayed out until lap 24 and came out behind both Whincup – by 7s – and McLaughlin, and just ahead of Reynolds.

He moved past McLaughlin on lap 28, as the Shell Ford’s earlier stop started to show.

With his tyres dropping off, McLaughlin was unable to stay with the top two.

Whincup’s lead was cut as the tyre strategies played out in the second stint, and van Gisbergen made a pass for the lead into Turn 11 as they navigated lapped traffic on lap 43. 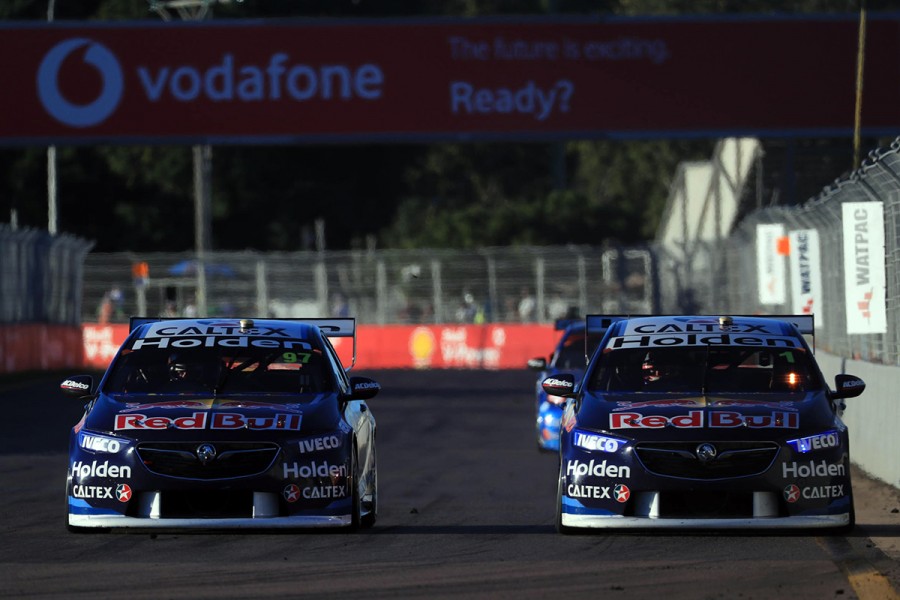 Van Gisbergen’s charge continued and he cruised away from his team-mate to the extent of 4.2s by the time Whincup pitted on lap 48.

Following van Gisbergen’s stop the next time around - and a slight delay merging into the fast lane - the pair were split by 2.6s with 20 laps remaining.

Whincup made slight inroads early in the stint, but van Gisbergen led by 3.9s with 10 laps remaining.

The Safety Car came out two laps later, when Michael Caruso’s Nissan was fired into the tyre bundles on the inside of Turn 11 after contact from Anton De Pasquale’s Commodore.

Racing resumed with five laps to go, and while Whincup went with van Gisbergen he could not mount a challenge.

The pair ultimately crossed the line split by 0.7822s.

“The story of car #1’s day was a poor start and that put us behind the eight-ball,” Whincup said.

“I think there’s something bent in the front-end, the kerbs are really aggressive here.

“But there was no team orders or cruising to the end, we pushed hard and if there was a gap I would have taken it.”

McLaughlin lost touch with van Gisbergen during the second stint, falling 10s behind.

He was caught by Craig Lowndes, that pair pitting together for a second time on lap 40.

A three-second gap returned after the stops courtesy of the required fuel fills, in McLaughlin’s favour.

Lowndes had halved that by the time the Safety Car came out but – like Whincup on van Gisbergen – could not capitalise on the run home.

With the race results, McLaughlin still leads van Gisbergen by 131 points, with Reynolds and Saturday victor Whincup 387 and 403 adrift.

“The crew gave me an awesome strategy and the tyre life was fantastic,” McLaughlin said.

“I didn’t get the best start and lost a few places, but I’ll take third after today. It’s a win for us.”

Reynolds looked set to bring his Penrite Commodore home in fifth, but lost that place to Chaz Mostert after the restart.

Behind Mostert and Reynolds, Kelly took seventh and Fabian Coulthard came from 18th to finish eighth.

Cameron Waters made it a pair of Tickford Falcons in the top 10, which was rounded out by James Courtney.

Will Davison and Jack Le Brocq were 10th and 11th at the restart, but a Turn 3 tangle dropped Davison to 17th.

Davison then crashed his Milwaukee Falcon at Turn 6 with two laps remaining after another clash, this time with James Golding.

For his part, Le Brocq crossed the line in 11th as the first rookie home.

Beyond Kelly at the front of the field, Nissan Motorsport’s race started in inauspicious circumstances.

In the pack at Turn 2 on the opening lap, Simona De Silvestro on the very inside turned team-mate Caruso around, earning a 15-second penalty.

At the same time, Garth Tander and Richie Stanaway made contact, which later earned Tander the same sanction.

Tander finished 19th, one spot ahead of Stanaway, while De Silvestro was 22nd.

Scott Pye ran in the top 10 early but an extra pitstop after the wrong tyre was mistakenly fitted at his first stop meant he wound up 21st.