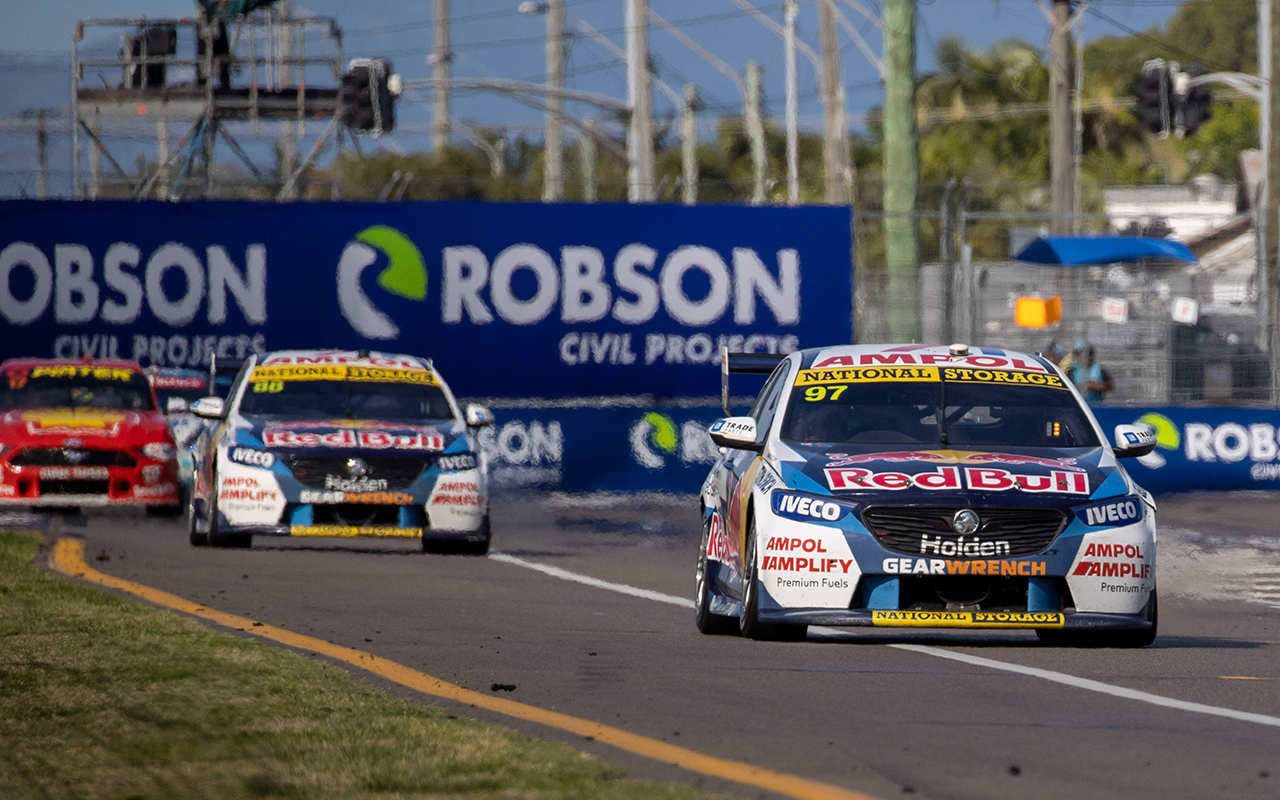 Shane van Gisbergen scored a memorable victory in the final race of the Robson Civil Projects Townsville SuperSprint, from 12th on the grid.

The Kiwi sat just ninth in the order upon a Safety Car restart with nine laps to go, but had the freshest tyres of anyone after running a long first stint.

Van Gisbergen made it to third in just three laps, before teammate Jamie Whincup let him through with four to go to attack leader Scott McLaughlin, whose tyres were fading after an early stop.

It took only a matter of corners before van Gisbergen was through on the Shell Ford, diving down the inside at Turn 11, running McLaughlin wide enough to move Whincup through to second.

Although Whincup is McLaughlin’s closest championship challenger, the team did not intervene, allowing van Gisbergen to take his second win of the day.

“What an awesome race,” said van Gisbergen, whose earlier win in the earlier race broke a year-long drought and marked Triple Eight's 200th.

“We had a great car. I got stuck in the first stint and it was going to be interesting trying to get back to the podium but the Safety Car worked out perfectly.

“Big battle at the end, I tried to do the team thing to help Jamie, but awesome result.”

McLaughlin, who had started 10th, hung on for third but was left disappointed by van Gisbergen’s late-race move.

“I had nothing left, I was trying my best,” said McLaughlin.

“I think if we didn’t have the Safety Car we might have been a real good shot, we were looking after our tyres there but the Safety Car happened and I was just hanging on.

“Shane was playing the team game there, he’s made plenty of clean passes there over the years and that was pretty average, just a big push-off there.

“I get that he’s playing the team game but it would have nice to have a bit more of a fair battle.”

Chaz Mostert was another late charger on newer tyres to finish fourth ahead of Scott Pye and Brad Jones Racing teammates Todd Hazelwood and Nick Percat.

Polesitter Hazelwood had won the BJR drag race off the start, leading Percat into the first corner, with Anton De Pasquale the closest pursuer.

De Pasquale though did not have the pace to run at the front, losing a succession of places across the following laps, before eventually crashing out and causing the crucial Safety Car.

Percat spent the early stages holding off a clearly faster train of cars consisting of Mostert, Whincup, Waters and van Gisbergen, while Hazelwood edged away out front.

Mostert finally made the move on Percat at Turn 3 on lap 15 and when the BJR driver ran wide at Turn 11, Whincup also went through.

Percat and the following Waters immediately dived to pitlane and as they did so, the closely following van Gisbergen spun the Monster Ford.

Starting out of position after a qualifying run-in with Garry Jacobson, McLaughlin pitted from eighth on lap seven, attempting an undercut at the expense of having older tyres at the end.

Hazelwood pitted on lap 17 and emerged four seconds behind new effective leader McLaughlin but just ahead of Whincup, who’d pitted on the previous lap.

Mostert and van Gisbergen were the last of the stoppers on lap 21 and 24, with the latter’s stop coming just as De Pasquale suspension failed, causing his crash and the need for a Safety Car.

After a lengthy recovery of the Penrite Holden, the race restarted with nine laps to go and McLaughlin facing an uphill battle.

McLaughlin proved good enough to hold off Hazelwood, but could do nothing to stop the two Red Bull Commodores at the finish.

After four successive weekends of racing across Darwin and Townsville, McLaughlin leads Whincup by 143 points.

The championship will have a weekend off before a doubleheader at The Bend in South Australia and the finale at Bathurst on October 18.