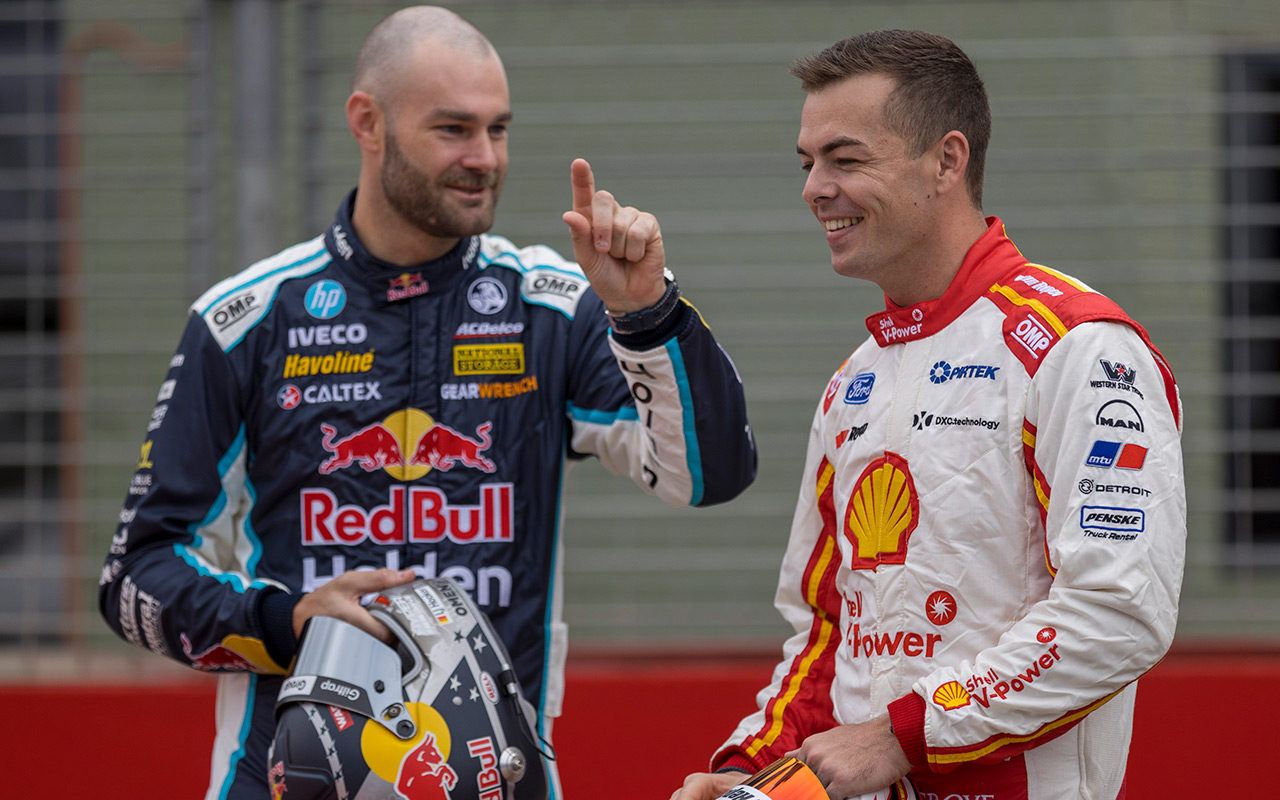 Perennial championship rivals Shane van Gisbergen and Scott McLaughlin will share the front-row of the grid for the Superloop Adelaide 500 finale.

Van Gisbergen rebounded from an underwhelming Saturday Shootout lap to secure ARMOR ALL Pole 24 hours later with a 1:19.8101.

That was good enough to keep his Kiwi compatriot at bay, McLaughlin less than four hundredths off the pace.

The top two drivers in the last two championship seasons, van Gisbergen and McLaughlin battled it out for second place in yesterday’s race, the latter getting up.

Saturday pole sitter and race winner Jamie Whincup was the last man out in the Shootout but made an error through Turn 11, relegating him to seventh.

“Just gutted Jamie [Whincup] made a mistake there, it would've been good to be on the front-row, but it will be an awesome race with Scotty starting up front,” said van Gisbergen.

McLaughlin added of the Kiwi resurgence: “I stuffed up Turn 1, where we had our advantages in the first sector and I lost that.

“Shane and Jamie are really fast in the second and third sector, but overall the car is better and it was nice to have a clean shot at it today.

“It's nice to be up the front, we've got track position, try and force their hand a little bit. I think we've got a really good long-run car compared to other people.”

Cameron Waters, Will Davison and Chaz Mostert will be positioned to revive their Saturday scrap, holding down grid slots from third to fifth.

Davison looked set to challenge for his first ARMOR ALL Pole Position since Homebush 2014 before a lock-up into the final corner.

The 23Red driver was fastest of all drivers to the end of the second sector.

Fabian Coulthard, Lee Holdsworth and Rick Kelly all did well to progress from Q1 to the Shootout, securing sixth, eighth and ninth on the grid.

Anton De Pasquale rounded out the 10 after losing time through the final sector.

The biggest omission of the Shootout was De Pasquale’s teammate, Saturday front-row starter David Reynolds, who failed to set a single lap time in qualifying due to engine issues.

The good news for the Penrite Racing driver though was he finished Practice 3 on Friday inside the top 10, granting him a free pass into Q2.

He will thus start this afternoon’s race from 14th.

“I don't know what happened, it just sounded funny when I started it up to take the green flag this morning and I don't know, it just never got any better,” Reynolds said.

“It sounded like a plug lead but I'm not sure. They couldn't get it fixed in time, short sessions make it really difficult to get out.

“It's going to be a really tough day but that's racing. It happens to everyone unfortunately.”

Jack Le Brocq was another hard luck story, a transaxle issue forcing him to watch the end of Q2 as he was shuffled down to 11th courtesy of a late flyer by Tickford teammate Holdsworth.

Between Le Brocq and Holdsworth were Saturday Shootout representatives Mark Winterbottom and Nick Percat; the latter had set a purple middle sector for Q2 on his last run but ultimately failed to move up the order.

Earlier in Q1, Holdsworth led just about the entire session, improving lap after lap – either side of a red flag – to post a 1:20.4348.

That put him ahead of Coulthard, Le Brocq and Kelly as the quartet to progress to Q2.

Todd Hazelwood was bumped out late by Le Brocq, missing the cut by less than a hundredth of a second.

The news was worse for Hazelwood’s Brad Jones Racing rookie teammate Jack Smith, whose Turn 8 crash was the cause of the red flag four minutes into Q1.

“I'm fine. I haven't actually crashed there before so it was a bit new,” Smith said.

“It felt like a reasonably hard hit but the car looks OK, much to my surprise and the rest of the team.

“I clipped the wall on the inside, I knew it before I even hit it, I saw it coming. I knew I turned in too early, misjudged it, just clipped it and it spat me out.”

It continued a horror weekend for Smith, having already copped a two-fold sanction for missing a compulsory full-field photo and endured a trying run to 20th in Saturday’s race.

The second 78-lap race of the weekend will start at 3:20pm local time, with the grid as follows;