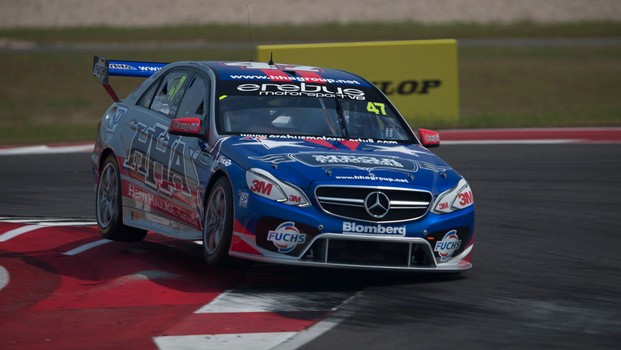 Veteran motorsport patron and V8 Supercars licence holderJames Rosenberg expects to know in August whether his involvement with ErebusMotorsport V8 will continue beyond 2013.

And while he would like to maintain the relationship, headmits it is not guaranteed at this stage.

Both signed up with Erebus when it took over SBR in theoff-season to campaign Mercedes-Benz E63 AMGs in the Championship.

However Rosenberg intentionally only committed to Erebus forthe 2013 season, wanting to see how the team would perform. So far it hasproved a struggle because of an engine horsepower deficit and some reliabilitywoes.

“I didn’t know how this year was going to turn out,”Rosenberg told v8supercars.com.au. “I thought it would turn out pretty good andit still may, but I only wanted one year because I didn’t want to lock myselfin any longer.”

Slade, who drives the Heavy Haulage Australia Benz, iscurrently running 24th in the Championship. In 2012 he finished fifth overallin his strongest season yet, driving the Lucky 7 Falcon for the Stones.

Despite the teething problems, Rosenberg says linking againwith Erebus is his preferred option.

“Erebus have been very good to me, I have had the same dealI had last year with the Stones so I am very happy with that. But I am acompetitive person too,” he added.

“Certainly, in two months time they will be the first peopleI talk to because I have promised them right of renewal, or to buy or whatever.I am probably not in the market to sell at this stage.

Slade is one of a number of young drivers Rosenberg hassupported over the years in various categories. His V8 association goes back tothe 1990s running fellow South Australian Mark Poole in a Commodore sponsoredby his company Gawler Farm Machinery.

Rosenberg’s preference is that he and Slade continue to racetogether, but he conceded that may not be possible.

“I am not sure what is going to happen next year,” Rosenbergadmitted. “I know Tim is contracted this year and I assume he will be therenext year. But what he does and what I do are separate.

“We would both like to be in the same mould as we havealways been. But as I have said to him, he is 26 and I am 64, he has to lookafter himself just like I have to look after my licence. If there are opportunitiesfor him, or me… the licence is millions of dollars in value so it’s got to beserviced.

“I can’t speak for Tim, he is with Erebus, that is up tothem to figure out what they want to do. We would like to be of the sameidentity but we are realistic. If it has got to come apart it has got to comeapart.”