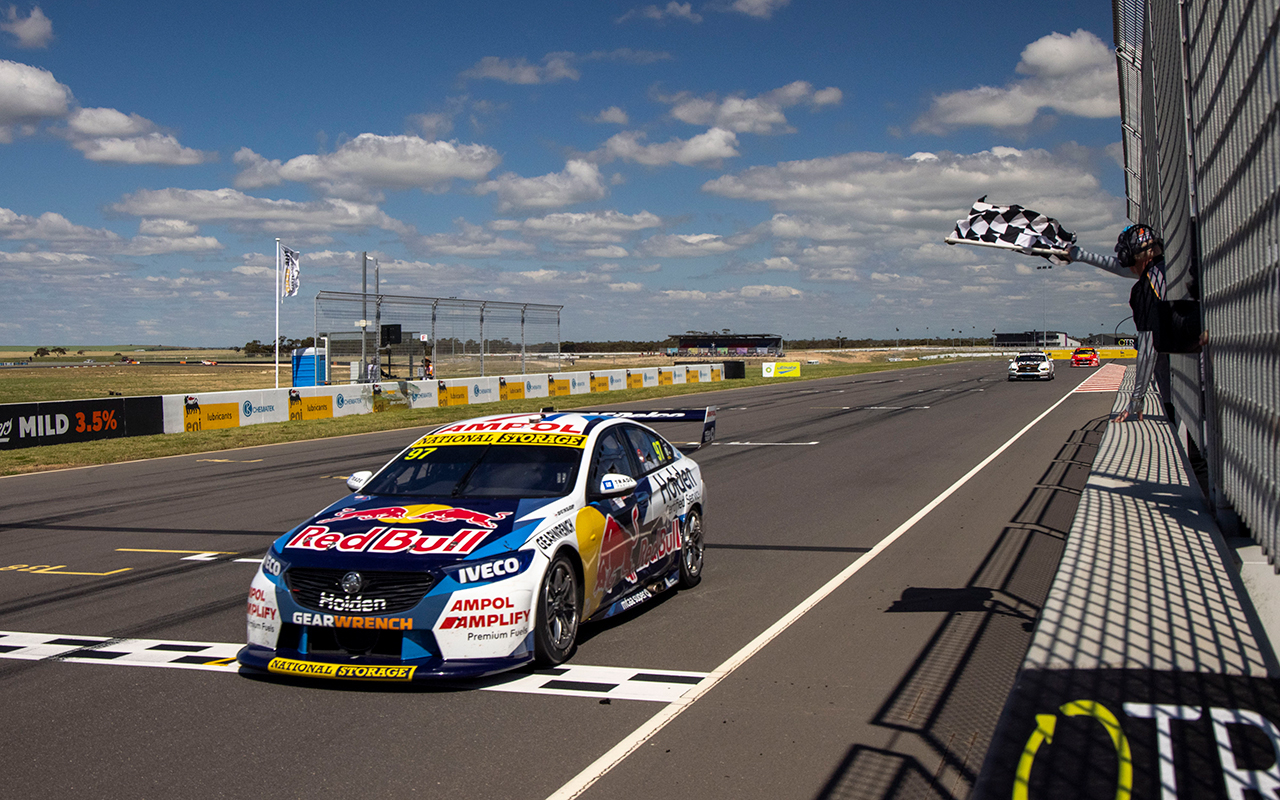 Shane van Gisbergen scored victory in an entertaining second race at the Repco The Bend SuperSprint, but it wasn’t all good news for Red Bull HRT.

A slow pitstop due to an air spike issue destroyed Jamie Whincup’s hopes of recovering from his lowly 11th place qualifying effort.

The seven-time champion finished 17th and, with McLaughlin third behind van Gisbergen and Andre Heimgartner, the Shell Ford driver now leads the championship by 201 points.

Van Gisbergen took the race lead off the start, going around the outside at Turn 1 of polesitter McLaughlin, who received a slight bump from fast-starting teammate Fabian Coulthard.

Fourth-placed Chaz Mostert kicked off the pitstops on lap five, leap-frogging McLaughlin when the #17 Mustang pitted a lap later.

He returned to the track right on the tail of Mostert and McLaughlin, nudging the Shell car sideways at Turn 4 on his outlap.

One corner later he was through on McLaughlin, before taking the effective lead from Mostert at Turn 1 the next time by.

Heimgartner pitted with Mostert on lap five but, despite his ageing tyres, pounced on Mostert and McLaughlin to take second in a two-for-one divebomb at Turn 6.

Van Gisbergen managed the gap to Heimgartner in the closing laps to win by 1.1462s with McLaughlin trailing the Kelly Mustang home in third.

Mostert paid the price for his aggressive strategy, dropping down the order rapidly after losing the lead and eventually finishing 11th.

Cameron Waters and Nick Percat sat fourth and fifth with four laps to go but, despite pitting mid-race, were also struggling with tyres and slumped to eighth and ninth at the finish.

The result marked the first time in the championship’s 60-year history that Kiwi drivers have swept the top four places, and represented a strong recovery from van Gisbergen.

“What a turnaround from yesterday, we had no tyre life and kept blistering them,” said the 2016 champion.

“I looked after them at the start, taking it easy and then the car came alive. I came out [of the pitstop] in the battle, it was really cool.”

Heimgartner was also happy to get his tyres to the finish, adding: “I’m very happy with that. I had a big go there and luckily the tyres held on.

“The laps few laps they were pretty ordinary, you could feel the tyres going away from about 10 laps in.”

McLaughlin admitted he’d taken a conservative approach to the race’s opening turn, but enjoyed the battle with Mostert and Heimgartner later in the race.

“Shane on the race line could brake heaps deeper, I probably gave it away a little bit there, but it was big-picture stuff today.

“We obviously knew Jamie was back a fair bit so it was all about getting some points. It was a good battle with Chaz and Andre, it was awesome fun.

“I had no idea that Andre was there. I was focused on Chaz and then saw a white car down the inside of me and was like ‘far out’. It was a bloody good move; it’s why we go racing.”

The third and final race of the Repco The Bend SuperSprint will start at 2:25pm local time.