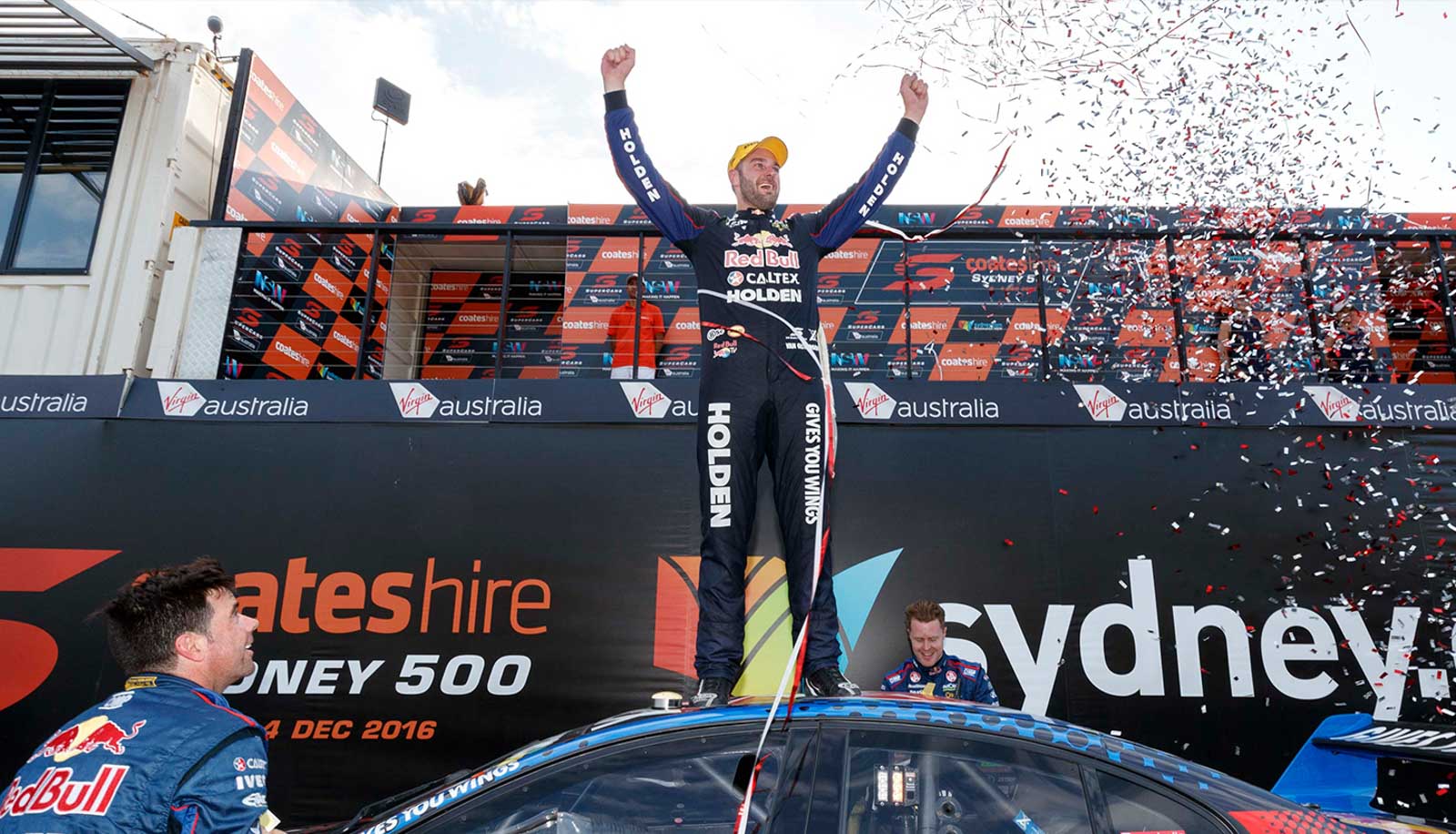 Shane van Gisbergen has signed off his championship with a win at the last ever race at the Sydney Olympic Park street circuit.

Yesterday the 27-year old Kiwi earned enough points to clinch this year’s Virgin Australia Supercars Championship, and today he punctuated that with victory by 1.02 seconds over Garth Tander.

In previous years when he’s won the race, he hasn’t been able to perform the celebratory burnout, which is reserved for the champion – today, he made up for that holding out the chequered flag out the car on his run past the team and smoking it up.

“1-2 was pretty awesome for my first year,” van Gisbergen said.

“It’s pretty awesome; it’s a lifetime goal to finally achieve it is pretty special. I want to come back next year and try it again. It’s been an exciting year.”

Van Gisbergen has won the last four Sunday races at Sydney Olympic Park, with the final points margin 200 points over Jamie Whincup. The finale will move to Newcastle next year after seven seasons at Homebush.

The podium finish for Tander came in his last race for the Holden Racing Team; the 2007 champ is yet to announce his plans for next year.

“We didn’t have the speed to go with Shane, I think he was just cruising around in front of us to be honest,” Tander said.

“The car got a lot better. Thanks very much to the HRT fans and supporters through the whole journey … good luck to these guys next year, I look forward to racing them on track.”

A late race safety car for Rick Kelly stranded in pit lane reset the field for the final laps – van Gisbergen and Tander sailed away, but it was on for third with David Reynolds holding on for Erebus despite a stalking Jamie Whincup.

Erebus took its first podium finish in a Holden since switching brands this year, with Reynolds holding off the six-time champ by 0.4 seconds, to Betty Klimenko’s delight.

“I just said to the boys, sorry it took so long,” Reynolds said.

“That race was really full on at the end there. I ran out of water, that’s why they gave me a drink at that last stop. I lost comms – I’ve had heaps of dramas. The car was beautiful.”

Van Gisbergen drove through doubt after making contact with Tander in pit lane, though it was ultimately deemed to be no breach of the rules.

James Courtney on an alternate strategy looked the goods early, but dropped back to sixth in the order.

Scott McLaughlin stitched up third in the championship after finishing fifth, while Craig Lowndes was back in ninth.

It was a hard end for Jason Bright with Brad Jones Racing, hitting the concrete and unable to finish the race. An incident between Cameron Waters and Fabian Coulthard meant the rookie didn’t finish, while Coulthard was 21st.

Outgoing champ Mark Winterbottom finished 12th after an ordinary run, that saw him dive in for fresh rubber in the late safety car to try and find an advantage.