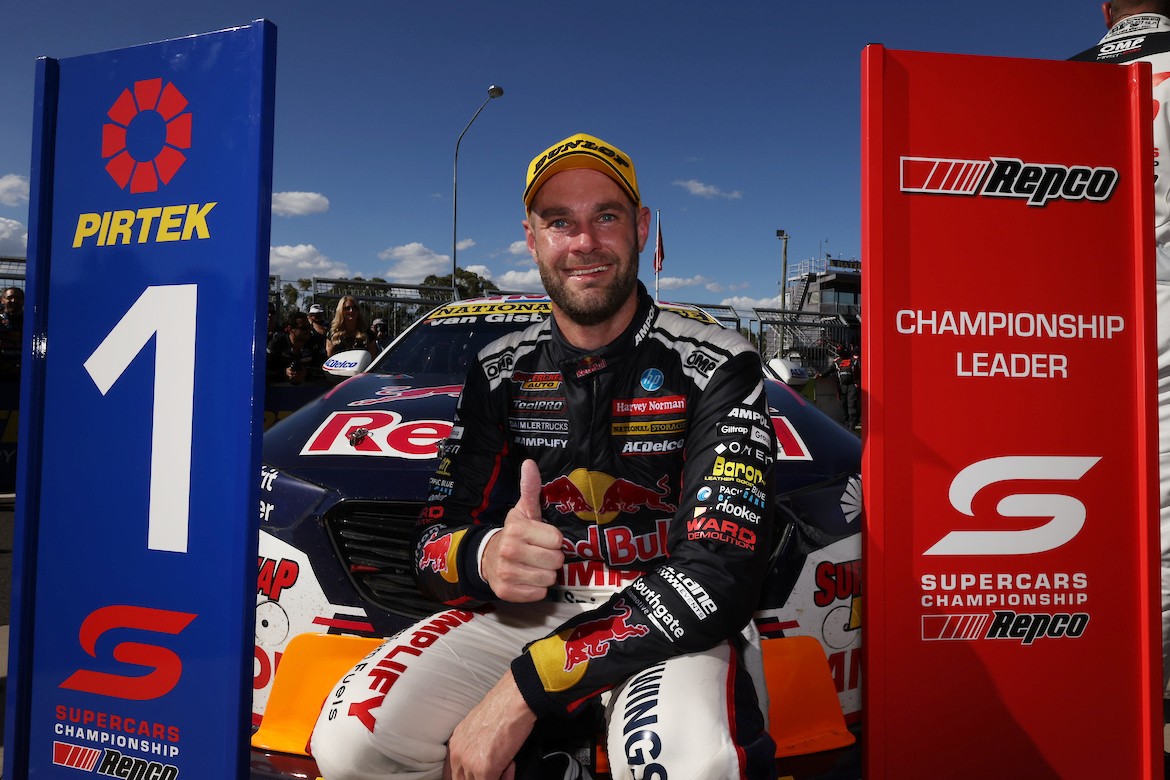 Shane van Gisbergen has completed a dominant sweep of the Repco Mt Panorama 500, with the Red Bull Ampol Racing driver cruising to victory in Race 2.

Van Gisbergen felt at home on the mountain when it mattered on the weekend, claiming two wins and a pole to assert himself as the 2021 championship favourite.

On Sunday, van Gisbergen crossed the line with a 6.1s margin over Cameron Waters, who led the opening stint.

Waters out-dragged van Gisbergen off the line and edged into an early lead, but the #97 shadowed the #6 Monster Energy Mustang's every move.

Through lap 8, several midfield runners had made their first visits to BP Ultimate Pit Lane, including James Courtney.

On lap 9, the 2010 series champion found the wall at the Cutting, with Courtney spinning his #44 Boost Mobile entry in rearwards and into retirement.

The Triple Eight pit wall reacted and boxed Jamie Whincup, with Will Davison stopping on the following lap.

Van Gisbergen remained within striking distance of Waters, but ahead of the leaders' stops, the margin had widened from 0.5s to 1.2s.

WAU blinked and hauled Mostert in on lap 12, with the 2014 Bathurst 1000 winner jumping Anton De Pasquale after the latter's stop.

On lap 14, van Gisbergen dived into the lane, with Waters pulling in from the lead on the following lap.

As Waters rejoined the race, van Gisbergen surged past the black Ford and regained the lead he lost in the opening hundred metres of the race.

From there, the Kiwi stretched his legs and built an advantage, firing in consecutive laps in the 2:06s bracket.

Waters set about a pace of his own, but the margin began to grow as van Gisbergen continued to lay down purple sectors.

On lap 22, Mostert led a gaggle of cars, including Davison, Whincup and Andre Heimgartner, into the lane for their second stops.

The leading duo, as well as De Pasquale, dived in a lap later, leaving Mark Winterbottom to assume the race lead.

To the second round of stops, van Gisbergen enjoyed a 4.2s margin over Waters.

Following the stops, with 10 laps remaining, the margin had blown out to 5.3s.

Mostert was on his own in third, nearly nine seconds off the lead, with Davison handing sixth to Whincup on a platter following an error at the final corner.

The margin from first to second plateaued around the 5.8s mark in the closing laps, with the final margin just over six seconds.

Mostert couldn't overhaul Waters and was 8.6s down by race's end, with De Pasquale and Winterbottom rounding out the top five.

Whincup improved one place to sixth versus his Saturday result, with Davison 1.2s adrift in seventh. 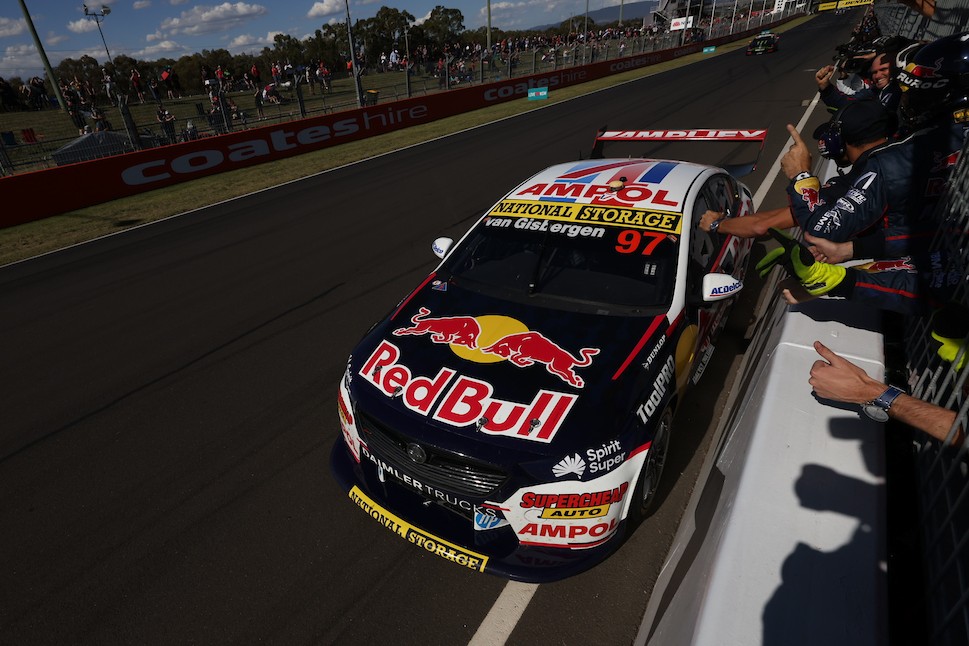 It marked the 42nd career win for van Gisbergen, who will leave the rural New South Wales circuit with a maximum 300-point haul.

"That's a team win, a strategy win, the car was awesome," he said.

"Unfortunately we can't battle on track, so we had to try and win it in the pit lane and we did.

"That middle stint was insane. It was so cool to get such a good car and push in clean air.

"Thanks to my team, Red Bull Ampol Racing. Great way to start the year.

"[Engineer David] Cauchi just asked me to make the gap, normally you're managing managing tyres and everything.

"I had eight laps to do on those tyres, so just qualifying laps the whole time. 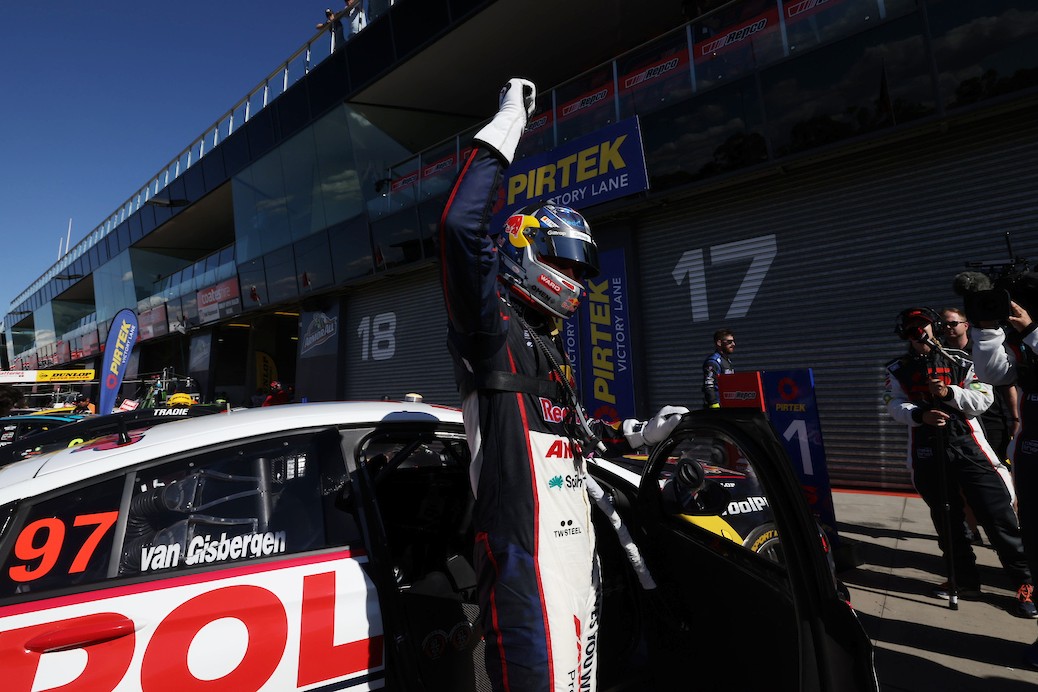 "Watching a sub-par energy drink get smaller in the mirror was pretty cool!

"It's awesome, and also to have fans here again as well. To win here with an atmosphere is awesome as well."

Van Gisbergen will carry a 33-point lead over Mostert into the next round, with Winterbottom 69 points adrift in third.

Fourth-placed Davison is the only other driver within 100 points of van Gisbergen, with Whincup fifth, 102 points down.