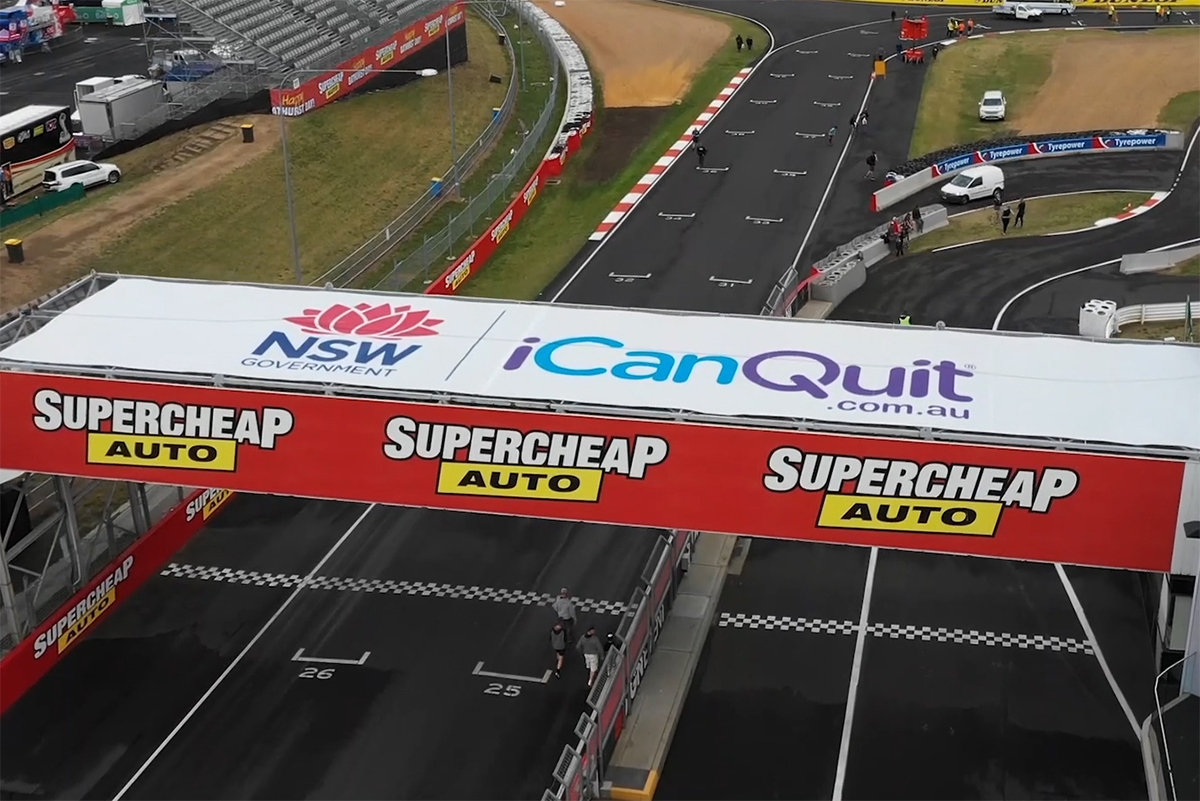 The Virgin Australia Supercars Championship has today announced a new partnership with the Cancer Institute NSW in a bid to get fans to successfully quit smoking.

The partnership launches the new 2018/19 Anti-Tobacco Campaign Program, which aims to promote a healthier lifestyle and get fans to seek the help they need to quit smoking permanently.

The announcement was made on the eve of this year’s Supercheap Auto Bathurst 1000, where a giant iCanQuit.com.au logo features on the roof of the pedestrian bridge over the main straight of the Mount Panorama circuit.

This ensures the millions of fans who tune in to watch this year’s Great Race will know where to go for support to quit smoking and get tips from real ex-smokers.

A Supercars Hall of Fame inductee and current team owner, Dick Johnson has thrown his support behind the cause, having tried to quit for years before he finally stopped smoking.

Johnson has signed on as an Ambassador for the Quit to Win campaign.

“Quitting was one of the hardest things I’ve had to do, and it took me almost as many times as I tried to conquer the mountain,” Johnson said.

“For years I told myself it would be easy to quit smoking, but it wasn’t easy until I got the right help.

“I came from a generation of heavy smokers and quitting has stopped the cycle.

"It’s made a positive impact on myself and the people around me. I really hope our fans get behind it and find the support they need to quit smoking.”

Preston Hire Racing driver Lee Holdsworth is another Supercars Ambassador with a very personal story about the positives of quitting.

“My dad was a heavy smoker and was diagnosed with bowel cancer eight years ago. Despite beating it, the cancer spread to his lungs,” Holdsworth said.

“He then went through several rounds of chemotherapy and radiation as the cancer kept returning to his lungs.

“It was a real worry that he smoked, so with our encouragement he made the decision to quit.

"He’s going really well now and is one of the fittest 66-year old blokes around. He feels better than ever and wishes he’d never started smoking in the first place.”

Scott McLaughlin, a driver for Johnson’s Shell V-Power Racing Team, has also signed on as an Ambassador for the Quit to Win campaign.

Kate Reakes, Manager of Cancer Prevention for the Cancer Institute of NSW says fans will be encouraged to give up smoking by focusing on the benefits.

“We want fans to recognise they have everything to gain by quitting," Ms Reakes said.

"Not only do smokers reduce the risk of premature death if they quit, they also benefit their family’s health by not exposing them to second-hand smoke.

“Partnering with Supercars at one of Australia’s greatest sporting events is a great way to let fans know they can get support to quit when they need it.

"The iCanQuit website - www.icanquit.com.au - offers a forum where people can share their stories and get tips on quitting from real ex-smokers.

"There is also Quitline - 137 848 - a free phone service that connects smokers with experts who can help them through their quitting journey.”

The Cancer Institute NSW will also be an official Partner for the Coates Hire Newcastle 500 on November 23-25.