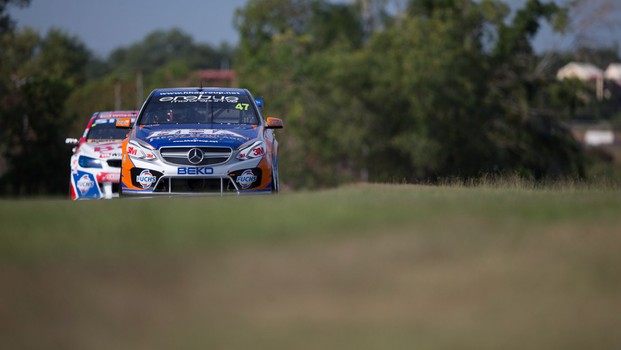 Tim Slade was quick to talk down any sudden form surge after an Erebus Motorsport V8 Mercedes-Benz AMG E63 finished in the top three for the first time since its introduction to V8 Supercars.

In the first year of introducing new brands to the sport there were two Mercedes-Benz and four Nissan Altimas in the top 10. The Mercedes-Benz were Slade and Lee Holdsworth (eigth) while all four Nissans in the field made the 10.

With Winterbottom quick to point out different tyres and strategies on a Friday meant results were hard to judge, Slade was more hopeful than optimistic about the business end of the SKYCITY Triple Crown in Darwin this weekend.

"For sure we are definitely making process. I wouldn't say we were genuinely in the hunt as such at this point in time. We are still well behind in development compared to everyone else," said Slade.

"We started the year with a lot of things that have been well and truly tried and test. We are getting back to base, getting back to zero from the negatives and into the positives.

"We have got some new bits and pieces for this weekend but not all are performance related. We are not going to know exactly where we are at until tomorrow but it's a little reward for the guys."

Slade and the team have clearly been frustrated thus far, but understanding of a challenge that is barely more than six months old against teams who have had years of development.

"It's frustrating but you have no other choice. You just have to roll with it," said Slade, who finished fifth in the Championship last year in a Ford.

Winterbottom has also dealt with his share of frustrations this year as his rivals Jamie Whincup and Craig Lowndes bolt to the front of the pack in the Red Bull Racing Australia Commodores.

Whincup was 15th today and Lowndes 23rd, results Winterbottom predicts will not continue.

"We have gone quite well this year at times, we have just had a few little mishaps. If we have the speed and we get it all together it will be good to us, but tomorrow is the day," he said.

"Until then, at the end of that 60/60, you know what your race pace is and your qualifying pace. It's still good to be fastest today, but means nothing today."

McLaughlin already has a race win as a 19-year-old in his debut season. He says he is just along for the ride.

"I'm still learning a few tricks at the moment as is my teammate Alex (Premat)," he said. "I am having a bit of fun like I have all year."

Winterbottom's teammate Will Davison was 24th today showing the contrast of a Friday session while early-season form setters Jason Bright (14th) and Fabian Coulthard (22nd) were also well down the sheets.

It was a great day for Nissan with Michael Caruso (fifth), Todd Kelly (sixth), James Moffat (ninth) and Rick Kelly tenth, following some solid form at the Austin 400 in Texas three weeks ago.

Tim Slade  ›
15' Wilson Security Racing GRM ›
15' Pepsi Max Crew ›
2013 SKYCITY Triple Crown  ›
Stay In The Know
Sign up to the Virgin Australia Supercars Championship Newsletter
We use cookies to ensure that we give you the best experience on our website. If you continue to use this site we will assume that you are happy with it.Ok