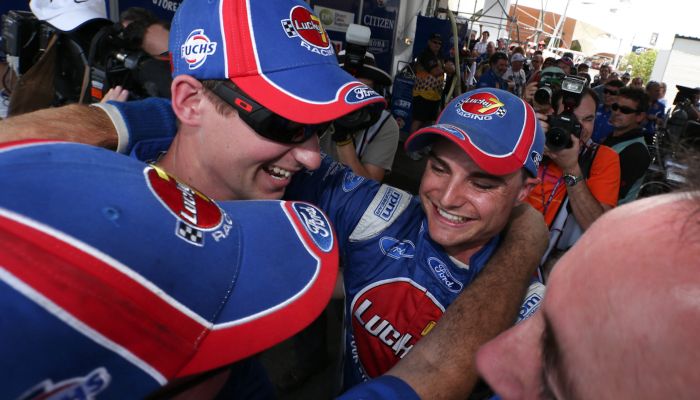 ALL year on the BigPond Sport V8 Supercars website we’ve been able to bring you a range of driver columns and hear from the men themselves.

Today we hear from Tim Slade, fresh from finishing fifth in the V8 Supercars Championship and claiming a career-first pole position at the Sydney Telstra 500.

WHAT a great way to end the year for our Lucky 7 Racing team at Sydney Olympic Park.

The main goal going into the weekend was trying to get that fifth in the championship. Everything else that happened was a massive bonus.

Getting that pole position on Saturday was huge, and a big highlight of my career. I hadn’t had one before in V8 Supercars and it’s definitely something I wanted to cross off the list. I guess there are still a couple of more goals on my list, including getting a race win and a championship – hopefully there’s still plenty of time to get them done.

Finishing ‘best of the rest’ outside Triple Eight Race Engineering and Ford Performance Racing probably makes it as special as a fifth place can get knowing that those two teams won every single race of the year.

They have been extremely dominant, so it’s great that we had the pace of those guys on the weekend.

The heat in Saturday’s race was incredible, especially when I ran out of drinking water in the last 20 laps. The heat hits you pretty quickly - I was surprised. I was quite comfortable for two-thirds of the race until then.

I never usually drink that much water during a race, outside of the endurance races, so we never really refill the drink bottle at pit stops. This time I went through what I had and I guess I used a bit of water on my face and probably wasted a bit trying to keep myself as fresh as possible.

The helmet hose, which puts air into my helmet to cool me down, also came off and it took me a while to realise. I started to get hot and it’s so hard to cool down, and then you get uncomfortable.

The last 10 or 15 laps of the raced were pretty hard and that probably contributed to the reason why I made a small mistake, (Slade locked his rear brakes and ran wide at turn 9 on lap 62) which cost me the lead.

Securing second was still a great feeling and caps off an amazing back-end of the year. I think my engineer (Wes McDougall) worked out from Sandown onwards we were third with the championship points. We didn’t finish outside the top 10 and we had a couple of podiums in that as well.

Now we look ahead to Car of the Future. It’s a case of out with the old and in with the new. We basically pushed our current cars into other people’s trucks on Sunday night – my car has been purchased by the Russell team from Newcastle so they took it home with them!

It will be a massive workload for all the boys at the workshop preparing for Car of the Future. It is something everyone is very excited about and we hope to have the cars ready to go for testing in January.

By the time you read this column I will be on my way to Germany with the Erebus Racing guys for an end of year Mercedes SLS dinner.

We’re going along because I did the Bathurst 12 Hour with those guys this year and we finished second. Being part of a dinner where they recognise teams from around the world should be quite cool.

Then it’s looking ahead to Christmas – we’re off to Sydney, then Adelaide and I’ll probably squeeze in some Sprintcar racing as well!

But before signing off, a big thanks to all the boys, Ross and Jimmy and everyone at Stone Brothers Racing for their efforts on making this year what it was.

For more on Tim Slade and Lucky 7 Racing: www.luckyseven.com.au