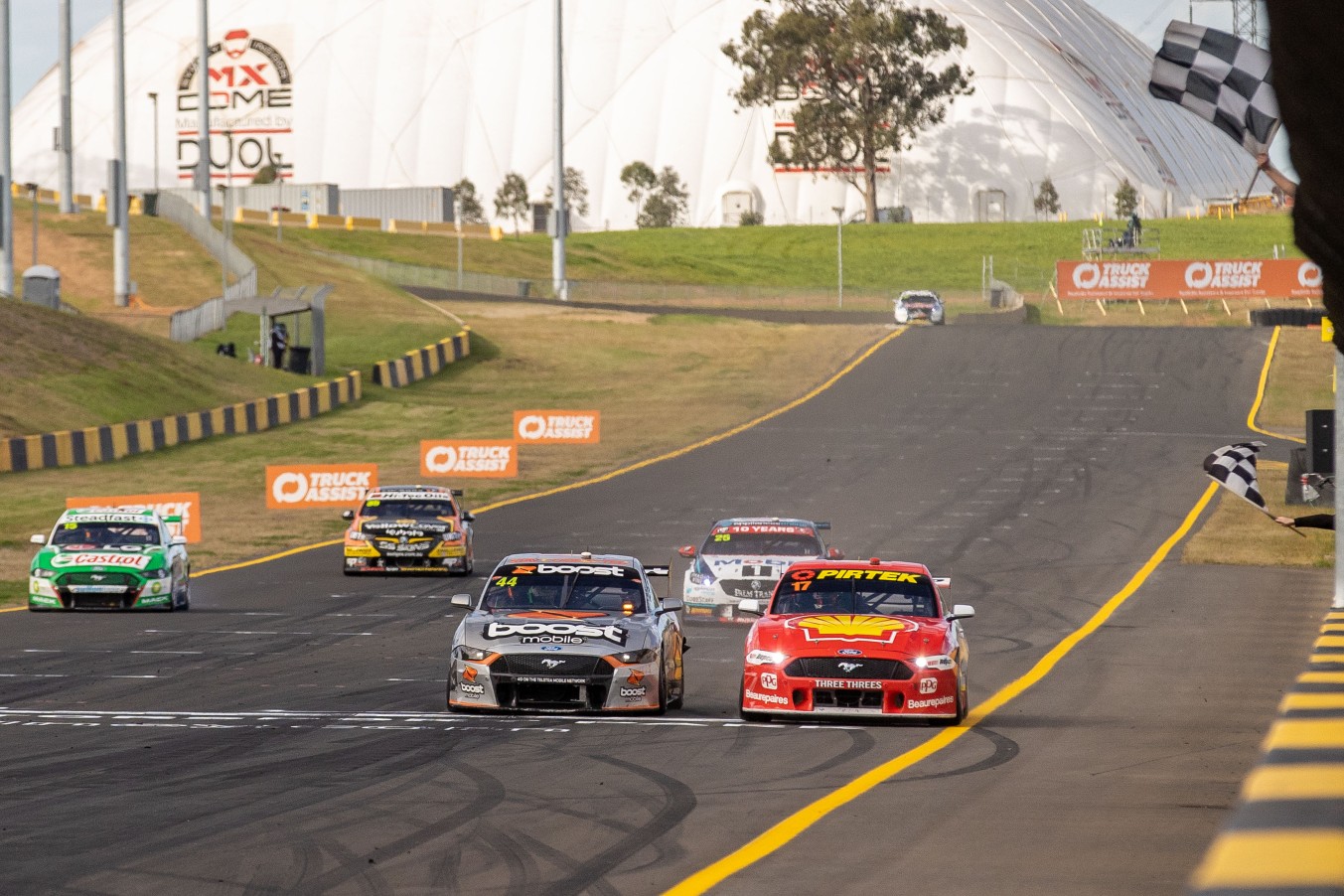 With the 2021 Repco Supercars Championship fast approaching, teams and drivers will be preparing for another intense assault on the best circuits in Australasia.

Fans can bet their bottom dollar that final-lap battles will decide several races this year.

That was the case in 2020, with no shortage of high-intensity racing and heart-stopping finishes.

Just over seven weeks remain until the Mt Panorama 500 commences the new season, with 32 races set to decide the championship.

Ahead of the highly-anticipated 2021 championship, Supercars.com has listed the seven best last lap thrillers of 2020.

In a breathtaking return to racing in Sydney following the COVID-19 season suspension, Scott McLaughlin and Shane van Gisbergen were split by just 0.188s.

Van Gisbergen had a better initial launch off the front row, but pole man McLaughlin regained the lead around Turn 1.

McLaughlin extended his lead to nearly four seconds, but van Gisbergen closed the gap before the #17 pitted on lap 15.

The #97 stopped three laps later, and had to cut a three-second deficit to McLaughlin after having to clear Lee Holdsworth and Jamie Whincup.

Van Gisbergen caught McLaughlin and hassled him all the way to the chequered flag. Such was McLaughlin’s defence, that he was slapped with a bad sportsmanship flag for kerb overuse.

Nick Percat clinched another Sydney win, but behind him, Scott McLaughlin pulled off a final-lap masterpiece to finish third.

Brad Jones Racing opted to use two sets of soft tyres throughout the race, helping Percat to a big lead ahead over Fabian Coulthard.

However, the battle for the minor placings was off the scale as McLaughlin stole third from James Courtney on the line. It came amid a fierce battle including Chaz Mostert and Rick Kelly, with pole sitter McLaughlin recovering after starting on hard tyres.

Courtney, who didn't use any softs in Race 10, was on a charge which saw him pinch fifth from McLaughlin on lap 6.

McLaughlin stopped for softs on lap 13 and emerged about four seconds behind Kelly. As the pit cycle unfolded, Percat led Coulthard by nearly five seconds, with Courtney, Kelly, McLaughlin and Garry Jacobson behind.

Kelly and McLaughlin reached the back of Courtney’s Mustang on the penultimate lap, and Mostert joined the party.

On the final lap, McLaughlin went for a pass on the #15 around Corporate Hill and Kelly slid off the edge of the track.

McLaughlin quickly attacked Courtney and the pair dragged to the line, with the #17 edging the #44 by just 0.025s. Mostert pipped Kelly to fifth by just by 0.144s.

Sydney Motorsport Park put on another show as Jack Le Brocq emerged the victor in a four-way fight. Starting on hard tyres, Jamie Whincup got a better launch from the outside of the front row than pole man Andre Heimgartner, who regained the lead at Turn 2.

Whincup was quickly demoted by David Reynolds and then Mark Winterbottom, with Le Brocq fourth by lap 4.

Le Brocq was third by lap 8, and stopped for another set of softs on lap 11. Heimgartner and Reynolds pitted a lap later to do the same, and were split by Le Brocq when they rejoined. Heimgartner was vulnerable on cold tyres and Le Brocq nabbed him for the effective lead.

Todd Hazelwood had saved his best rubber for the race, and stopped on lap 15 before emerging an effective fifth. With the pit cycle complete, Le Brocq led by seven tenths over Heimgartner.

Hazelwood ran down Winterbottom and closed on the leading trio, with all four cars starting the final lap covered by just 0.7522s.

Hazelwood pulled alongside Reynolds and completed the move for third around Corporate Hill, with Le Brocq skipping away to a maiden victory by 0.621s.

De Pasquale led home a fast-finishing James Courtney, who clinched a podium in just his third event in a Tickford Mustang.

De Pasquale started sixth on soft tyres, and was third by lap 3. Meanwhile, Mark Winterbottom had stolen the lead off Whincup on lap 3 and quickly pulled away.

After the Safety Car was deployed following an incident between Rick Kelly and Jake Kostecki, the field jumped into the pits.

Hard-shod Whincup was released into the side of De Pasquale, who was on softs. Courtney sat third and remained on softs ahead of McLaughlin and Winterbottom, who were both on hards.

On the restart, McLaughlin nosed ahead of Courtney and attempted a redress. Penalties for Whincup and McLaughlin were later announced.

Courtney cleared Whincup and chased De Pasquale, who had stretched his advantage to three seconds. The margin was wiped out following another Safety Car period after a crash for Macauley Jones.

While De Pasquale remained firm for victory, Courtney was within a second by the end, making for a tense finish.

Scott McLaughlin was an easy winner, with Shane van Gisbergen almost 10 seconds behind. However, the battle for second remained alive until the very end.

Scott Pye was last of the front runners to pit with 11 laps remaining, and resumed in fourth. He caught and passed Fabian Coulthard for third on lap 31, and set off trying to wipe out the four-second gap to van Gisbergen.

The #20 loomed large behind van Gisbergen, who was hassled to the line and held onto second by just 0.245s.

Fabian Coulthard’s only win of 2020 came in an epic opener to the Repco SuperSprint The Bend, which featured Jamie Whincup and Scott McLaughlin being penalised for separate incidents - including one with each other.

Coulthard had to work hard for the win, having overtaken Shane van Gisbergen just two laps from home, before holding off a hungry Jack Le Brocq.

Van Gisbergen led a four-car train of Mustangs before Le Brocq went down the inside of #97 at Turn 17 on lap 18. However, Le Brocq couldn’t make the move stick and instead lost the spot to Coulthard.

Le Brocq reclaimed second when he fired down the inside of Coulthard at Turn 6 on lap 22, before an ambitious Coulthard nabbed van Gisbergen.

Coulthard held on by just 0.469s, with McLaughlin third on the line after passing van Gisbergen on lap 23. However, a penalty for an earlier clash with Lee Holdworth promoted Bryce Fullwood to the rostrum.

Shane van Gisbergen claimed a nervous win ahead of Cameron Waters in a thrilling Great Race, with the end margin between the pair just 0.866s.

It came down to the final lap of 161, with van Gisbergen forced to hold off Waters after two late Safety Cars.

Rain arrived shortly before a Safety Car restart on Lap 54, with van Gisbergen climbing past the pole-winning #6.

The final stint of the race was highlighted by a tense battle between van Gisbergen and Waters, the pair running within a second of one another.

After dropping Waters in the closing laps, van Gisbergen’s advantage was wiped out twice following a Safety Car triggered by separate incidents for Jack Smith and Bryce Fullwood.

The Safety Car was again deployed when Zane Goddard crashed, setting up a three-lap dash to the flag. Waters tried everything, but van Gisbergen held on for a famous victory.