Shane van Gisbergen has claimed a record-equalling sixth straight win in 2021 in an assured performance at Symmons Plains.

Van Gisbergen’s bid for victory came after he managed to recover from a poor start to regain the lead from Cameron Waters early on.

Waters led the early stanza of the race, only to be overtaken at Turn 6 by the championship leader.

The early laps suggested van Gisbergen’s winning run would be halted, with Waters forcing his way into an early lead.

Whincup demoted van Gisbergen to third, only for the #97 Red Bull Ampol entry to assume second in quick time.

Waters led, but van Gisbergen kept a watching brief in second before pouncing for the lead at the end of lap 9.

The Monster Energy Mustang fell into the clutches of Whincup, who made a bold move at Turn 6. 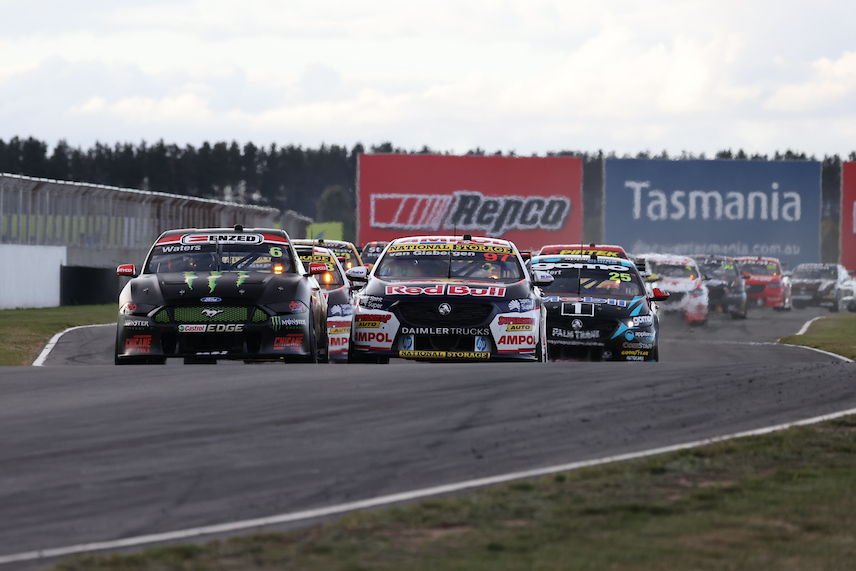 Chaz Mostert, who started third, followed Whincup through, albeit with a locked front tyre.

At the end of lap 17, Whincup was the first of the leading group to pit.

Waters stopped on lap 21, and was undercut by both Shell V-Power Racing Team Mustangs, with Anton De Pasquale firming for a first podium for his new team.

Mostert was also undercut by the Shell Fords after his lap 22 stop, but managed to leapfrog Waters.

Van Gisbergen pitted on lap 23, and having managed his tyres to perfection, emerged ahead of Whincup to retain the Red Bull Ampol one-two.

The formation remained until the chequered flag, van Gisbergen cruising to victory in the 44-lap sprint by over four seconds.

De Pasquale defied Mostert to clinch his maiden Dick Johnson Racing podium, with Will Davison holding onto fifth ahead of Waters.

Mark Winterbottom and Scott Pye made it a Team 18 seven-eight, with Erebus Motorsport duo Will Brown and Brodie Kostecki completing the top 10.

However, the attention turned to van Gisbergen, who joined Allan Moffat and Mark Skaife as drivers to have won six straight races to open a season.

“It was a bad [start], then Jamie pulled a nice move and got me,” he said.

“Did some big bombs at the end of the straight and got them back, it was fun racing at the start.

“Just tried to build a gap and manage it, but burnt up the rears, which puts us in a bit of a spot for tomorrow.

“Our car’s awesome, it’s really cool to be a part of it."

Van Gisbergen will take a 153-point lead over Whincup into Sunday, which will feature two 44-lap sprints.

Whincup scored the five bonus points for setting the fastest lap of the race, a 51.4986s on lap 5.

The field will return on Sunday for Race 7 qualifying at 10:45am AEST.