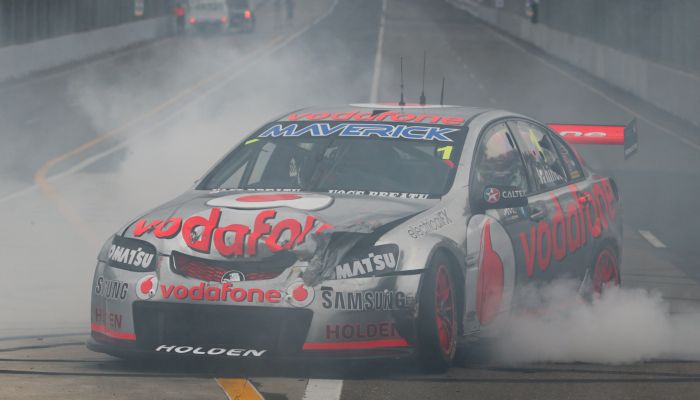 TODAY on Saturday Sleuthing we’re not focusing on one car from the V8 Supercar ‘Holden versus Ford’ era that came to a close at last weekend’s Sydney Telstra 500.

With much written about Jamie Whincup’s record-breaking #1 TeamVodafone Commodore known as ‘Kate’ in recent months, plenty of mail has flowed in to our V8 Sleuth asking what other chassis have been successful in the V8 Supercars Championship.

As always, we have the answers and have compiled the top 10 ‘most winning’ cars from the ATCC/V8SC from 1993 onwards when the five-litre rulebook (later to be known as V8 Supercars) was introduced.

Naturally, there will be arguments over which car (and indeed driver!) was better and that some cars had the advantage of more races to compete in during their active era.

But the fact remains that winning races is the only marker of success in motorsport that really matters!

So here, in the order of their wins, are the most winning cars in the period of 1993 to 2012 in the Australian Touring Car Championship/V8 Supercars Championship.

#1 – 888-023 – 28 race wins
This Triple Eight-built Commodore has taken all before it since Jamie Whincup debuted it in Abu Dhabi with victory in 2010. It only ran in the first half of 2010 – and just as well given it could have claimed more race wins – but has gone to claim the last two championships as well as Bathurst this year.

Since last weekend’s Sydney Telstra 500 it’s been confirmed that team boss Roland Dane and Whincup have done a deal for Jamie to purchase the car.

Among its 25 race wins was a victory in the 2004 Sandown 500, though a Bathurst win went begging from the car’s resume.

Involvement in the massive accident at the Mountain in 2005 with Greg Murphy at least leaves it as a part of Bathurst history in one way!

We’ve previously covered this car on Saturday Sleuthing and it’s retained by SBR in Queensland with the long-term goal of restoring it back to Ambrose/Pirtek spec and livery.

#3 – HRT 045 – 20 race wins
Mark Skaife loved his ‘Golden Child’ car so much that he actually still owns it! A Commodore VX originally, it helped Skaife claim the championship in 2001 and 2002 and conquered the Mountain in each of its title-winning seasons with Tony Longhurst and Jim Richards co-driving respectively.

Converted to a VY Commodore for Project Blueprint rules in 2003, it also won that year’s Clipsal 500.

Check out our previous Saturday Sleuthing story on this car with Mark Skaife here talking about it:

#4 – HRT 041 – 16 race wins
Perhaps the ‘quiet achiever’ of race wins over the V8 Supercar era, this car started as a HRT chassis with Mark Skaife when it made a victorious debut at Oran Park in 1999.

It swapped into Craig Lowndes’ hands for 2000 and he ran it for the first part of the season before it became Jason Bright’s when he joined HRT in 2001 and won that year’s Clipsal 500.

It moved to Kmart Racing and became Greg Murphy’s car that he used to win the first-ever Pukekohe round before having further history with the Young Lions, Team Brock and PWR Racing.

Sadly it was the car Mark Porter was driving when he lost his life at Bathurst in 2006.

#5 – HRT 043 – 15 race wins
For all of its race wins, this chassis is really only remembered for one single lap – Greg Murphy’s pole-winning effort at Bathurst in 2003 the day before he and Rick Kelly went on to win The Great Race.

It’s often overlooked that this car was originally a HRT Commodore and won the 2000 Queensland 500 with Lowndes/Skaife before Skaife drove it for the first half of his championship winning season in 2001.

Restored to its #51 Murphy/Kelly Kmart livery and spec, it appeared at this year’s Supercheap Auto Bathurst 1000 50th Year Celebrations.

Click here to read a story on the restoration of HRT 043 ahead of this year’s Bathurst:

#6 – WR 004 – 15 race wins
Garth Tander’s 2007 championship-winning Toll HSV Dealer Team Commodore makes it to sixth on the list and achieved the rare feat of winning all of its races in the one single season!

Not many people will have noticed but the same chassis was in action this year at Bathurst – it was the Shannons Supercar Showdown car of Jesse Dixon and Cameron Waters.

#7 – HRT 031 – 14 race wins
Originally a Tomas Mezera HRT Commodore VR, this car was the one Craig Lowndes used to claim his maiden ATCC race and round win under lights at Eastern Creek in 1996.

He did further winning aboard it before debuting the infamous ‘petty bar’ car and then it came back out of the workshop the following season after Greg Murphy’s nasty accident at Phillip Island in the aforementioned ‘bar’ car.

Its winning continued in the hands of Jason Bargwanna in 1998 at Calder and Garth Tander in 1999 at the same circuit.

#8 – WR 007 – 14 race wins
Built new in 2008 by Walkinshaw Racing and driven by Garth Tander as the #1 Toll HRT Commodore VE when he joined the factory team as champion, this chassis achieved greater notoriety for its roll-over in the Chase at Bathurst on the opening lap of the 2010 race in the hands of Fabian Coulthard.

Before it went rolling down the road, it had claimed a range of wins in the hands of Tander in 2008 (including the Phillip Island 500 with Mark Skaife), 2009 (including the inaugural race at Sydney Olympic Park) and 2010 (the Clipsal 500).

#9 - 888-010 – 13 race wins
The first car built by Triple Eight Race Engineering to win a race in the V8 Supercar Championship (at Eastern Creek in 2005 in the hands of Craig Lowndes), this is one of the team’s most-loved cars.

It claimed that emotional first Peter Brock Trophy at Bathurst in 2006, won the Sandown 500 in 2005 and 2007 and now has been restored to its ’06 Bathurst spec and livery.

The last of the team’s BF Falcons, it claimed victory at Bathurst in 2008 and took Whincup to his first championship later that year at Oran Park.

It’s been a hell of a last two decades, but it all starts with a clean piece of paper next year with 28 all-new cars on the grid at the Clipsal 500 in Adelaide – and among them, four Nissan Altimas and three Mercedes-Benz AMG E-Class racers.

The V8 Sleuth can’t help but lick his lips at all of this new hardware!

Have a car from V8 Supercar history – or indeed perhaps Australian touring car history – that you’d like to read about or find out where it ended up?

Email ask@v8supercars.com.au and we’ll add it to our files to go in search of.

Saturday Sleuthing has become our regular story covering the histories of V8 Supercars (and indeed some of their predecessors) every Saturday on non-race weekends on the BigPond Sport website.

We’re running out of Saturdays for the 2012 season, so make sure you flick us an email with your thoughts and if you have any cars you’d reckon would make great stories.