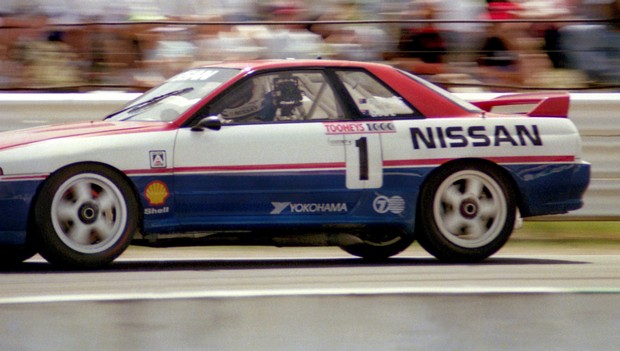 The 1991-winning GT-Ris back in Australia with a restoration underway by the same team that put ittogether over 20 years ago. This is the story of a very important car in localracing history.

There’s an increasing volume of email that relates to GroupA cars and today we have a very special story for you that relates to anhistorically-significant car in Australian touring car racing that has a linkwith the current V8 Supercars Championship.

The return of Nissan to Bathurst this October will be veryspecial with its four-car Altima squad and it’s completely appropriate that we bringyou – for the first time – the story of the restoration of the first Nissan towin the Bathurst 1000 in 1991.

It also continues on from our Gibson Motorsport theme fromlast week and is especially timely given it’s the re-born GMS operation underFred Gibson and Alan Heaphy that has been entrusted with the completerestoration of the car that Jim Richards and Mark Skaife took to victory atMount Panorama 22 years ago.

Not only was the GT-R the first Japanese car to win theBathurst 1000, but it did so in record time – in fact the mark of 6 hours 19minutes, 14.8 seconds took nearly 20 years to be topped (by Craig Lowndes andMark Skaife in 2010).

‘Pharn’, as he was known, had earlier sent a Japanese-builtGT-R to GMS for extensive modification and had achieved success back inThailand, which led to a request for Gibson’s team to prepare a car to race inThailand and Malaysia prior to competing in the Fuji round of the ’92 JapaneseTouring Car Championship.

While GMS had a busy workload in 1992 with its regularracing program, it agreed to supply a car, spares package and technical staffon a race-by-race basis.

Both Gibson and Skaife travelled to Bangkok with the car toprovide driver and technical training with GMS staff starting to rack up plentyof frequent flyer points attending local race meetings to support the localcrew.

There’s no doubt Pharn did things properly – even when hecrashed the car at a race in Malaysia, it was air freighted back to GMS inMelbourne for a front-end body and mechanical rebuild!

The car then competed in the Fuji 500 late in 1992, which was something of aproblem given it clashed with the Australian Grand Prix Group A support eventin Adelaide, where Jim Richards was driving a local car in the swansong of theGT-R in Australian competition.

“We had sent a strong crew to Japan to support the ThailandGT-R and were constantly talking to them as the weekend unfolded, discussingthe problems they were encountering with tyres and fuel. Frankly, I’m glad Iwas here in Australia!”

After issues with tyres and fuel, the car (driven by Pharn andM. V. Manitto) the car finished in the top 10, six laps down on the winning cardriven by regular Gibson Bathurst endurance driver, the late Swede AndersOlofsson, who had combined with Neil Crompton only a matter of weeks earlier tofinish third for GMS at Bathurst.

The 1991 Bathurst winning-car then sat in storage in Bangkokfor the next 15 years before contact with a Singapore colleague, a series ofphone calls and confirmation from Gibson himself that the stored car was indeedthe Bathurst winner, which led Robert Ingram to purchase the twin-turbo rocketship in mid-2007.

The GT-R has been returned to Australia and added toIngram’s racecar collection, which includes the 1990 Bathurst 1000 pole-sittingANZ Sierra driven for Allan Moffat by Klaus Niedzwiedz and Frank Biela.

The rebuild of the 1991 Bathurst winner has been entrustedto the re-born Gibson Motorsport, including the rebuilding of the RB26DETTengine, driveline and suspension. Even the original painter – Graeme Cochraneof Auto Innovations – is returning it to era correct paint in the white andblue of the Nissan works entry from ’91.

“GMS has a reputation for building the world’s fastest GroupA GT-Rs and I can think of no one better to oversee the rebuild than Fred andAlan,” Ingram said of his decision regarding the restoration.

This car remains historically significant given itsBathurst-winning pedigree. The GT-R model itself was the ultimate Group Atouring car from the period of international rules in Australia from 1985 to1992 and we look forward to seeing the finished product as the restorationunfolds.

Nissan Motorsport will return to Bathurst this year with afour-car Altima squad, marking the first local factory-backed assault on MountPanorama since the infamous Jim Richards/Mark Skaife wet weather win of 1992.

The team will run a pair of Jack Daniel’s cars for RickKelly/Karl Reindler and Todd Kelly/David Russell as well as a pair of Nortonentries for Michael Caruso/Daniel Gaunt and James Moffat/Taz Douglas.

29/05/2013
Stay In The Know
Sign up to the Virgin Australia Supercars Championship Newsletter
This website uses cookies to improve your user experience. By continuing, you will be providing your consent to our use of cookies.Ok