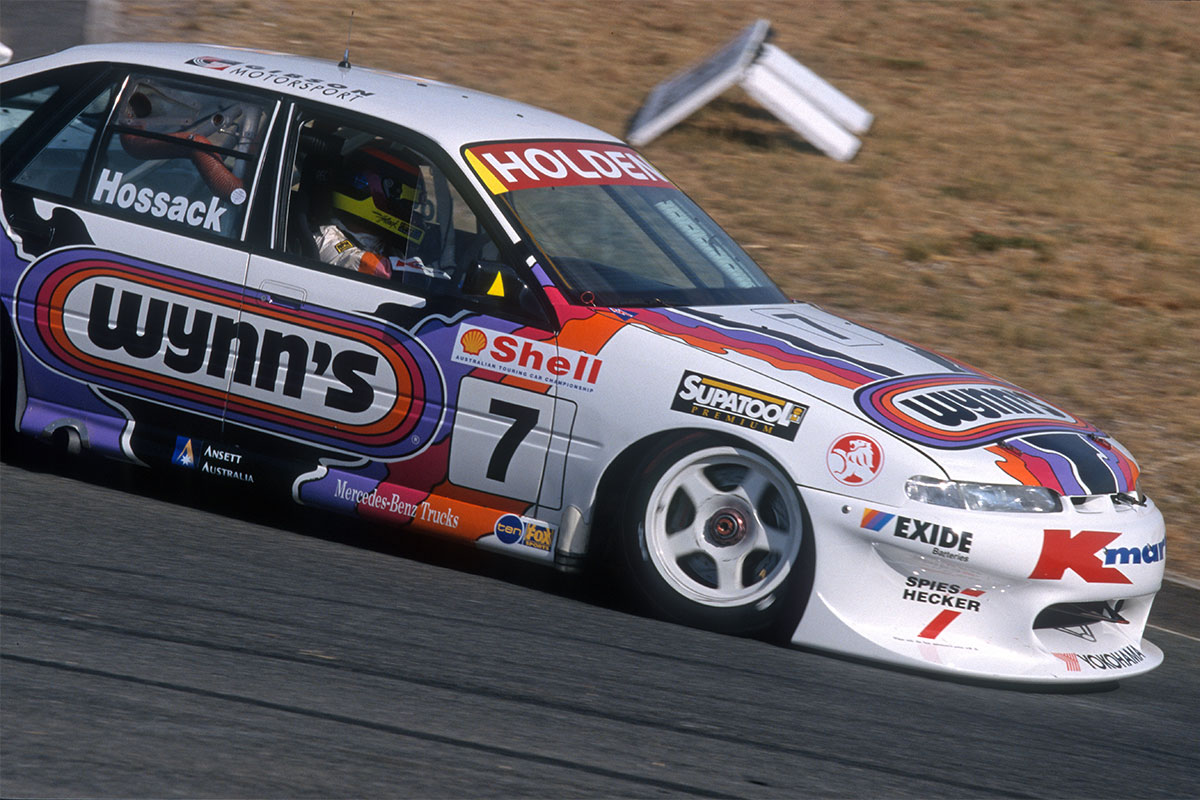 Darren Hossack arrived in Supercars via what is now a traditional career progression path, but he took far fewer steps along it than most.

The multiple karting champion debuted in a Wynn's-backed Holden Commodore for the first V8 Supercars-era race at Calder Park in 1997.

Prior to that, his car racing experience amounted to a title-winning season of state-level Formula Ford and some Sports Sedan racing.

The 1997 season proved to be his only full campaign in the championship but, as he revealed to Saturday Sleuthing, it gave Hossack a special memory courtesy of the King of the Mountain.

What does an average day look like for Darren Hossack in 2019?

Quite a bit of variety, really. There's quite a bit of work for Driver Dynamics, which is everything from defensive driver training to counter-terrorist training with the Army.

I work with Kel Treseder with the Aussie Racing Cars, and I've got another young bloke in Formula Ford that I help out locally.

Then I make bespoke componentry when people might need a special airbox, oil tank or bracket. I just really enjoy making stuff for racecars. 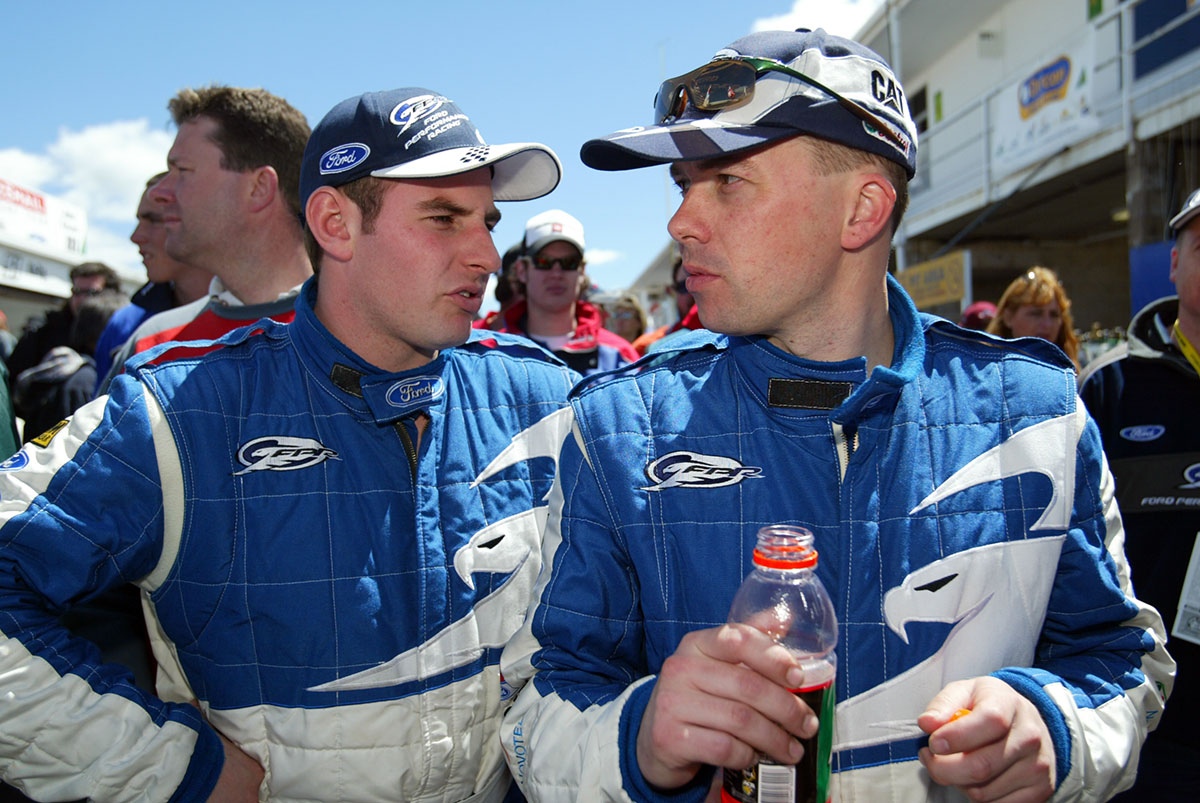 My dad used to race cars back in the '70s, Group A sportscars as they were back then.

I always loved karting, so the moment I was old enough to drive and afford one I bought a go-kart and started racing.

I met Peter Macrow and his son Adam (Macrow, left above with Hossack in 2003) was sponsored by Drew Price, and by chance Drew needed someone to work there.

I'd done my tool-making apprenticeship and was between jobs, so I ended up going to fill in at DPE for two weeks – which ended up being six years! 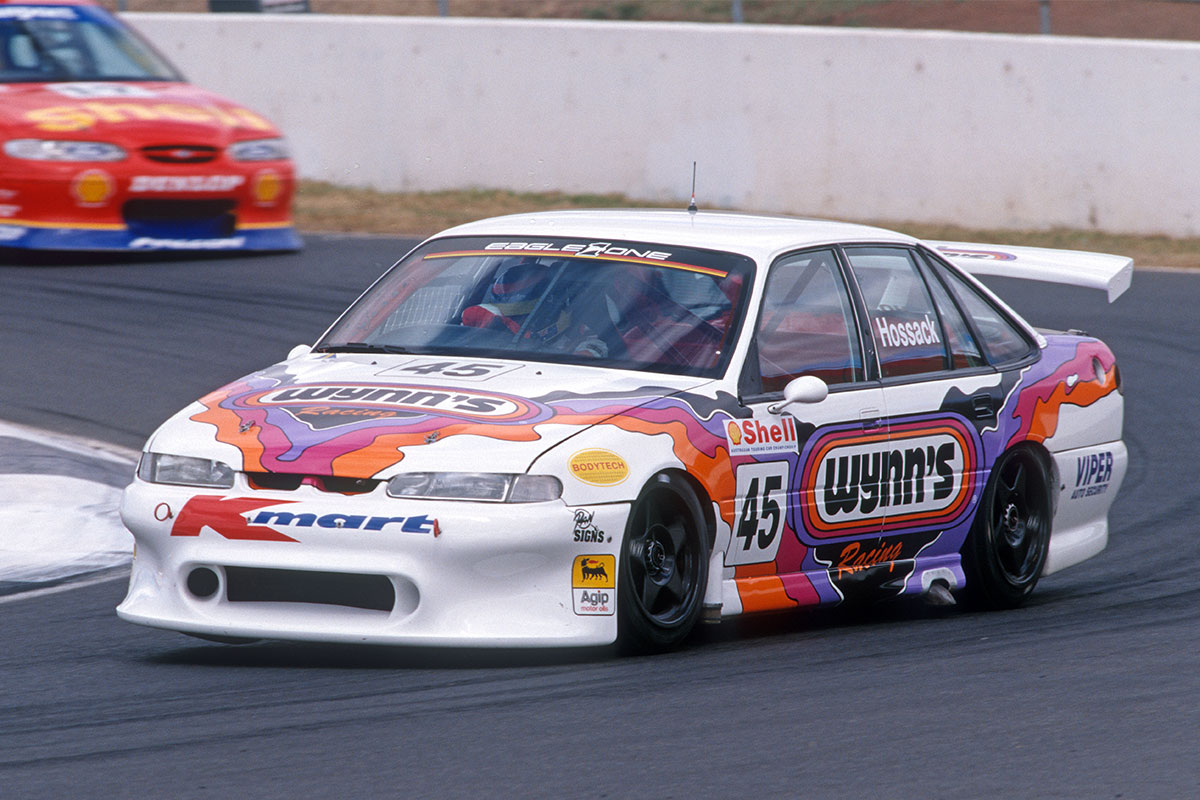 You arrived in Supercars at the start of 1997 in a Wynn's-backed Commodore. How did that all come together?

Through working at DPE, when I was the current national champion, I met Garry Dumbrell.

Paul [Dumbrell] was starting out in karts and Garry wanted someone to help him.

I also was racing Sports Sedans in a little Gemini with a rotary engine, and around that time Brad and Kim Jones, who I was friends with, offered me a drive of their two-litre touring car (Audi A4 quattro).

It was a test with myself, Cameron McConville, Christian Jones and Darren Pate.

Cam got the drive, but out of that Garry said 'well, why don't we go motor racing ourselves?'

Long story short, we purchased Garry Rogers Motorsport's ex-Gibson Motorsport Commodore and got John Faulkner to run it for us.

The plan was only to do sporadic rounds, but we ended up doing every round in '97. 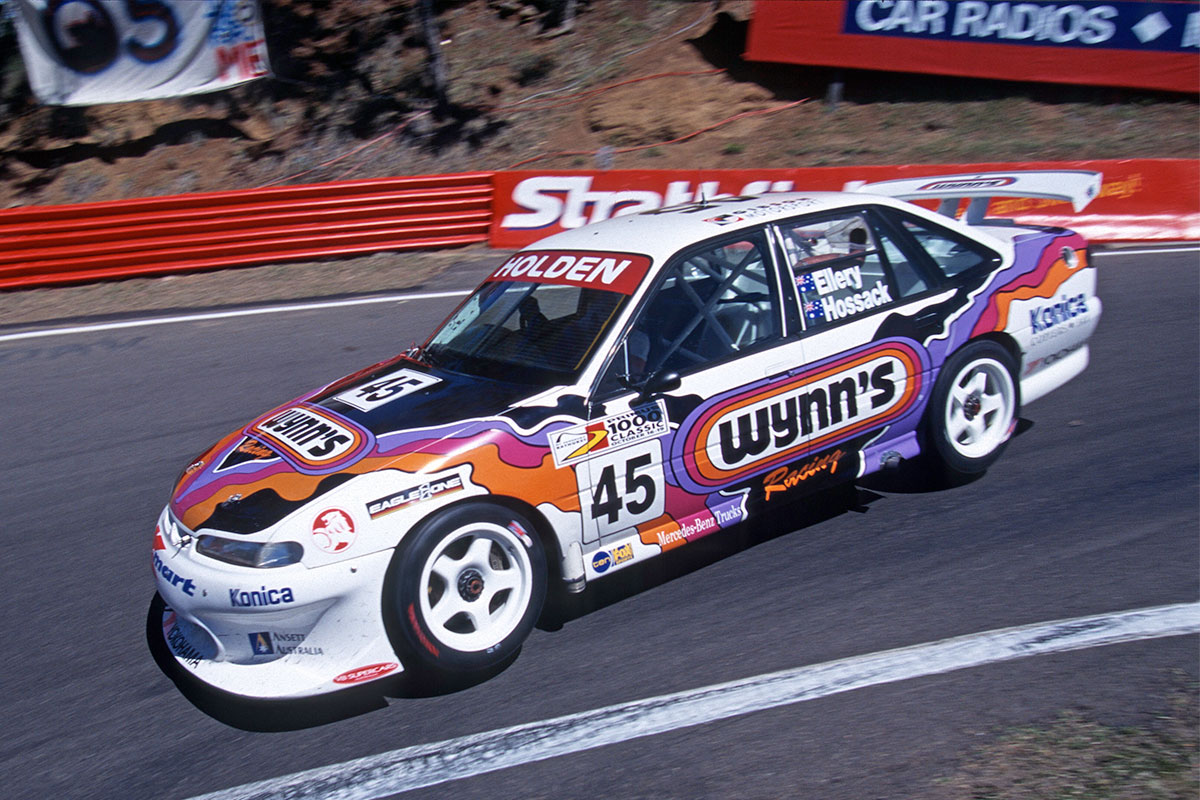 You raced in the Bathurst 1000 for the first time that year, and you and Steve Ellery came home sixth! What do you remember from that day?

I know everybody's got their 'shoulda, coulda, woulda' experiences, but we were potentially on for a better finish.

I got this massive vibration going down Conrod and I said to Fred [Gibson], 'I reckon I've done a tailshaft, I'm coming in'.

The grease had come out of the tailshaft and it had started doing a centre bearing but, because it happened quickly and I came in, they couldn't see any residue.

They put Steve in the car and sent him out, but he came straight back in and said 'no, the vibration's really bad'.

They quickly swapped the tailshaft and we went back out and managed to finish sixth.

In the Sandown 500 that same year we were running fourth in the wet.

Fred said, 'Hossack, eight laps to go', so I counted eight laps down, but I couldn't see the chequered flag.

I got on the radio and then Fred's like, 'I've stuffed up Hossack, keep going!'

As he said that, I aquaplaned at the end of the straight, locked up, backed it into the fence, and we ended up coming eighth.

That was another one where you think, 'well, things could've been different...'

But I'm extremely grateful that I've been able to do what I've done. 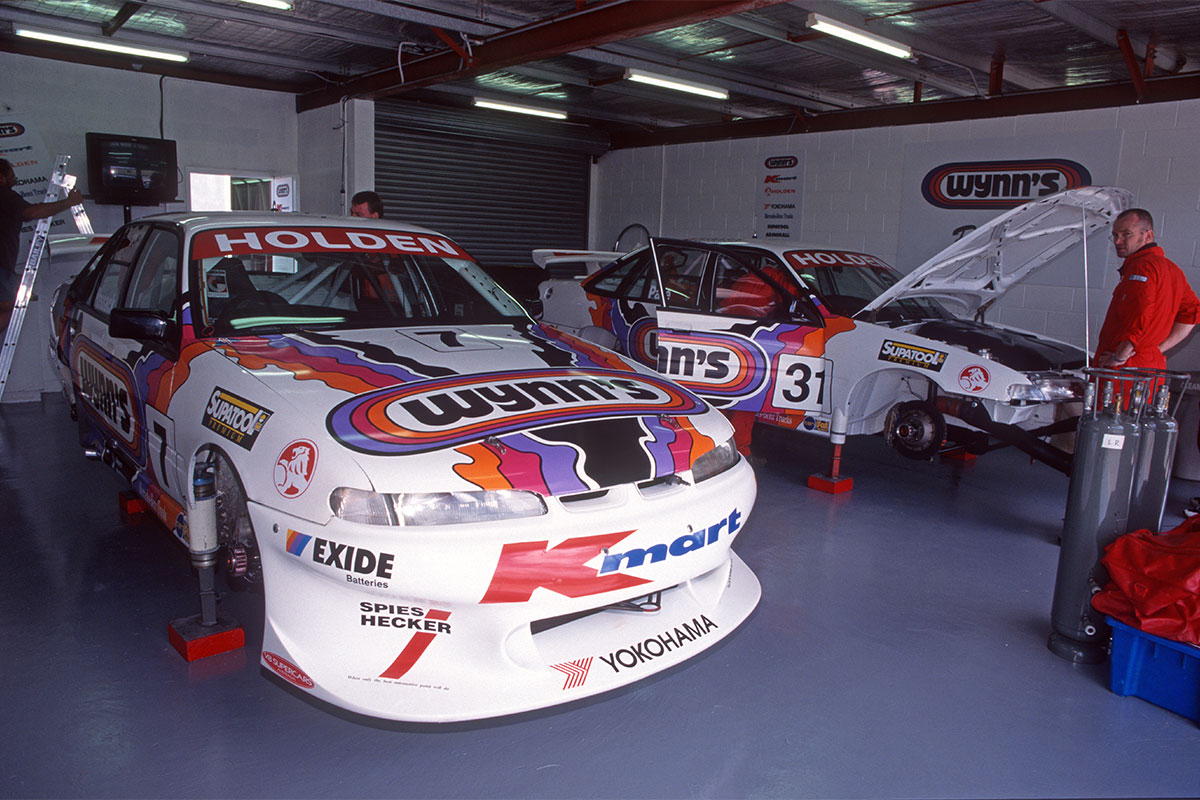 There was a bit of expansion at Gibson’s for 1998 with two Wynn’s cars for you and Darren Pate plus Steve Ellery in the Holden Young Lions car.

It looked like that year was a bit tougher for team, and you ended up sitting out the tail end of the season. What happened?

It's no secret that the performance wasn't where one would like it to be.

Not making excuses or anything, but we had Yokohama tyres and they certainly weren't as good as the Bridgestones, so it made it difficult.

We were probably one year too early – in '99 it went to a control Bridgestone tyre.

Tomas Mezera was not long out of the Holden Racing Team at that time, very accomplished and experienced.

I remember sitting in a hotel room and having that discussion with Garry.

I was pretty disappointed, but by the same token I'd been used to winning in most things that I drove and we were languishing a lot of the time.

More importantly, things didn't seem to be getting any better. So, quite rightly, he put Tomas in the car.

From memory his results were no better than what Patey and myself were getting.

I was back in the car for the endurance races, then at the end of '98 I was back in Perth visiting my now-wife Mel.

I went into a newsagency and picked up a motorsport publication, and it had a picture of Steve Richards and Greg Murphy on the cover with the Wynn's Commodore.

So I sort of realised there and then that I was out of a drive; not unemployed, because Garry always said that as long as I wanted to work for him and didn't care what I did, I'd always have a job.

I'm not dark on it at all – I mean, Garry was the reason I got into Supercars – but it wasn't a nice way to find out.

But that's life. What doesn't kill you makes you stronger. 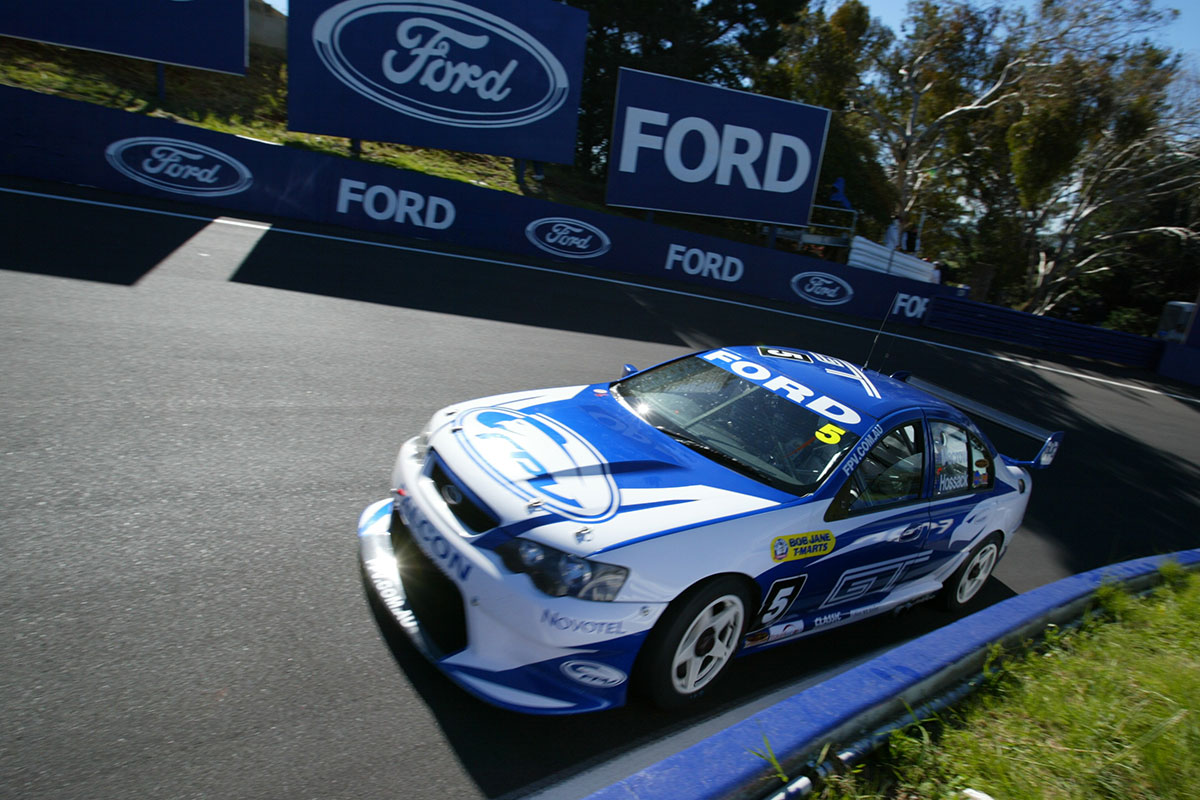 Your last Supercars drives were at the 2003 enduros with Ford Performance Racing. How did that come about?

It came about in a really sad way. There was myself, Adam Macrow and Stewart McColl that were going to test for the drive at Phillip Island.

Unfortunately Stewie crashed (in a GT Production race) and lost his life, so Adam and I got the drive in the #5 car.

Unfortunately I ended up crashing the car at Bathurst.

It was my fault. It was back in the day when there was the sand trap at Skyline.

Someone had been through all the sand, and I reckon I was the first car on the scene with the track covered in sand. 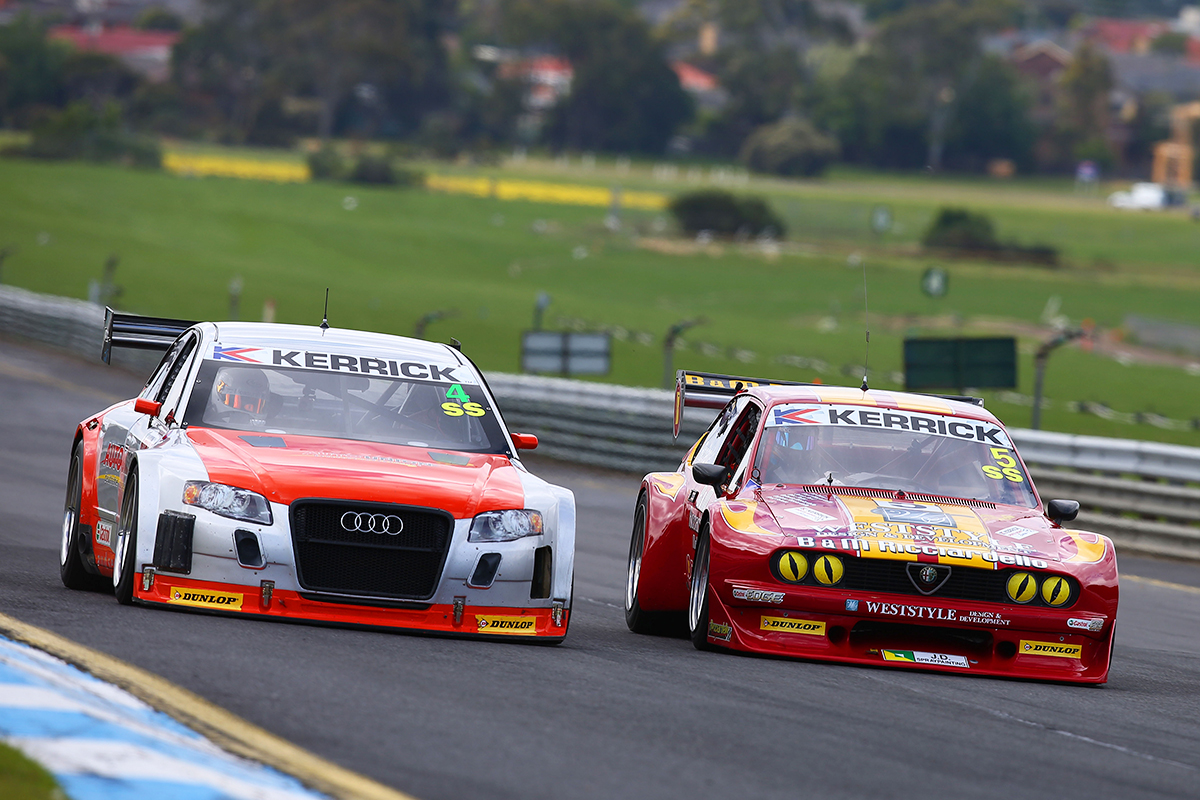 You went on to win several national championships in karting and Sports Sedans. But we haven't seen you out there in a couple of years. What are you racing now?

In '99 I met John Gourlay, and I'd always admired the black Saab he had; then the bloke that's got one of the fastest Sports Sedans in the country asks you to drive his car.

We had a relationship for 16 years, which only really ended when I went and busted myself up!

I was racing speedway and I had a crash in a wingless one night (in 2015) and broke both my legs.

Those Sports Sedans are pretty fast and you start thinking, 'well, if the throttle jams here, this may not end well...'

When you start thinking like that, a bit of self-preservation comes in and your reflexes are getting slower too.

I thought I was past the best of my driving, so when I hurt myself John put Jack [Perkins] in the car and that ended up being a good relationship.

Things have panned out where John was looking for another young driver to help out and, through my involvement with many years of working at DPE, I was able to align Jordan Caruso with the drive.

I've got a little Mazda RX-2 Group N car that I'm just going to go and have some fun racing my mates with! 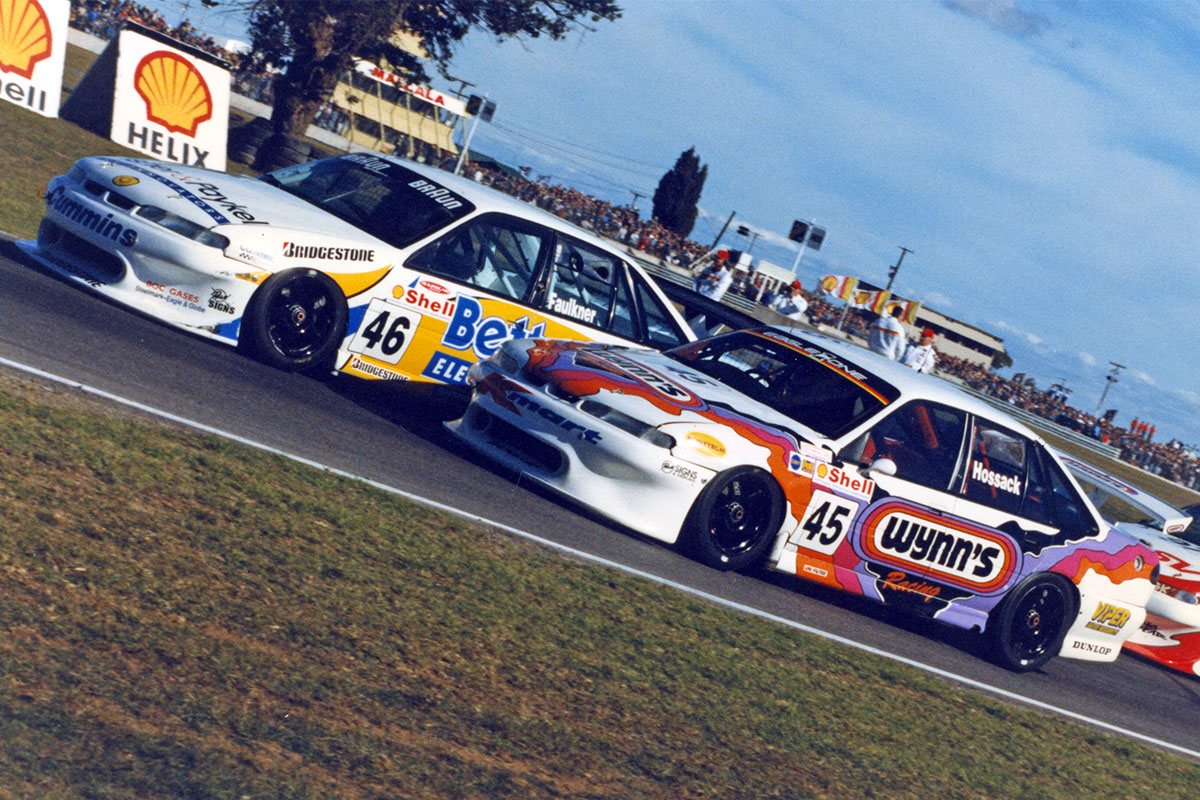 There were a lot of things we did outside the racecar that were cool.

We did some TV commercials, took Mick Molloy around Sandown one year, same with the Collingwood coach of the time. Things like that, just meeting some cool people.

In terms of the racing, there were the little wins that no-one else notices.

I remember it raining at Mallala during the morning warm-up and I think I was second-fastest in the wet.

When you're typically running 12th or 14th, running P2 in the wet – the great equaliser, as they say – it makes you feel a little bit warm inside, that maybe I'm OK at this.

But my absolute best moment in Supercars?

I got to know Peter Brock, and he came up to me one day at Eastern Creek and said, 'you know, I reckon you can drive'.

I thought, you know, coming from Peter Brock, that's not too bad.

When we went out on the track to drive around to the grid, here comes Brocky in the HRT #05 Commodore; he pulls up next to me, slows down and gives me the thumbs-up.

Probably out of everything that I've done, those few moments...

He wouldn't even remember it if he was still around today, but when you're a young bloke trying to cut your teeth, having an icon like Brock say that, I reckon that was the best.