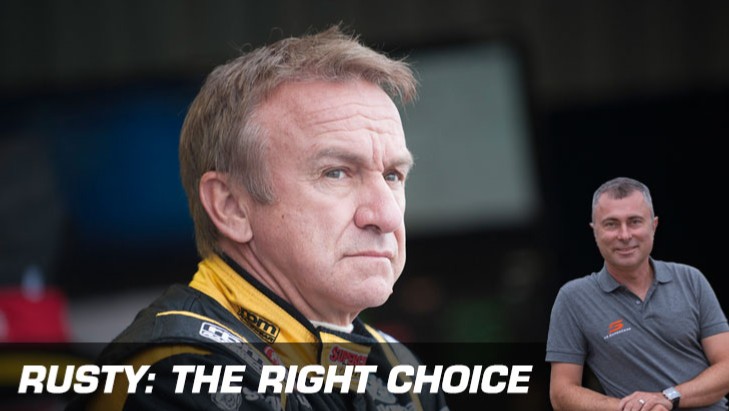 The debate about whether Russell Ingall was the best pick to jump in the Holden Racing Team Commodore in James Courtney's absence has ramped up in recent days. The question is - has 'The Enforcer' still got it?

Former 500CC MotoGP winner Daryl Beattie said on Ten's RPM on Sunday someone younger should be given the opportunity.

"I think Russell's a great guy but when I heard that news I thought why has Russell been given that drive?" Beattie said.

"I kind of see that in the position the team (HRT) is in right now, and I might be completely wrong, but why wouldn't you give it to a young driver, that has very little experience, that maybe has a chance down the track, to have a crack in V8s ... let them have a burn ... it doesn't matter where the car finishes now does it?"

I've known Daz a long time. If a similar set of circumstances created an opening with a top-flight MotoGP team I reckon Beattie would feel the same - try an up-and-comer with talent, give them a shot.

FOX SPORTS pundit Ingall has clearly bristled and perhaps feels the comments were born out of the program's want to say something controversial rather than having a basis of fact, judging by a Twitter exchange between the two.

So the question remains - was Ingall the right choice?

Names like Patrick Long and Ryan Briscoe were considered. Greg Murphy ruled it out on Sunday afternoon at Sydney Motorsport Park because of his V8 broadcast commitments.

Russell, let's not forget, has only been out of these cars for just over six months, so he has good, recent COTF experience. That must be an important factor in this decision.

And bringing the names Ingall and Perkins together again is clever play from Holden and HRT. Can Jack recreate some of the magic we saw in the '90s when his famous father Larry and Russell paired together?

While I'm all in favour of giving young drivers a chance, and there are such limited opportunities in our sport to do that at the moment - I can understand why the team has gone down this path.

Russell is a gritty racer who will make the most of this opportunity and, now that he's been poked, I get the feeling he'll let his driving at the Wilson Security Sandown 500 prove any doubters wrong.

Was Russell the right choice? Or should a young driver have been given the chance? If so who and why? Let us know below on v8supercars.com.au and stay tuned to tonight's episode of Inside Supercars for a chat with Ingall, on FOX SPORTS 506 at 7.30pm.