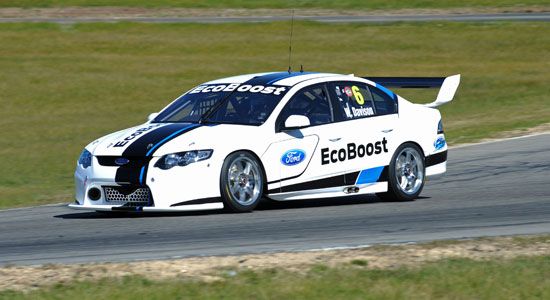 THE Holden Racing Team and Ford Performance Racing will conduct extensive Car of the Future testing, side-by-side for the first time at Winton Motor Raceway today.

Both teams completed an initial shakedown of newly completed cars yesterday ahead of today’s extensive test which will see three new-generation Falcons and two Commodores take to the track.

“It will be good to run three cars in anger and benchmark ourselves against HRT who are also testing,” says Edwards.

“It’s the first time anyone has run out with any of the teams with Car of the Future.

“We’ve all been standing around in isolation up until this point – wondering are we quick? Are we slow? Who knows?

“We’ve got a very extensive list of things the guys will be working through. All three cars will be doing a different test so we can evaluate as many different things as possible.

“Fortunately the weather is looking good and we should have a good day’s running.”

Edwards concedes it’s been a massive achievement to build three cars in time for the scheduled test.

“If you’d asked anyone a few months ago – the majority would have said we’d struggle to get three cars on track in December.

“Even when we got the first car running it was a sense of achievement. To now have three of them and a fourth one going to paint within the next 24 or 48 hours – the shell is complete and we’ve got lots of the bits all queuing up to be put in it – I think we’re trucking along all right.”

Will Davison, Mark Winterbottom and David Reynolds will be joined by recruit Alex Davison who is also expected to get some time seat time.

Holden Racing Team drivers James Courtney and Garth Tander will be on track testing their new Commodores, including one that is making its debut.

Also on track yesterday was Garry Rogers Motorsport drivers Alex Premat and new signing Scott McLaughlin who enjoyed his first run in the team’s Car of the Future. The team won’t be returning for a further session today.

06/12/2012
Stay In The Know
Sign up to the Virgin Australia Supercars Championship Newsletter
This website uses cookies to improve your user experience. By continuing, you will be providing your consent to our use of cookies.Ok