Reynolds “driving for his career” 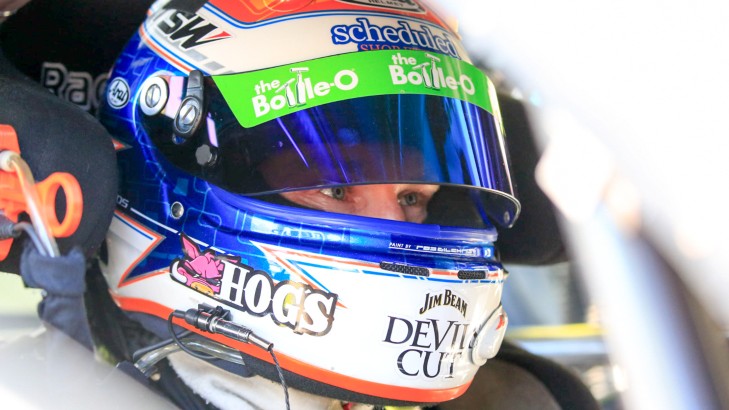 Prodrive Racing Australia boss Tim Edwards has declared David Reynolds is "driving for his career" in 2015.

The Bottle-O Ford Falcon driver is under pressure to bounce back from a disappointing 2014 and Edwards says he expects him to deliver more aggression on-track, be more serious off it and deliver a championship finishing position inside the top 10.

Reynolds, 29, is in the final year of his current deal with PRA.

He finished only 15th in the championship last year after breaking through for his first race victory in 2013 and finishing ninth in the title (as he did in 2012).

"He (Reynolds) knows he is driving for his career," Edwards told v8supercars.com.au. "He won't mind me talking about it because he knows he has to do a better job.

"He is not happy with how he performed last year and we think he has the ability to do a lot better and so does he.

"He needs to be aggressive," Edwards added. "Sometimes he can almost be too much of a gentleman on the racetrack. It's going to make you a popular guy but it's not going to win you races."

Reynolds is regarded as one of the biggest and most outgoing characters in the category and that's something that Edwards identified as an issue.

"Whether you call him the class clown or whatever, he has certainly found his niche with that and the media like him for it.

"But he has also got to deliver on track, so we have been working with him to get him to focus when he is driving the car, or he is in an engineering meeting; to have that singular focus about what he needs to achieve and that is to win races."

Reynolds started his full-time V8 Supercars career with Walkinshaw Racing in 2009, swapped to Kelly Racing for 2011 and has been at PRA (or Ford Performance Racing as it was previously known) ever since driving for co-owner Rod Nash's Bottle-O satellite operation.

He and Dean Canto missed out on winning the Supercheap Auto Bathurst 1000 by a whisker in 2012 but broke through for victory on the Gold Coast in 2013.

Reynolds' best finishing of 2014 was third in the opening race at the Sydney NRMA 500.

For 2015 he starts a new engineering relationship because Nathaniel Osborne has moved up to PRA chief engineer, with Brad Wischusen moving in from Erebus Motorsport V8.

Like all the Ford drivers, Reynolds struggled with the recalcitrant FG II Falcon in 2014, but the FG X offers new hope for 2015. He will start the year in an FG II but is scheduled to upgrade to the FG X and its rehomologated aero package for the Formula 1 Rolex Australian Grand Prix.

But Edwards made it clear the team didn't expect better pace to come just from technical improvements to the cars. He stressed there had also been intense work done with Reynolds to make sure he was focussed on achieving the best results.

"We have been working with him over the summer, making sure he has mentally and physically dotted all the i's and crossed all the t's, because it's not all about putting the best car under someone, there is the mental side of the game as well."

Reynolds is one of a number of leading drivers who is out of contract at the end of the 2015 season, including Craig Lowndes, Shane van Gisbergen, Fabian Coulthard and James Moffat.

PRA's rising star Cameron Waters, who is again contesting the V8 Supercars Dunlop Series in 2015, will also be looking to step up to the main game in 2016.

But Edwards didn't want to buy into any discussions about potential replacement or succession plans.

"I am not going to talk about that, there are plenty of people knocking on the door. We are approached all the time by people who want to drive here. But Dave knows he has to do a better job. Simple as that.

"He doesn't need that added pressure of talking about other drivers. He is a racer and human being and to be able to sleep at night he has to perform. That is why he is in this industry, not just to make up the numbers."

John Bowe: Whincup has a fight on his hands