Reynolds snatched the lead at the first corner and never looked back, winning despite a late Safety Car period that threatened to leave him vulnerable to Shane van Gisbergen on fresher tyres.

Scott McLaughlin and Jamie Whincup rounded out the podium at Hidden Valley while van Gisbergen was fourth, McLaughlin surviving a mid-race scare in an overheating Shell Ford.

With the results, McLaughlin extends his championship lead slightly over van Gisbergen to 161 points after 16 of the year’s 31 races, with Reynolds third, 327 adrift.

Reynolds moved from fourth to first at Turn 1, with an audacious move around the outside of front-row starters Rick Kelly and McLaughlin.

The Penrite Holden made light work of the opening phase, pulling away to lead Kelly by 1.6 seconds after 10 laps and 2.8s by the time he pitted for the first time on lap 18 of the 70.

There was little change to the margins following the first round of stops, after the lead group cleared Michael Caruso, who had pitted on lap six.

McLaughlin was right behind Kelly, but oil smoke started to flow from the rear of the Shell Ford approaching lap 30, with the driver informed he had “hot oil” by engineer Ludo Lacroix.

While seeking clean air down the straight for his Falcon, the championship leader had also lost the cool-air hose that fed into the top of his helmet.

At the halfway mark, Reynolds led Kelly by two seconds, with McLaughlin six tenths behind the Nissan and Whincup a further two seconds adrift.

The second round of stops started immediately afterwards as McLaughlin and Whincup both pitted on lap 36.

They jumped Kelly, who came in the next lap, but McLaughlin’s buffer over Whincup had gone and the Falcon was smoking more heavily on his outlap.

Reynolds completed the sequence of stops for the lead runners on consecutive laps on lap 38 - leaving 32 to go - and his advantage over McLaughlin had grown to five seconds.

The clean air appeared to help temperatures in the #17 Ford, which started to emit less smoke as McLaughlin settled into the stint.

Meanwhile, running an alternate strategy, van Gisbergen was one of the last drivers to pit for a second time, doing so on lap 46.

Van Gisbergen was seventh when he emerged, 26 seconds behind Reynolds, and then 16 adrift with with 20 laps remaining.

Those margins were negated with 16 laps to go by a Safety Car period, for debris on the front straight including part of the splitter from Lee Holdsworth’s Preston Hire Racing Commodore.

When racing resumed with 12 laps to go, van Gisbergen picked off Percat for fifth, but he encountered a resolute defence from Kelly.

It took the Red Bull Holden four laps to get past the Nissan, by which time he was nearly five seconds behind Reynolds, with eight left.

Reynolds was ultimately unchallenged, taking the win to complete a dual-podium weekend in Darwin after finishing third on Saturday. 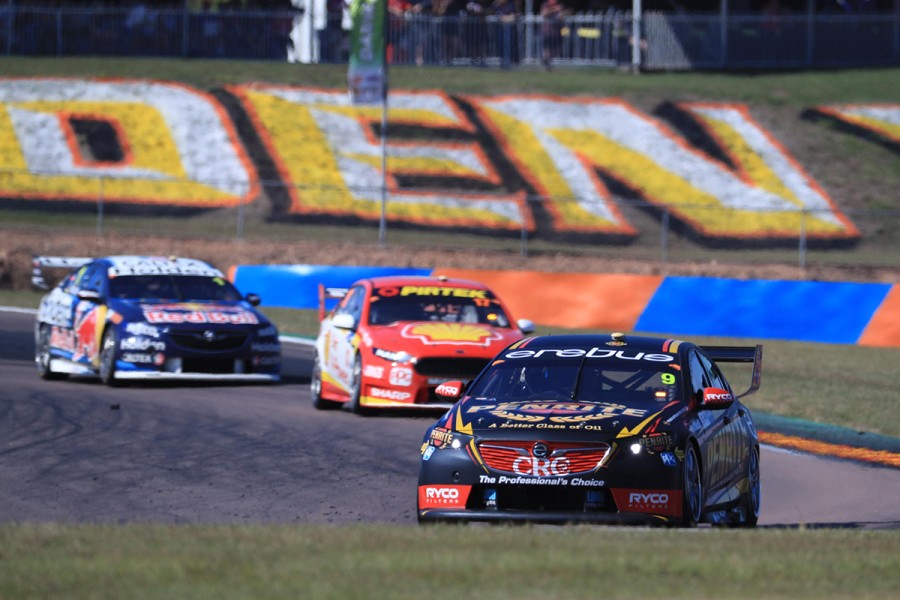 “I always try and get the best starts I can and I just hung my balls out at Turn 1 and went a bit deeper than everyone and it paid off,” he said.

“It really set up our race. We had awesome pitstops and good strategy. My car was amazing today, I couldn’t fault it.

“Darwin has been the best weekend for us for a long time. It’s just been magical, the whole weekend.”

“It was pretty hot going there. The engine was hot, I was hot, we had stuff going on everywhere,” McLaughlin said.

“The car was actually really good, we just couldn’t get close to people because of the heat of the engine.

“Then down the straight I was plucking sixth gear and just trying to get the [air] hose for as long as I could and get some helmet fan for a bit.

Third for Whincup is the seven-time champion’s first podium since the Symmons Plains event in April, while van Gisbergen had to settle for fourth.

“It’s certainly nice to be back on the podium. It’s been a little while,” Whincup said.

“We were schooled in the pits. We could have got another spot, my error, but the car was nicer than what it has been so I’m looking forward to what we can do from here on in.”

In ninth, Caruso completed a 40-lap final stint, while Lowndes had pitted on the same lap as van Gisbergen but lost time in traffic at the late restart.

Tickford’s best runner was Chaz Mostert in 12th, having survived a last-corner clash with Scott Pye during the final stint.

Pye had pitted one lap after van Gisbergen and Lowndes but sustained a puncture, pitted again and finished 20th.

Will Davison was the best of the drivers who made a third pitstop for tyres behind the Safety Car, and rose from 18th to 14th on the run home.

Reynolds’ team-mate Anton De Pasquale was the first rookie home in 15th, having made his first ARMOR ALL Top 10 Shootout earlier on Sunday to start 10th.

The next Virgin Australia Supercars Championship event is the Watpac Townsville 400 on July 6-8.