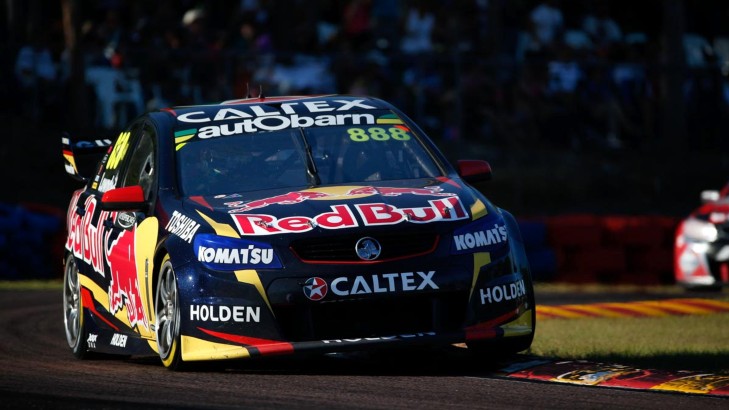 It's another Red Bull front row at the SKYCITY Triple Crown, but this time it's Craig Lowndes starting from p1.

Lowndes laid down the challenge and was out of the car after recording his 1min08.75 lap, watching on as others tried to topple him.

But while teammate Jamie Whincup got within 0.08sec, it wasn't enough as last year's Sunday winner is in the box seat for the challenging 200km race, scoring his first pole at Hidden Valley since 2000.

"I was a bit thankful to hang onto that pole position," Lowndes said after the session.

"A one-two again is fantastic."

Lowndes yesterday pegged back some points to Championship leader Mark Winterbottom - who qualified 10th for this afternoon's run - with the difference now just 65 points. Frosty is back in 10th position, so today is Lowndes' chance to pounce.

"We had to turn things around, Frosty was sort of skipping away," Lowndes said.

Ingall is the highest placed of those on the alternate strategy, having saved - or for some others, accumulated after incident - a new set of tyres from yesterday's races.

David Wall didn't participate in the session, with his Wilson Security Racing Falcon suffering from a power steering issue.