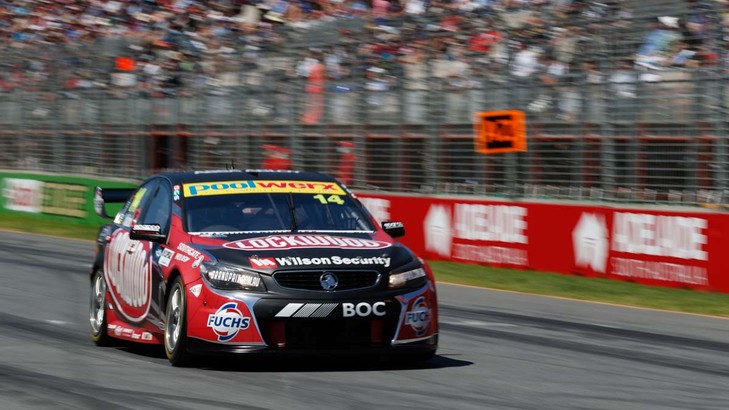 There’s plenty of focus on the Team BOC side of the Brad Jones Racing garage after Jason Bright’s spectacular accident at the Clipsal 500 Adelaide – meanwhile, Fabian Coulthard sits second in the Championship standings.

While the Kiwi driver is pleased with the points accumulated, he was perplexed at the lack of qualifying pace from his Lockwood Holden Commodore VF, leaving him to start from 10th, and 16th twice, for the three races.

“We weren’t outside the top five in any session – practice, races – and the three main things of qualifying I was outside the top 10 so it’s certainly an area of focus we need to look at,” Coulthard told v8spercars.com.au.

“We need to realise what’s going on, how come we couldn’t get a time out of the car…

“I just don’t feel like we generate the grip soon enough.

“On the first or second lap it takes too long to work the tyre to get the gain out of the new tyre. But I’m sure there’s other things on top of that, it’s not just that.”

“Last year qualifying was a strength, I was top three out of everybody throughout the year and just a little bit perplexed I guess as to why it’s all of a sudden not the same way as last year,” he said.

“We’ve got a very good race car, we proved that – to come away from (Clipsal) with two fifths and a fourth, second on points, if you’d said to me the other day with the qualifying position I’d gotten – I’d take that!

“It’s alright we did our thing, stuck to the plan, came home relatively good.

“We’re in a much better position this year than this time last year. We left (Clipsal) 23rd overall with no points, so to be leaving with a handful of points and second in the Championship, we’re definitely going in the right direction.

“It’s a known fact you have a good Clipsal it sets your year up. Like I said, we’ve got a good bag of points and will be trying our hardest to keep them and build on it in the coming rounds.”

Next cab off the ranks is the 2014 Formula One Rolex Australian Grand Prix – an event Coulthard managed to win three of four races at last year.

Top priority is sorting out the qualifying situation.

“Obviously format is going to be different, no standing starts, rolling starts, so anything to go by this weekend with the rolling restarts, it will provide plenty of action, I think we’ll see a fair bit of that."

Craig Lowndes leads the Championship points, 52 ahead of Coulthard, with Shane van Gisbegen, Rick Kelly and James Courtney in the top five.

Meanwhile, team boss Brad Jones has said he doubts chassis BJR001 – which Bright contested the 2013 Championship with – will ever be raced again.

The team will put a new chassis “into action” for the 2014 Formula One Rolex Australian Grand Prix.

Tickets are available for the four-day Melbourne event now.