Pye’s eyes on the prize 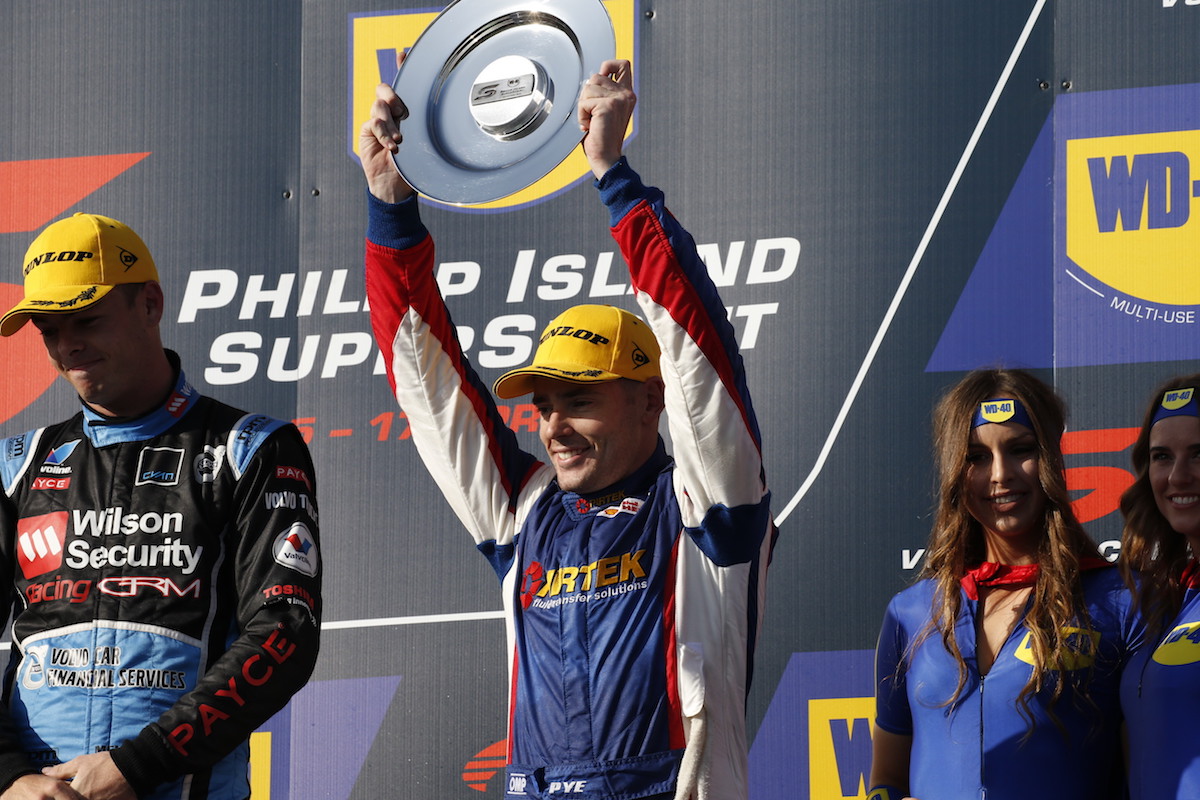 Confident in his own ability and that he has the backing of his crew and management, Scott Pye says he will rely on his results to guarantee him a drive at DJR Team Penske beyond 2016.

Speaking after finishing third in Sunday’s Race 7 of the championship at the WD-40 Phillip Island SuperSprint, Pye made it clear he had no interest in the media speculation suggesting out-of-contract Volvo star Scott McLaughlin was a chance to take his seat in 2017.

“I feel I have the support around me to move forward, focus on my racing and do the best job I can,” the 26-year old told v8supercars.com.

“I haven’t read a full article yet so it doesn’t affect me.

“The best thing I can do for my career is do the job in the car and not worry about the rest of it,” he added.

Pye has been dogged in his determination to stay in the championship since his torrid first main game season with Lucas Dumbrell Motorsport in 2013. He transferred to cash-strapped Dick Johnson Racing for 2014, but initially missed out on a 2015 drive when Marcos Ambrose signed with newly-formed DJR Team Penske.

Thrust into the driver’s seat when Ambrose dramatically pulled the plug after just two events, Pye looked to be on the outer again for 2016 until team owner Roger Penske’s unexpected decision post-Bathurst to expand to two Ford Falcon FG Xs one year ahead of schedule, offering the South Australian a one-year deal (with an option) alongside new recruit Fabian Coulthard.

Now, just three championship events into 2016, McLaughlin is being touted as his potential replacement for 2017.

“Usually I get at least four rounds into the championship before this comes up. Every single year I have been involved in this,” Pye said.

“I have kept it out of mind, this has been one of the best weekends I have had in a long time.

“The most disappointing thing is the way it affects the boys in the team because we are one big family,” he added. “They see it and I don’t think they appreciate it.

“You have people speculating and the media seems quite negative at times.”

Pye has been mentored for much of his career both here and overseas by Triple Eight team owner Roland Dane, but he has recently decided to manage himself, in much the same way as McLaughlin does.

“There was a number of reasons (for opting for self-management),” Pye said. “I don’t believe I have ever got in a position where I have been overly stable. That’s well known, it’s not a secret that every year I have been involved in this kind of thing.

“The good thing about that is at least I am used to it and it has made me fairly hard against it.”

Pye, who now sits 12th in the drivers’ championship, emphasised that both DJRTP managing director Ryan Story and Penske Racing president Tim Cindric had been clear in their expectations of him.

“I actually rang Tim to thank him and acknowledge that I appreciated Ryan coming to me,” Pye said. “Ryan was really honest with me and told me exactly what is happening.

“It is not a concern of mine because nothing has actually changed. It is just all this speculation that has come out in the media and there is nothing behind it.

“All I can do is the best job that I can. If it’s good enough they will employ me, if it’s not they won’t.”

Story told v8supercars.com last week that the team was giving Pye “the opportunity to repay that faith and do the job that we know he is capable of doing”.

Pye is a tough customer who has endured some incredible challenges in his career to achieve success. He broke a rib in a late-race accident at Bathurst last year but bounced back to score DJRTP’s first podium just two events later in New Zealand. He also scored the team’s first pole position in the opening race of the season at the Clipsal 500 this year.

Away from racing he has suffered the tragedy of losing his father to cancer in 2009. Pye has also fought back from a road car accident in 2003 in which he was severely injured.

“I have one job at hand and that is to focus on racing the car the best I can and building my relationship with the boys because I want to be here for a very long time,” he said.

“I feel my relationship with all of them is very solid and I couldn’t be happier. I keep saying I got my wish list. Everything I wanted last year I got this year; a fantastic team-mate and probably one of the best teams in pitlane with the best people.

“I don’t want to go anywhere; I am just focussed on working with those guys the best I can.”