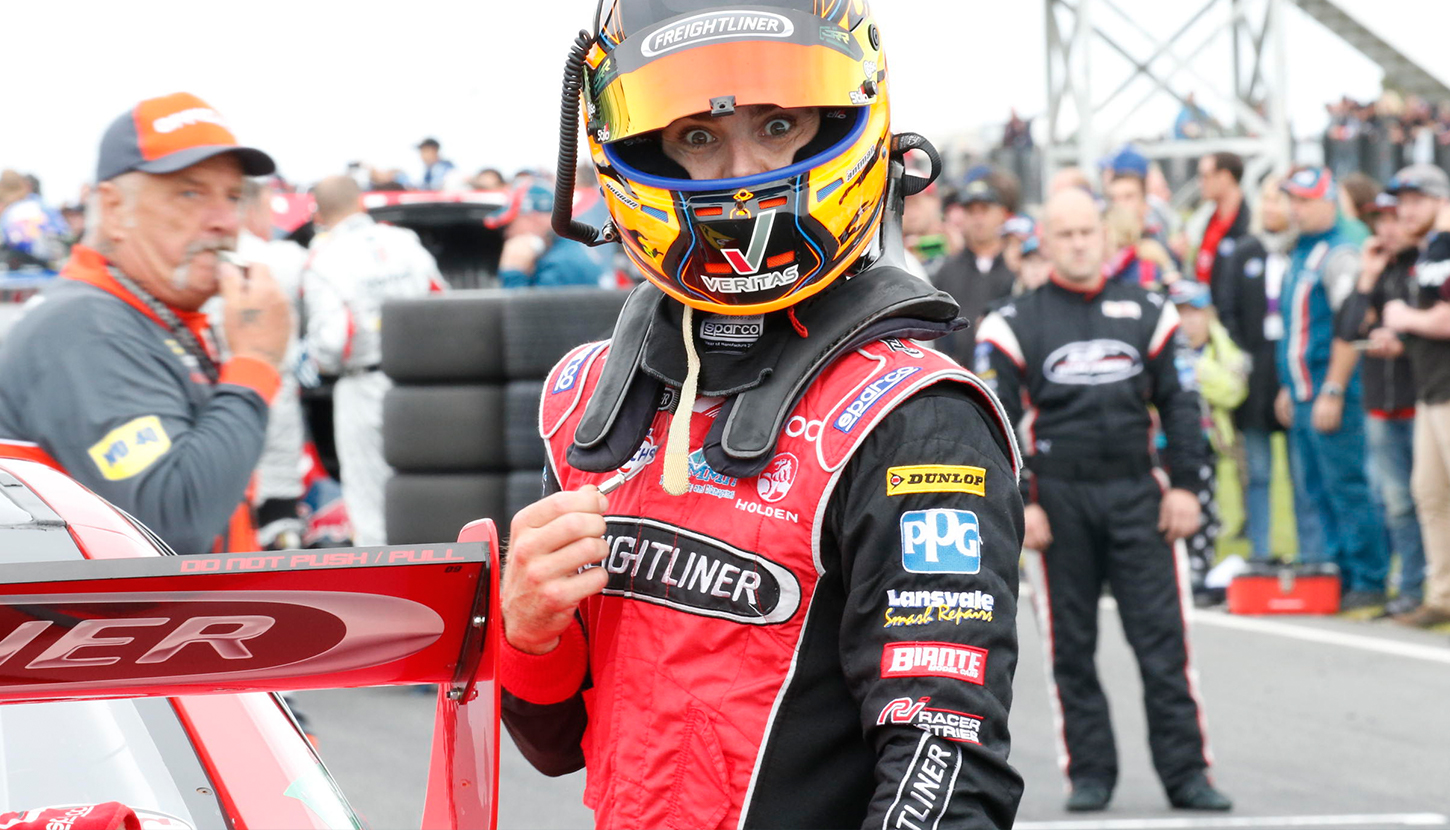 Breakthrough winner Tim Slade is invoking a traditional football coaches strategy as the Virgin Australia Supercars Championship looks forward to the Darwin Triple Crown, declaring he is taking the season ‘one weekend at a time’.

In his 227th Supercars start, the 30-year old Brad Jones Racing driver broke through for his first win in the 120km opening race of the Woodstock Winton SuperSprint and then backed it up with another victory on Sunday in the 200km mini-marathon.

With the Hidden Valley track having been resurfaced last year and that event also using soft tyres, the expectation is Slade will be a front-runner there when the championship reassembles for the June 18-20 SuperSprint outing.

“Darwin is something to look forward to but you don’t go into any race thinking that you are going to dominate the weekend or anything like that,” Slade told supercars.com.

“It sounds like a cliche but the idea is to take each weekend as it comes and the approach in Darwin will be no different from any other race.”

Slade was the ninth winner in 11 races in the championship so far this year, jumping from 11th to seventh on the points table after his clean sweep.

Slade celebrated his success with the team in an Albury pub last Sunday night, then debriefed on Monday. He played for the BJR indoor cricket team on Monday night, before heading back to the Gold Coast Tuesday for a few days before appearing on RPM yesterday.

“It’s been good to relax for a few days because it has been a pretty hectic period,” he said. “I have been overwhelmed by all the messages and the congratulations I have received.”

He said the closeness and unpredictability of the racing is an important reason he is hedging his bets for the trip north.

“It’s so hard to predict because the category is so competitive,” Slade said.

“Just because you won and had an awesome weekend at Winton you don’t go into the next race thinking you are going to clean sweep that.

“Obviously a lot of hard work and knowledge goes into it, but sometimes there is a bit of a luck element as well. I think everything just worked in our favour at Winton and we nailed it.”

Slade took over the Freightliner entry from Fabian Coulthard for 2016 after the New Zealander moved on to DJR Team Penske. He wasn’t surprised by Slade’s Winton success and is also predicting he will go well in Darwin.

“After driving that car and knowing what it is like on high grip surfaces and soft tyres I said to the boys at BJR ‘if you are going to have any success it is going to be here (Winton) and Darwin',” Coulthard said.

“But having a fast car is one thing, you still have to steer it and Tim has done a great job.”

Coulthard has shown strong pace in the past in BJR Commodores at Hidden Valley, scoring a third in the 200km race last year and in one of the Saturday sprints in 2014.

Slade has also had decent recent form there, scoring a second last year in a 60km Saturday sprint in his Walkinshaw Racing/Supercheap Auto Racing Commodore.

“One positive thing is that heading into the next round is it is at Darwin and Fabs had some really good speed there last year,” Slade said.

“Traditionally the BJR cars go quite well on the high-grip new-surfaces and that was resurfaced for last year, so that does give me a little more confidence heading there rather than a Sandown for argument's sake.”

After the Sunday race win Slade reflected on the experience.

“It's true what they say, once you get the first one out of the way the second one is definitely easier.

“I guess the first one there is that element of doubt in your mind because you haven’t done it before. But the second one, your brain is a lot clearer.

“I was fortunate that I had a really speedy car and was able to control it to a certain extent and manage the gap.

“Once I started to get close to home I started to think about burn-outs and things like that and I had to pull my head in and worry about keeping the thing on the track and getting to to the finish line.”

Slade and his BJR team-mates Jason Bright and Tim Blanchard will test at Winton before the Triple Crown. An important target of the test will be improving qualifying pace. Up until Winton, where he qualified 1-4, Slade had yet to start a 2016 race from inside the top 10.