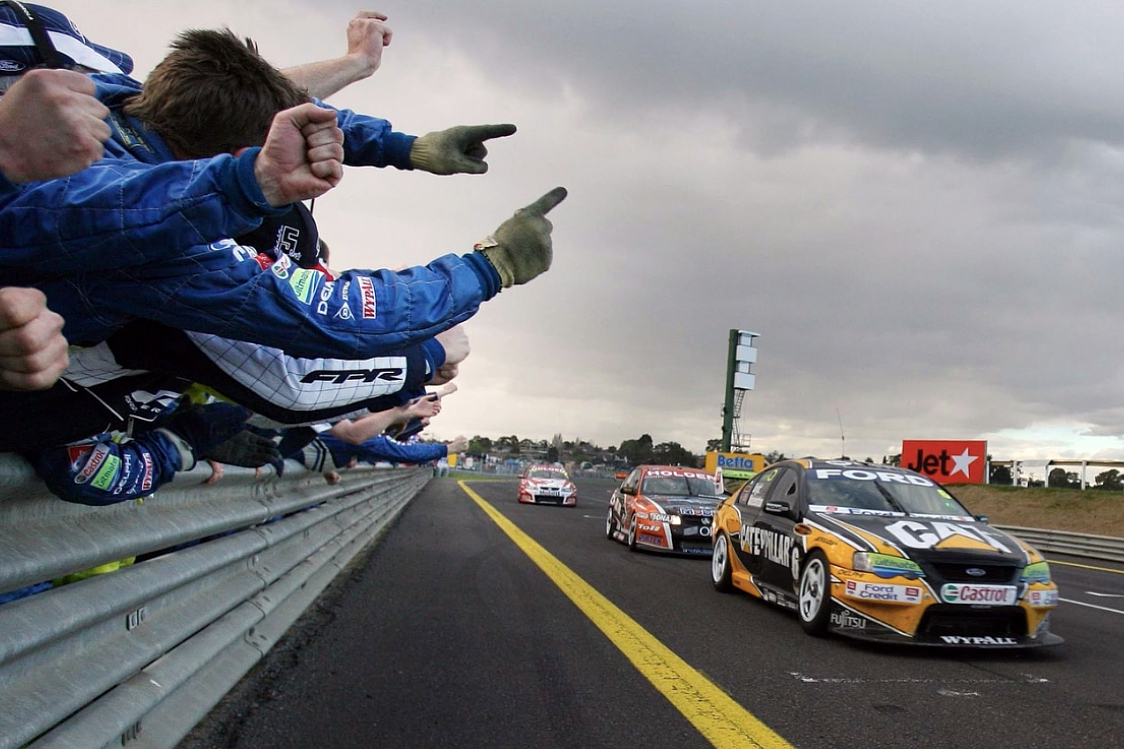 It’s hard to believe 15 years have passed since the dramatic 2006 season, which ended with a drivers’ title for Rick Kelly.

The 2006 season was also a breakout year for Mark Winterbottom, who claimed wins at Sandown and Phillip Island to finish third overall.

On September 3, 2006, Winterbottom combined with Jason Bright to claim a remarkable Sandown 500 victory.

The team’s previous win, courtesy of Craig Lowndes at a sodden Phillip Island, came in a year Winterbottom won the development series in a canter.

Formative seasons with Mark Larkham’s outfit didn’t reap strong results for Winterbottom, and the drive with FPR for 2006 was too good an opportunity to refuse.

An outright podium at Pukekohe aided Winterbottom’s charge, but Bright firmed as the team’s lead man in 2006.

To Sandown, and Lowndes and Kelly were the two title combatants. Bright had won races at Winton and Darwin, and Winterbottom had been knocking on the door with 13 top 10 finishes from 20 starts.

Full-time drivers were paired together for the enduros; Winterbottom with Bright, Jamie Whincup with Lowndes.

Skaife and Tander loomed to run away with the Sandown win; Tander smashed allcomers on Saturday, beating Lowndes to pole by over 0.7s.

Come race day, and it unravelled for the #2 HRT entry from lights-out. Tander had a poor start and was swamped by Whincup, Max Wilson and Winterbottom. 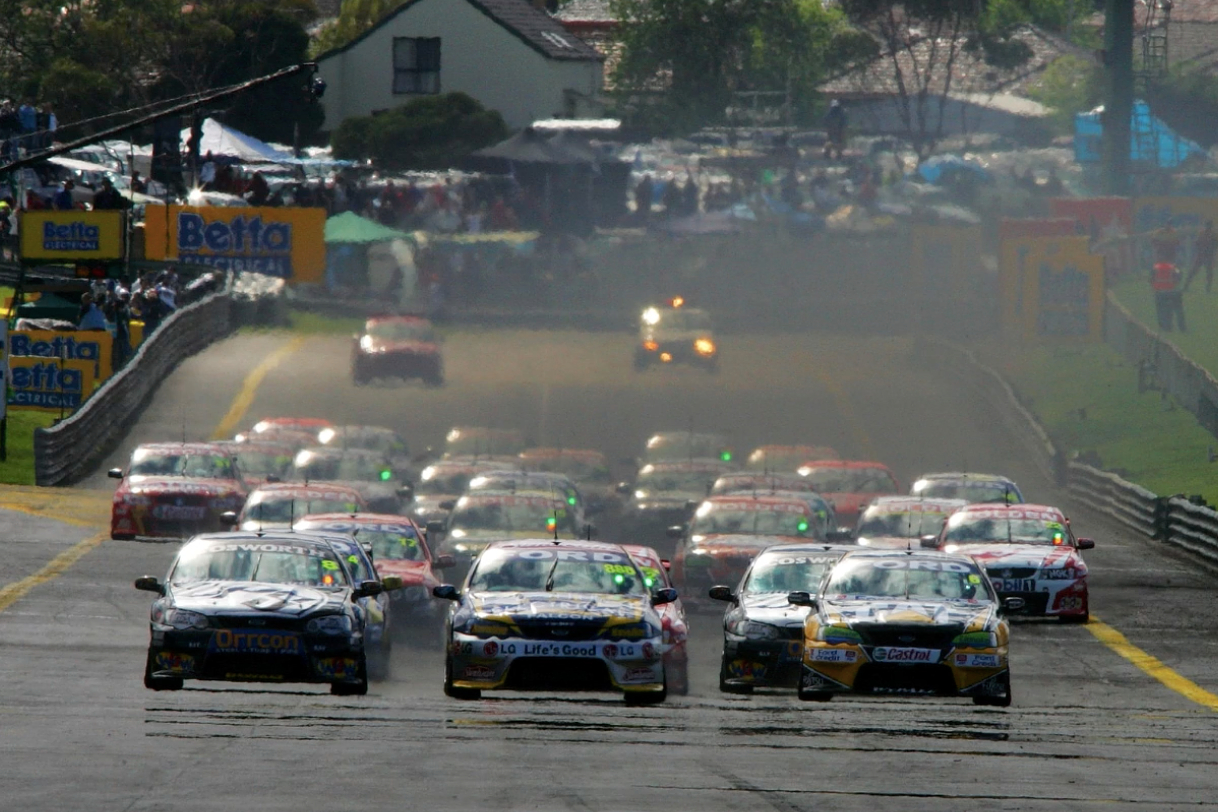 Whincup, the Adelaide 500 winner, gapped the field as Wilson led a train of cars behind.

Tander cleared Wilson on lap 7, and proceeded to hunt down and overtake Whincup out of Turn 1. From there, Tander set the fastest lap several times and bolted to a lead.

Triple Eight stopped the #888 under green conditions and Lowndes, who had taken over from Whincup, dropped a lap.

After two third's race distance, Skaife took control of the #2 - but to everyone’s shock, he went straight on at Turn 4 after green racing resumed following a Safety Car period.

Skaife was forced into the garage with steering damage; the #2’s race win hopes were dashed, and Tander’s spirited title bid was ruined.

With two key runners out of contention, Kelly and Bright emerged as the two drivers with the greatest chances of victory. Behind them, Brad Jones was in third, 12 seconds from the race lead. 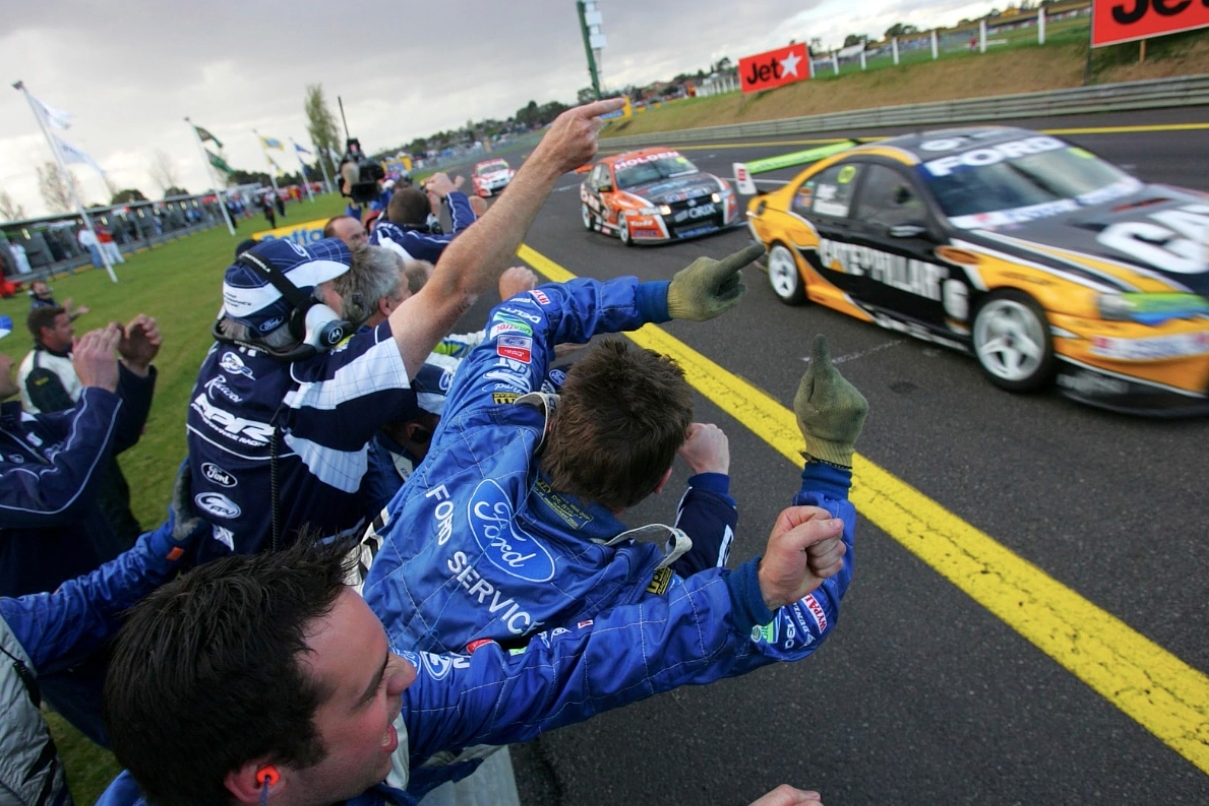 Light precipitation threw a spanner in the works with 30 laps remaining.

On lap 138, Bright cleared Kelly for the lead at the back of the circuit. Two laps later, Lowndes caught and passed Jones at Turn 1.

Incredibly, Lowndes had made up the time lost earlier in the race, and was just 11 seconds from the lead.

Lowndes was lapping three-tenths quicker than the leaders, but was fighting through traffic. Bright had fought to build a margin, but Kelly kept a watching brief.

With nine laps remaining, Bright’s lead hovered at a second over Kelly. The 23-year-old Kelly, wearing an open-faced helmet, pushed the #15 Commodore to the edge as he eyed his first win of the season.

With four laps to go, there was no talk of margins - Bright’s mirrors were full of nothing but the orange and black of Kelly’s car. 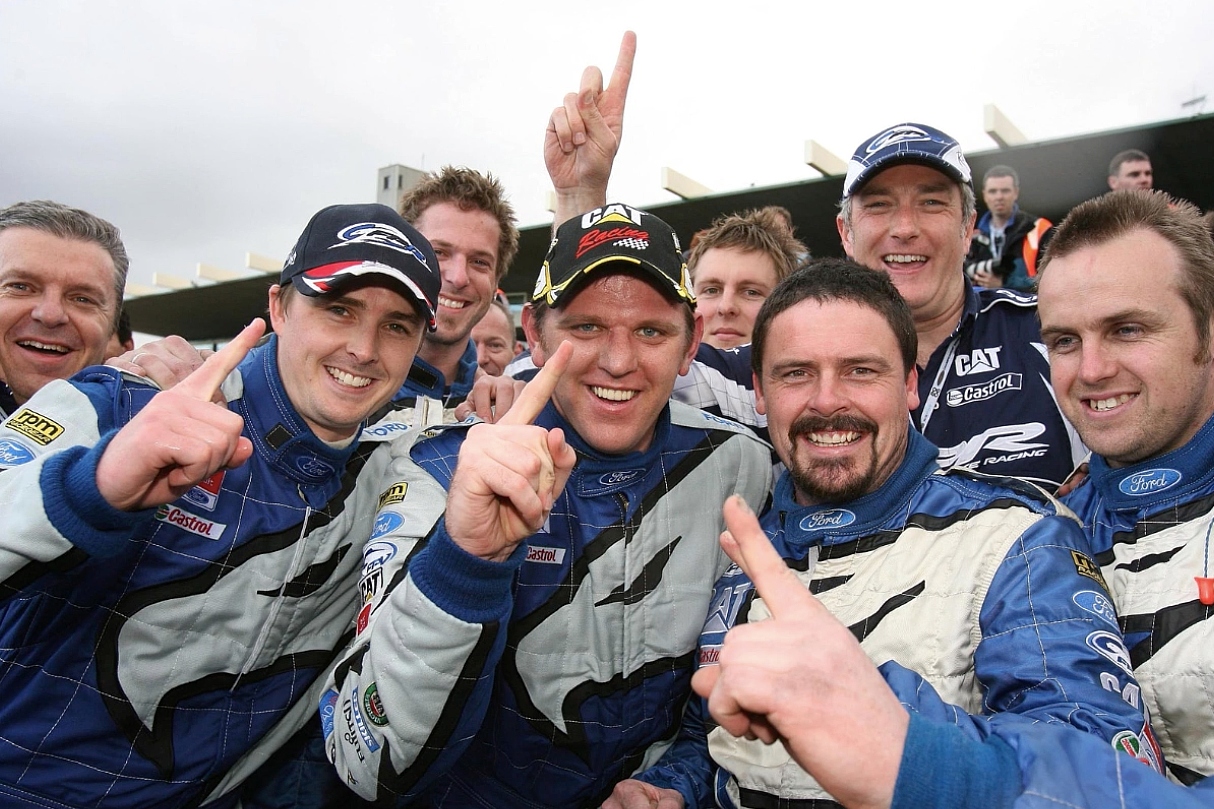 On lap 159, the two dragged down Sandown’s long pit and back straights, the grandstand on its feet as the leaders battled with the win on the line.

Bright made his Falcon as wide as possible, and squirrelled around the circuit’s edge, trying to keep a rampaging Kelly at bay.

It was FPR's first round victory in the championship since Phillip Island in 2003, but easily its most important.

Bathurst podiums in 2003 and 2004 were glimpses of what the team had to offer, but wins were the most important currency.

It was Bright’s first Sandown win, nine years after a debut podium alongside 1980 Formula One champion Alan Jones. 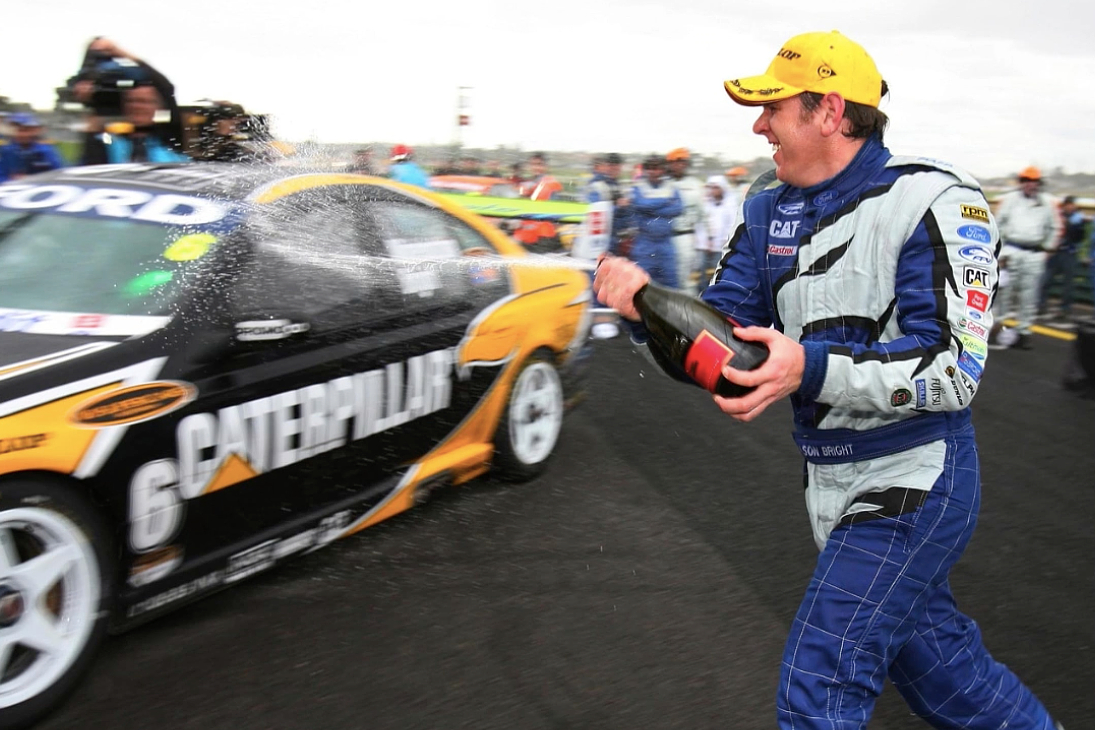 Winterbottom’s move to the team had proved its weight in gold, the then 25-year-old fist-pumping on the pit wall as he celebrated his first career win.

"It was a long time coming, I've said for a while now I would give up a bit of the bad luck to win one of these two," Bright said.

"We came into this year with the wrong kind of bang in Adelaide and we've been on the pace since then.

"There were a few rounds that I considered to have slipped away from us this year.

"Mark is having a great year in the championship and we knew we would be a strong combination here."

Winterbottom would remain with the Ford team until 2018, and claimed a Bathurst win in 2013, and a drivers’ title in 2015 - a season which featured another Sandown win. 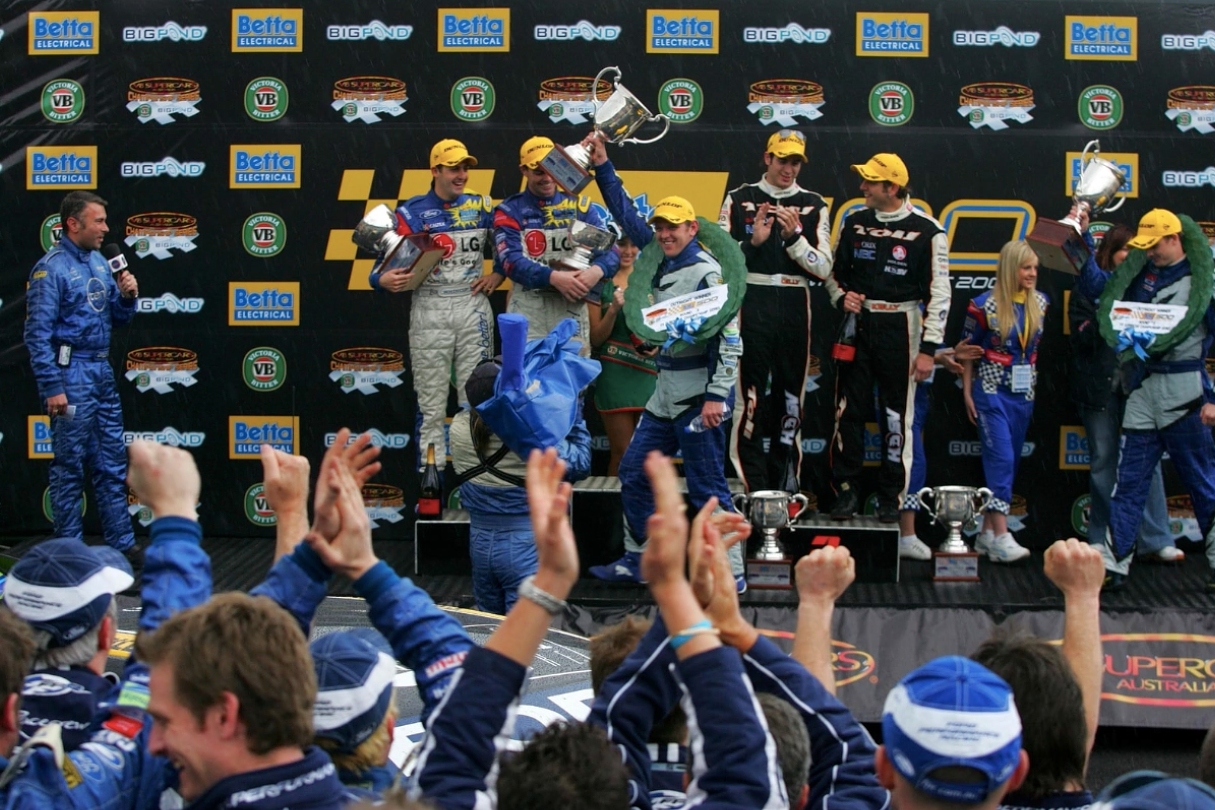 "Last year I was battling for survival to turn up at Indy and this year I win the race. I've had two podiums this year, it's been awesome.

"It was really good to get away with this one and now it's off to the mountain."

For Kelly, falling short meant disappointment - but being able to challenge with brother Todd at the first attempt was pleasing ahead of Bathurst.

"I was a little disappointed, as we have been sitting around in or around the top three for most of the year and haven't cracked it for a win," he said.

"When Brighty got by me I had been playing around with the brake bias to try to protect the rears [tyres], and I just caught one [front tyre] on that corner and Brighty jumped past me. 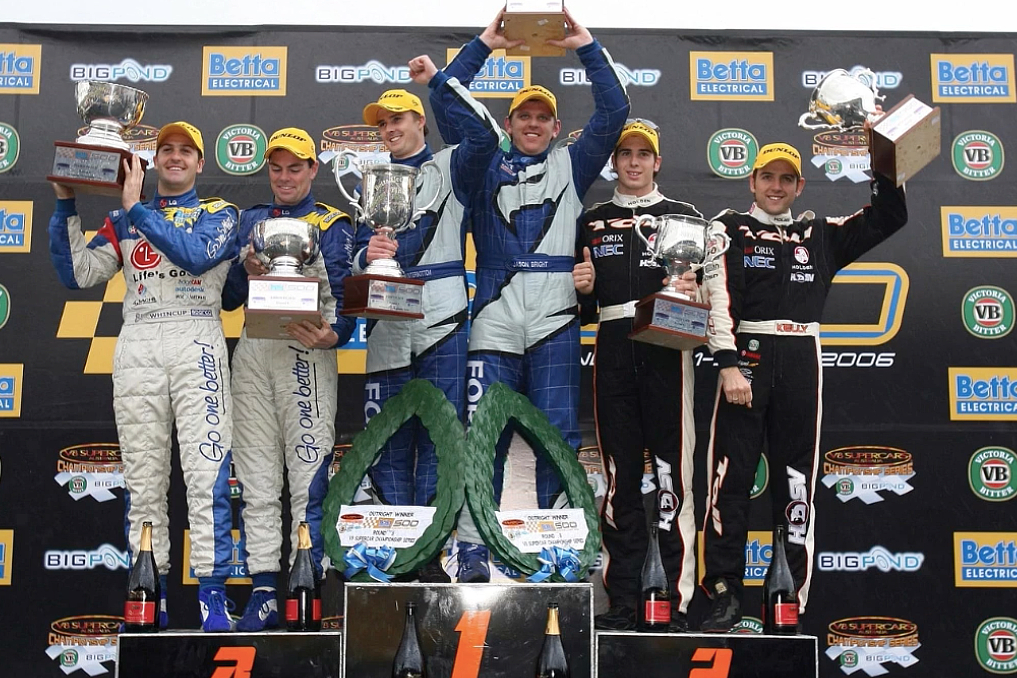 "It was a great move by him - a little bit aggressive - and I didn't want to fight him too much for it, and in the end I couldn't do the same to him.

"Todd has done a lot of the car set up over the weekend, and he has really helped us out. I was a little bit worried coming into this round, never having driven with Todd in a race team.

"I thought we might lose focus and muck about all weekend, but it has been really good. So we head to Bathurst with a lot of confidence and ready to have a red hot go at it."

Lowndes was unable to repeat his 2005 win alongside Frenchman Yvan Muller, but was pleased with the fightback after losing a lap.

"It's really pleasing to finish on the podium today considering the situation we were in after the first pit stop," Lowndes said.

"We went down a lap and the boys told me to just push on to try to work on the gap. 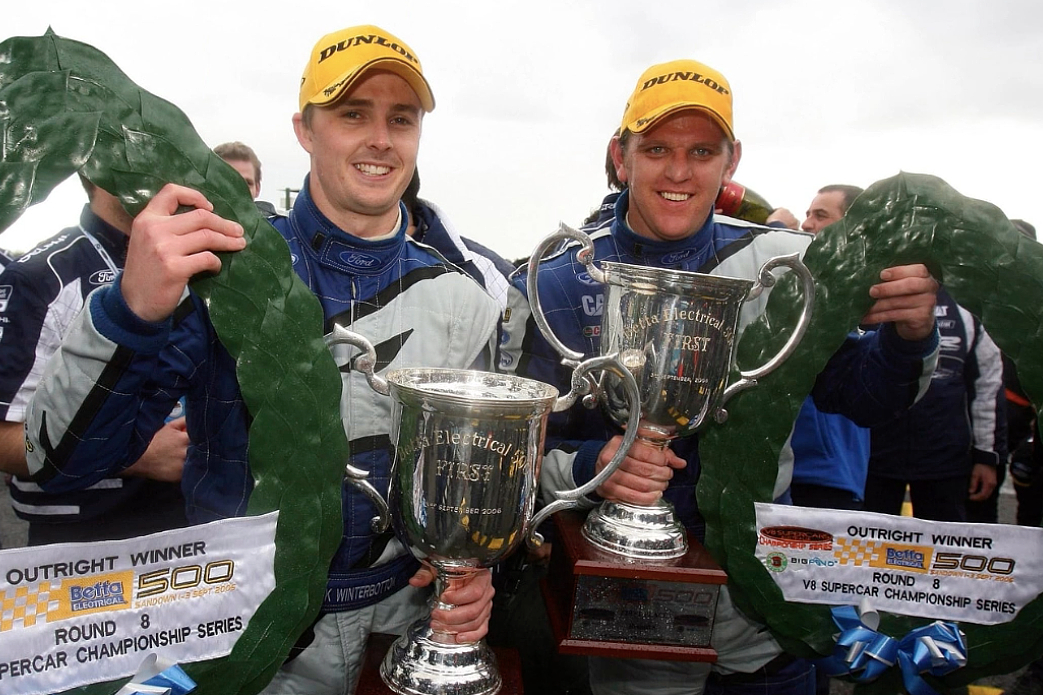 "The car had good pace and was well balanced in the middle stage which allowed me to make up quite a bit of ground, and a Safety Car period, which had worked against us at the start of the race, then worked back in our favour.

"It became quite hard to pass on the lead lap, the top cars were separated by a number of backmarkers and I was becoming quite frustrated in my attempts to pass some of them."

Later that week, Australian motorsport was rocked by the sudden passing of Peter Brock.

Lowndes arrived in Bathurst with a point to prove, and for the second race running, Kelly was pipped to the post.

Bright and Winterbottom were the early pace-setters at Mount Panorama, but an engine drama ended their hopes.

The symmetry to Sandown continued; Skaife and Tander launched from pole, but a slipping clutch saw Skaife drop down the field off the line.

He was infamously struck by the unsighted Jack Perkins, and for the second enduro in a row, HRT went home empty-handed.