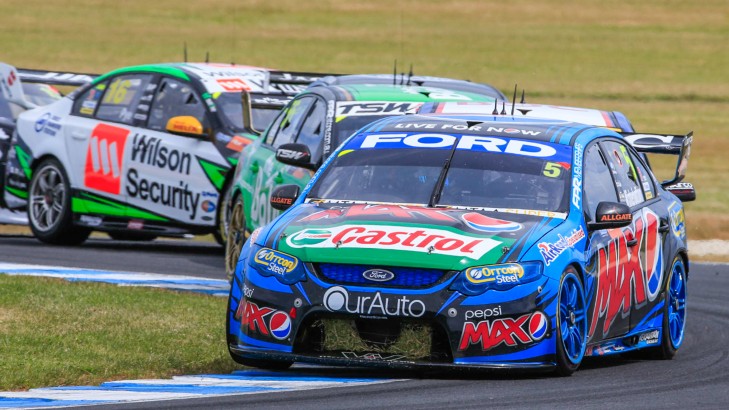 Ford Australia has confirmed it is pulling out of V8 Supercar racing from the end of the 2015 season.

It will have a reduced commercial arrangement next season with the team currently known as Ford Performance Racing (FPR), but will cease all involvement beyond that.

The blue oval advised stakeholders of its withdrawal from Australia's number one motor racing category at 3pm today. It did not issue a public statement.

The withdrawal is indefinite and has been sheeted home to the company's desire to allocate its limited marketing funds to its expanding product lineup and an improved customer experience.

Ford will shut its Australian manufacturing plants no later than October 2016 and kill off the Falcon, which was launched last week in farewell FG X spec.

FPR has been in negotiation with Ford over a renewal for months. FPR drivers Mark Winterbottom and Chaz Mostert will still race FG X Falcons in 2015, as will Marcos Ambrose for the new DJR Team Penske entity.

In an exclusive interview with motoring.com.au, Ford Australia marketing chief David Katic said: "We are very aware of what some people will think but all I ask is that people understand this is not about cost saving, this is about investing in areas that we think consumers will value as well.

"We have tangible proof of those investments; it's not just saving money and that's it. It's new products, customer experience etcetera.

"We understand the passion but we think we need to make some of these difficult decisions - and they are difficult."

Katic played down any chance the 2017 Gen2 regulations - that will allow engines other than V8s and bodyshapes other than sedans into the category - would tempt Ford to return soon.

Ford has been an integral part of the history of Australian touring car and V8 Supercars racing, winning 23 drivers' championships across the two categories, the last via James Courtney and Dick Johnson racing in 2010.

It has also won the Bathurst 500/1000 19 times, including the last two years in succession via FPR.

But Ford has progressively wound back its involvement in the category over the last few years; DJR was dropped, Stone Brothers morphed into Erebus and FPR become the sole conduit for factory money.

Holden has gone through a similar culling process and now backs only the Holden Racing Team and Red Bull Racing. It signed new two years deals with both those operations this year.

While Holden has been a continuous presence in racing, Ford's commitment has waxed and waned over the years; sometimes withdrawing totally, sometimes providing support through the back door and sometimes being a fully committed factory presence.