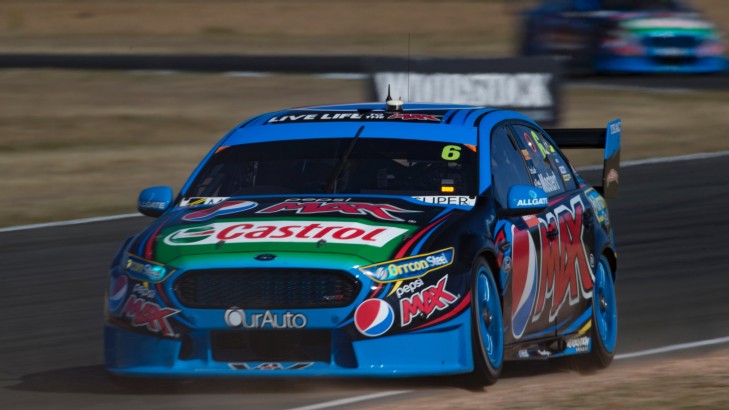 Chaz Mostert has been the form qualifier at the SuperSprint events, but needs to ensure a good jump off the line if he's to beat a competitive V8 Supercars field at the Coates Hire Ipswich SuperSprint.

The 23-year old Pepsi Max driver has earned six ARMOR ALL Pole Positions already this season and appeared to be on his way to more tomorrow after topping the times and beating Supercheap Auto's Tim Slade and Wilson Security GRM's Scott McLaughlin this afternoon.

However, from those starts he has only converted one to a race victory, being convincingly beaten off the line by teammate Mark Winterbottom on a number of occasions.

"If I can get off the line that'd probably be a good start - it's been no secret that's probably been my downfall the last couple of rounds has been starts," Mostert said.

"I've been trying really hard to work on that, look at the data and see what's going on there.

"We've just got to get off the line. We get off the line after a good qualifying position, half the job's there. But when you fall back a few positions you've got to race through and get back to the front."

While Sunday's 200km race is longer and involves strategy with pit stops and managing both compounds of tyre, the 60km races are an outright dash to the line and can prove quite difficult to pass.

"You can get some moves done on the softs, but on the hards it's pretty tricky.

"If we qualifying well again this weekend, the main focus is starts. Get starts and we get championship points, and we'll be alright."

"You can never count those guys out, those guys [at] the last couple of rounds have outdone me, so they'll be there tomorrow.

"We're all looking at each other's data tonight trying to make a 'super car' out of all three kits that we've got and have three competitive cars tomorrow - four, with Andre [Heimgartner, Super Black Racing]."

Queensland Raceway is notorious for it's changing conditions, and it was no different for the V8 Supercars field today.

"This track's probably one of the hardest to read and when the temperature comes up it's - the tyres just go away," Mostert said.

"I'm not sure if it's agreeing more with the soft tyre or the hard tyre, either way, but our car's been pretty good over both compounds today.

"We'll just keep focusing on ourselves, keep trying to tune it up make it as quick as we can and if it's enough to hold off, we'll stay at the pointy end."

Mostert sits fifth in the Championship standings, with Reynolds fourth and Winterbottom leading.

The V8 Supercars have a final practice session tomorrow at the Coates Hire Ipswich SuperSprint, with back-to-back qualifying and two 60km races to follow.

Courtney 'kicking himself' over lost points

Fords must unite in Championship fight