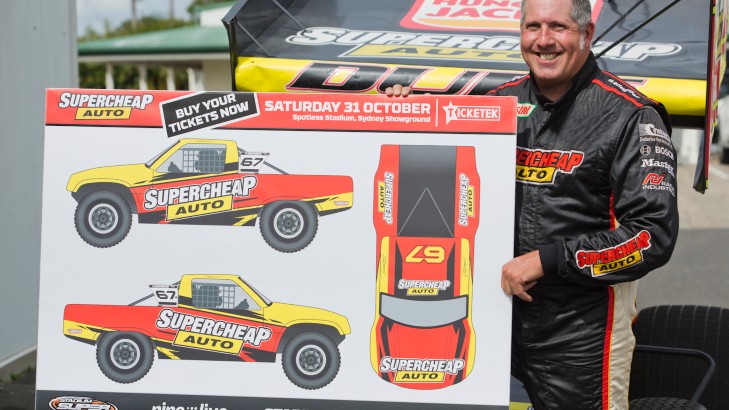 Reigning Supercheap Auto Bathurst 1000 champion Paul 'The Dude' Morris has been signed to compete in the two-round Stadium Super Truck series, kicking off at the Castrol Gold Coast 600 in October.

Morris has been one of the most controversial drivers in Australian motorsport during his 30-year career and his "take no prisoners" attitude will be perfect for the first true Stadium Super Trucks stadium event outside of North America.

The brainchild of former IndyCar, NASCAR and off-road legend Robby Gordon, the Stadium Super Trucks were a crowd favourite when they debuted at the Clipsal 500 earlier this year.

Morris is regarded as a true 'racer's racer' and has driven everything from championship winning 2-litre BMWs and Bathurst-winning V8 Supercars to 900-horsepower dirt track Sprintcars.

His current Sprintcar sponsor, Supercheap Auto, will also be the naming rights sponsor of his entry in the Stadium Super Trucks series.

"I have been itching to get into one of Robby Gordon's trucks since I first saw them a couple of years ago and now I will get my chance," said Morris.

"The Stadium Super Trucks were a massive hit in Adelaide earlier this year and I think the fans are going to be in for one hell of a show at Spotless Stadium in Sydney.

"With the Castrol Gold Coast 600 event the week earlier, the two-round series is going to produce some serious racing, especially in stadium spec.

"It is going to be a classic USA versus Australia battle and we will be playing for keeps."

The seriously-competitive Australian series will include 10 trucks from Robby Gordon's Charlotte-based stable which are set to be driven by a mixture of US and Australian drivers, who will continue to be confirmed in the coming weeks.

"Paul Morris is one of the best racers Australia has produced and he has proven he can drive just about anything," Gordon said.

"He will be great in a Stadium Super Truck and although it normally takes any driver a little time to dial in, I have no doubt he will be very competitive. Having the reigning Bathurst champion in the show proves how big this is going to be.

"I'm pumped to have a guy of his calibre as part of the series. It seems the Australian fans have a love-hate relationship with Paul but I'm sure they will be cheering for him against the drivers from the U.S. in October."

The second event in the series will be a stadium event at the Spotless Stadium, Sydney Showground on Saturday, October 31.

"His [Morris'] Sprintcar experience will come in handy on dirt at Spotless Stadium and his skill will take care of the rest," Gordon said.

"While the Australian fans have seen how spectacular our trucks can be on the ramps on a street track, they are in for a special treat with our stand alone stadium event at Spotless Stadium. It's going to be crazy."

Supercheap Auto Marketing Manager Dave Bauer said the appearance of the Morris in the Stadium Super Truck event in Sydney will cap off a massive month of motorsport for his company.

"Supercheap Auto has been a part a proud stakeholder in Australian motorsport for more than 20 years and our involvement with Paul (Morris) and the Stadium Super Truck events is another extension of that," said Bauer.

"There is not going to be much time for sleep in October with the Supercheap Auto Bathurst 1000, The Castrol Gold Coast 600 two weeks later and then the Stadium Super Trucks event the following Saturday night in Sydney. The three events are going to over such an amazing variety of entertainment and we cannot wait."

The Stadium Super Trucks are purpose-built machines with 600 horsepower that are capable of reaching speeds in excess of 200kph.

Even more impressive is their unique suspension, which allows them to jump almost 10 metres in the air and much further than that in distance.

The Stadium Super Trucks will also be supported by a range of action sports activity that will allow local riders and drivers the chance to perform on the world stage.

Tickets to the opening Castrol Gold Coast 600 are available here.