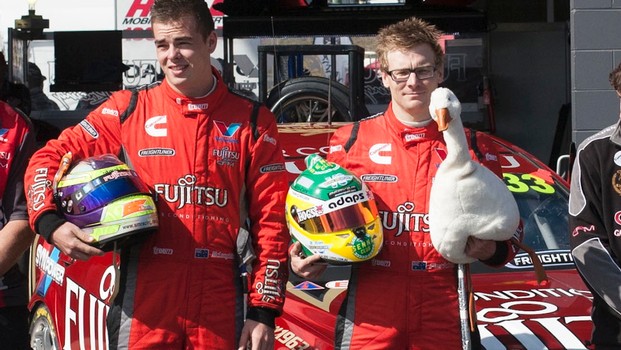 Rookie McLaughlin knows what it takes to perform in V8 Supercars, having notched up two Championship race wins so far this season, and believes Perkins has the talent to match the best of them.

“Jack’s been unbelievable to work with and deserves a seat,” he told v8supercars.com.au, unprompted.

“He’s one of the fastest, so I’ll put the advertisement out there for him.”

And, while Perkins has not spoken to team boss Garry Rogers about 2014, it has been announced the second seat alongside McLaughlin is available next year, when the team transforms into Volvo. Alex Premat is still be in the running to retain his role as driver of #34.

Rogers is a fan of 27-year old Perkins after his exploits with the team – he contested the enduros with Premat last year to finish 16th at Bathurst.

Son of Bathurst great Larry Perkins, Perkins Junior is no stranger to V8 Supercars fans, but is trying to reinvent himself after drifting between the main and development series.

He has been in the main series as both a full-time driver and co-driver over the years, having first competed with Jack Daniel’s Racing back in 2007. Many will remember his first lap collision with Mark Skaife at Bathurst that year.

Running fourth in the Dunlop Series and having earned three race wins in the category this season, Perkins said he was “absolutely” speaking to teams about a drive and knows a solid showing across the PIRTEK Enduro Cup is a key factor.

“And I ain’t sitting at home doing nothing while the other guys are racing solo driver rounds because I’ve got something better to do.

“I’d love to be full-time and hopefully a good result at the Gold Coast puts me ahead of a few others.”

A lot of interest surrounded the #33 at the Supercheap Auto Bathurst 1000, and Perkins believes the sport needs up-and-comers younger fans can relate to.

“A lot of people are interested in the newbies,” he said. “Scott’s had a breakout year and unfortunately everybody gets sick of the same people winning.

“We would have been a massive upset had we been able to get on the podium – I think that’s what the sport needs. (There’s) A lot of young people supporting us and we’re really grateful for their support.

“We’re really hopeful we can get on the podium at the Gold Coast.”

While a handful of co-drivers – and main series drivers, including McLaughlin – have not competed at upcoming event the ARMOR ALL Gold Coast 600 in a V8 Supercar, Perkins is one who has, and scored one of his career best results at the street circuit running with Russell Ingall in 2010 and finishing 12th and eighth across the two races.

Perkins is confident he and McLaughlin can finish higher than their Bathurst effort of eighth, at Surfers Paradise.

While co-drivers are still present for the final of the three endurance races, there are some changes, as the 600km is split over two races on Saturday and Sunday, using the Dunlop soft compound tyre. This is the first time co-drivers will race on the soft tyre.

Tickets are available for the ARMOR ALL Gold Coast 600 – and the event can also be followed on Channel Seven or V8 SuperView.