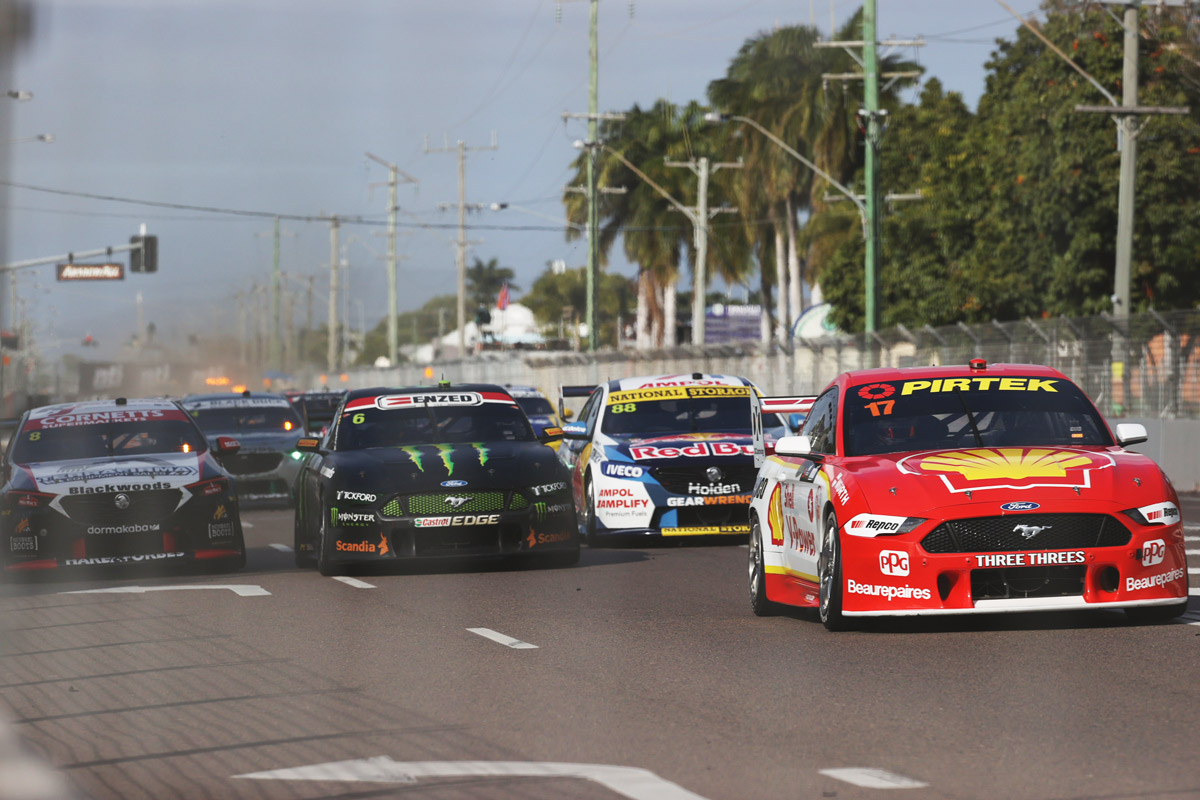 Scott McLaughlin ended a difficult NTI Townsville SuperSprint on a high note, fending off a determined Cameron Waters to win the final race of the weekend.

Starting from pole in the finale, McLaughlin’s win looks straightforward on paper, effectively leading the whole race to take the flag 4.2s clear.

However, it was a hard-fought win, with Waters piling on the pressure for the majority of the 39 laps.

“It was an awesome battle with Cam, he was fast,” said McLaughlin, who now has a 123-point championship lead over Jamie Whincup.

“I’m proud of everyone at Shell V-Power Racing for continually working hard and to get a win on a tough weekend is a great thing.”

Added Waters: “I gave Scotty everything I had then and couldn’t get him to make a mistake, so second was all we could do.

“But there’s a lot of pace in this car and we had a really, really good weekend. I’m absolutely pumped.”

McLaughlin had held the lead off the start, while Waters was slow away from second and fortunate only to drop one place to Nick Percat.

Waters made it back to second with an inside pass on Percat at Turn 2 the next time by, before focusing his attention on McLaughlin.

The Monster Mustang stalked the Shell V-Power entry, with the gap stretching only slightly to 1.3 seconds by the time the key runners made their pitstops.

McLaughlin emerged with the gap to Waters unchanged, but the Tickford driver immediately ramped up the pressure, closing onto the championship leader’s bumper.

Whincup meanwhile had held his fourth-place grid slot off the start and elected to run long, eventually stopping on lap 25 and taking two tyres to emerge narrowly ahead of Percat.

The Red Bull HRT driver though faced a 10s deficit to the front-runners and while he closed in on Waters, there’d be no late heroics.

McLaughlin eased away in the closing stages to take the win, while Waters had just 1.8s over Whincup, with Brad Jones Racing pair Percat and Todd Hazelwood fourth and fifth.

Scott Pye was the big improver, turning 15th on the grid into sixth, while Team 18 stablemate Mark Winterbottom was 10th – after a possible top six escaped due to a slow pitstop.

Shane van Gisbergen was never a factor from 13th on the grid and finished eighth, losing further ground in the championship.

Fabian Coulthard had a shocker, dropping from his 16th place grid slot to last off the start, before running the longest first stint of all and recovering to just 17th.

Chaz Mostert was the hard luck story, having been forced to pit to replace a deflated right-rear tyre just a lap after his mid-race pitstop.

The Walkinshaw Andretti United driver, who finished on the podium in the weekend’s opening two races, had run inside the top 10 before that point, and finished last.

Mostert remains third in the championship, now 384 down on McLaughlin, while Waters and van Gisbergen are tied for fourth, 399 adrift.