Scott McLaughlin has withstood a stern challenge from Jamie Whincup to win the second leg of the ITM Auckland SuperSprint and extend his Supercars Championship lead.

The Shell V-Power Racing driver jumped Whincup at the final pitstops, as strategies played out, and kept him at bay on the run home.

He duly took an eighth win of the campaign, and a first since the Queensland Raceway event in July.

Second ultimately went to Shane van Gisbergen, though, after Whincup slowed on the final lap of Pukekohe.

Van Gisbergen passed the sister Red Bull Holden within sight of the flag from 10 seconds behind to take second place, with Whincup third. 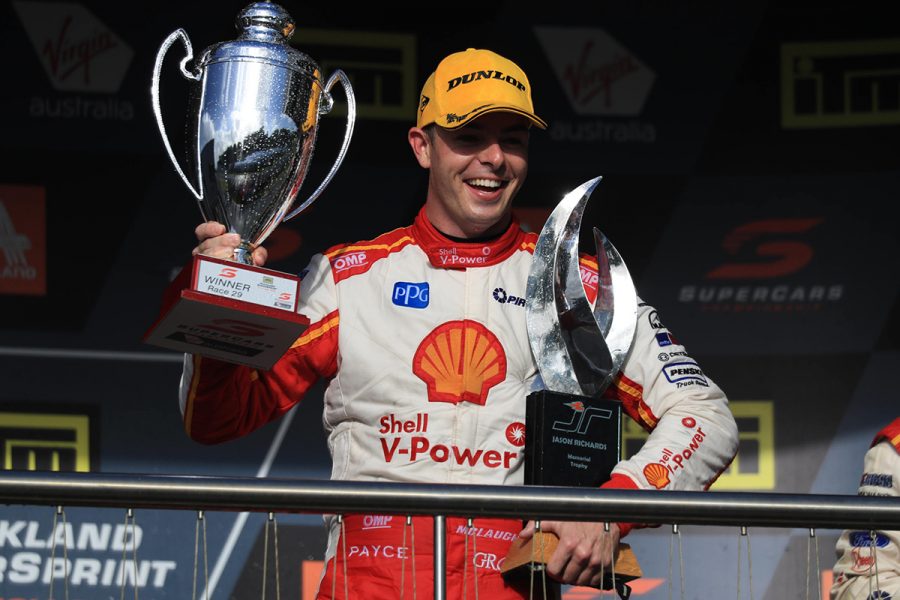 With the results, Scott McLaughlin wins then Jason Richards Trophy for the weekend's results, Sunday's win the tiebreaker over van Gisbergen.

The championship will be decided at the Coates Hire Newcastle 500 on November 23-25, an event McLaughlin starts with a 14-point lead over van Gisbergen.

He added of the JR Trophy: "That’s pretty awesome, I thought Shane may have got me there. But for a Kiwi to win it again is very special." 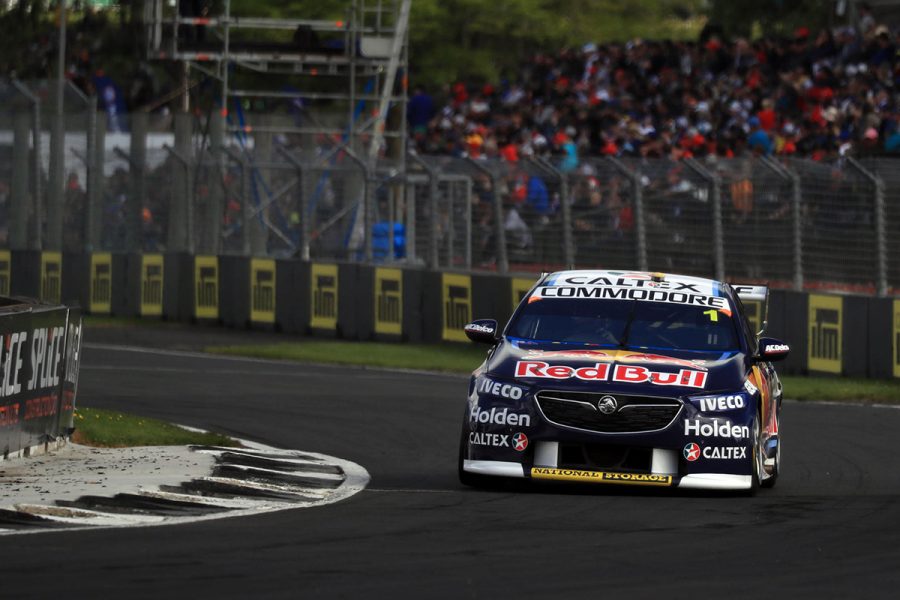 Polesitter Whincup kept the lead off the line and was roughly a second ahead of McLaughlin when he pitted on lap five.

That helped Triple Eight minimise the risk of van Gisbergen, third on the road, having to double stack in the event of Safety Car pitstops.

McLaughlin edged away from van Gisbergen to the tune of 2.2 seconds over the first 10 laps, but started to encounter lapped traffic with cars that had pitted.

It prompted DJR Team Penske to bring McLaughlin in on lap 13, earlier-than-planned, to stop shedding time in the pack.

Van Gisbergen came in the following lap, handing the lead to David Reynolds, but it was a slower stop for the title contender.

An incompressible jack that accompanied making a rear-end set-up change was not removed by the time the #97 Commodore was dropped.

That further lift-and-drop cost van Gisbergen valuable seconds, and dropped him from third to eighth in the effective order on lap 18.

At the front, Whincup's advantage over McLaughlin was out to four seconds, a margin that remained stable until the former pitted for a second time on lap 34.

McLaughlin came in four laps later, emerging just ahead of Whincup and doing enough to stay ahead, despite locking the right-front brake into the back chicane and running marginally wide.

When his tyres were up to temperature, McLaughlin was able to creep away from Whincup and build a one-second buffer.

The gap was 1.2s with 20 laps remaining, but halved with seven to go.

From there, Whincup remained a threat to McLaughlin, having several half-looks into the hairpin before calling off his challenge and dropping back on the final lap.

It left McLaughlin to win with an inflated 12s margin to extend his championship lead from two to 14 points, the pre-event margin.

"I’m proud of the team, they stood behind me no matter what, our fans, there’s so much red and yellow out here today," he added.

Van Gisbergen stayed out until lap 47 until making his second stop, rejoining in fifth place, 12s off the lead and four seconds behind Reynolds and Craig Lowndes immediately ahead.

He cruised up to pass Lowndes with 14 laps remaining, then forced his way past Reynolds at the hairpin three laps later.

At that time, with 10 laps remaining, he was 10s behind Whincup but did not make any inroads from there. 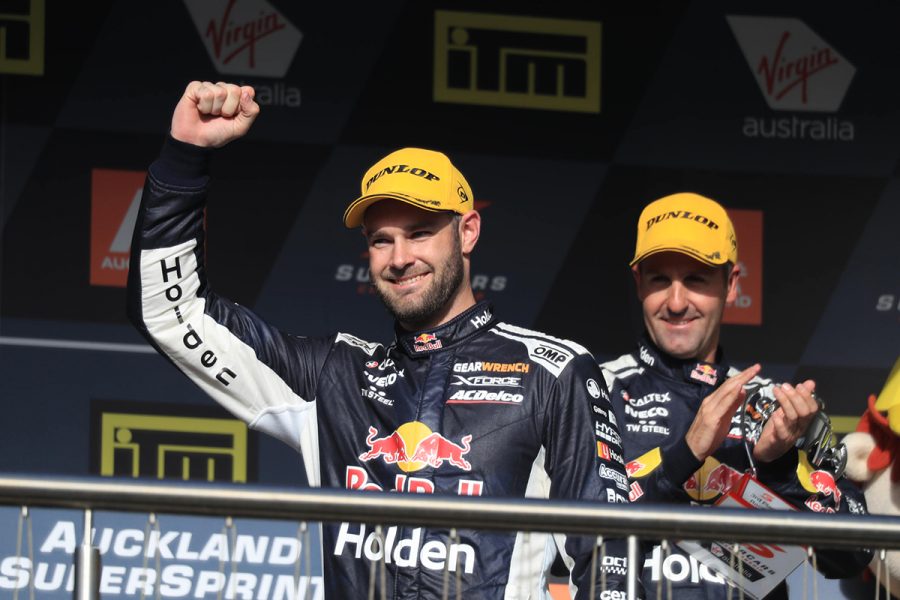 Third became second in the closing metres after Whincup dropped 12s on the final lap so the Red Bull Holdens could trade places.

"We just tweaked it the wrong way, so that was a shame, and just didn’t get it right," van Gisbergen said.

"The JR Trophy, that’s a huge privilege, so congratulations to Scotty and his team.

"Jason was a great guy for our sport and I can’t think of a better guy to win it.

"A tough day for us, but I enjoyed my weekend. It’s been amazing for our sport, two Kiwis going at it, I’m proud to be a part of it."

Whincup added: "Full congratulations to car #17, Scotty drove awesome and team work as well, they were lightning in the stops.

"I thought we had him, four seconds up the road and I think we only had one second less of fuel, but they jumped us in the stop.

"I did everything I could, but happy to have a double podium [for the team] today."

Lowndes demoted Reynolds from fourth to fifth through the final corners one lap after van Gisbergen snatched third.

From 11th on the grid, Lowndes gained track position with a relatively-early stop and put that to good use through the rest of the afternoon.

Reynolds had to settle for fifth in his Penrite Holden, while Tickford's Chaz Mostert and Fabian Coulthard, in a repaired Shell Ford after a Saturday shunt, took sixth and seventh.

Andre Heimgartner grabbed eighth place as the lead Nissan despite a late scare at Turns 2/3, while Mark Winterbottom repeated his Saturday strategy of pitting at the end of lap one.

From 14th on the grid, that ultimately netted ninth place, while Nick Percat rounded out the top 10 from Brad Jones Racing team-mate Tim Slade.

Percat had to work overtime to keep his Coregas NZ Commodore out of the final-corner wall on lap 43, following a hit from Cameron Waters.

Percat was able to bolt from the pack, on fresher tyres, while Waters took 12th, from Garth Tander and Lee Holdsworth.

An incident involving Anton De Pasquale and Heimgartner, who both started inside the top 10, at Turn 8 on the opening lap will be investigated post-race.

De Pasquale was rotated and spun to the back of the pack, and finished 24th, two spots behind Rick Kelly who was also fired off at the same time.

Tim Blanchard picked up early steering damage in contact with Winterbottom, losing 10 laps to be the last of the runners.

The 2018 Virgin Australia Supercars Championship will be decided at the Coates Hire Newcastle 500 on November 23-25.