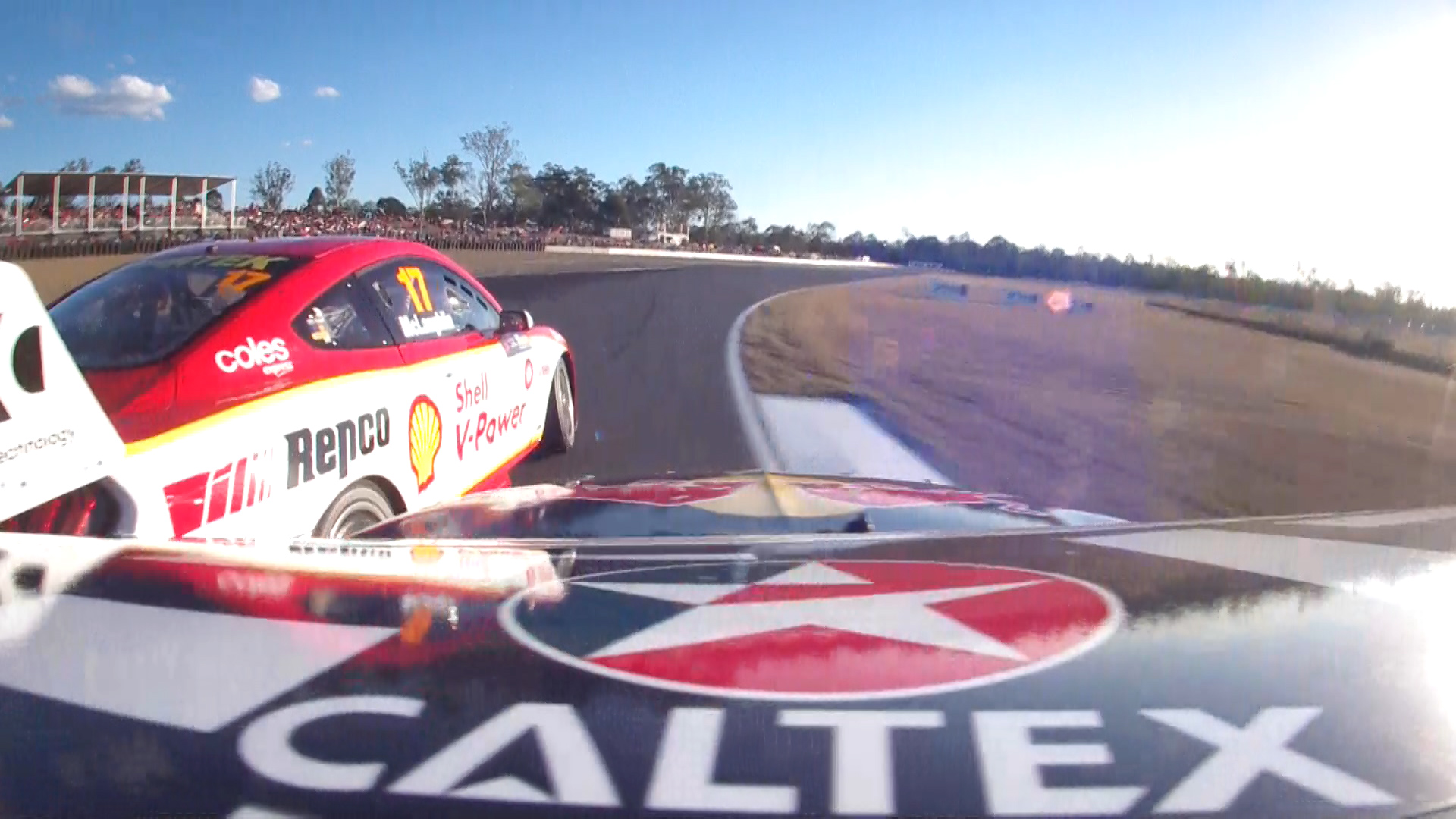 Scott McLaughlin has labelled a frantic opening lap at the Century Batteries Ipswich SuperSprint "good racing", despite being bumped from first to third.

Pole-sitter McLaughlin was under siege in the opening corners, taking the inside in a three-wide squeeze with Jamie Whincup and Will Davison into Turn 1.

Whincup clipped the back of the Mustang as he performed a successful switchback through Turn 1, before Davison elbowed McLaughlin wide at Turn 2.

Delayed later by a slow pitstop, McLaughlin finished fourth, while Whincup and Davison took the top two places on the podium.

It marked the second straight race in which opening lap contact proved costly, following a highly-publicised hit with David Reynolds last-time out in Townsville.

“It was wild, but it was fine. It was good racing,” said McLaughlin of the Ipswich action.

“I went in a little bit too deep into Turn 1 there and Jamie got the switchback.

“I was expecting him to over-under me, but he did it really quick, quicker than I thought.

“That [contact] was nose-to-tail, and then Will… we had a fair bit of opposite lock, but I managed to hold on.

“Both hits felt pretty big. Will’s one was bigger, but the Jamie one wasn’t as bad. It was enough to just shift me a little bit.”

Asked if he felt either bump deserved a penalty, McLaughlin said: “It didn’t tear the right-rear out of my thing, so it was alright!”

Lee Holdsworth and Shane van Gisbergen also looked set to pass McLaughlin due to the Davison hit, before the Shell Ford regained ground under brakes at Turn 3.

"I had a pretty clear path because everyone went to the inside and I was boxed out, so I just bombed it down the outside," he said.

McLaughlin ran third before becoming the first to stop on lap 10; the team choosing an undercut in order to regain the lost track position.

A delay changing the left-front burnt several seconds, which McLaughlin felt cost him a podium, but not a win.

His fourth-place came after being run down by Tickford duo Davison and Chaz Mostert in the second stint, both on fresher tyres.

“I don’t think we could have won [without the pitstop issue], just because of the track position from the start,” he said.

“But I think we could have been a pretty good second. I reckon we lost five seconds.

“When you come in early, try and do the undercut and try and be aggressive, when that stuff happens you basically lose everything.

“I was just holding onto it. I knew they were going to come at me pretty hard, but I was proud of the pace we had.

“We had good pace towards the end. Shane couldn’t really catch us and he had three or four-lap fresher tyres.”