Shell V-Power Racing's Scott McLaughlin took out the second leg of the PIRTEK Perth SuperNight, ahead of Jamie Whincup.

McLaughlin regrouped from a slow start that gave Whincup the lead through the first stint to control the balance of the 84 laps at Barbagallo Wanneroo Raceway.

The defending champion ultimately took his eighth win of the season by 1.9283 seconds from the Red Bull Holden Racing Team's Whincup.

With the results, McLaughlin's championship lead over team-mate Coulthard is 142 points after 12 races.

“Shell V-Power Racing gave us an awesome car; it was the best way to respond.

“I made another balls-up there [off the start], so I’ve got to look at it.

“I think the start was good, the light was just so much faster today, so I’ve got to work on myself.” 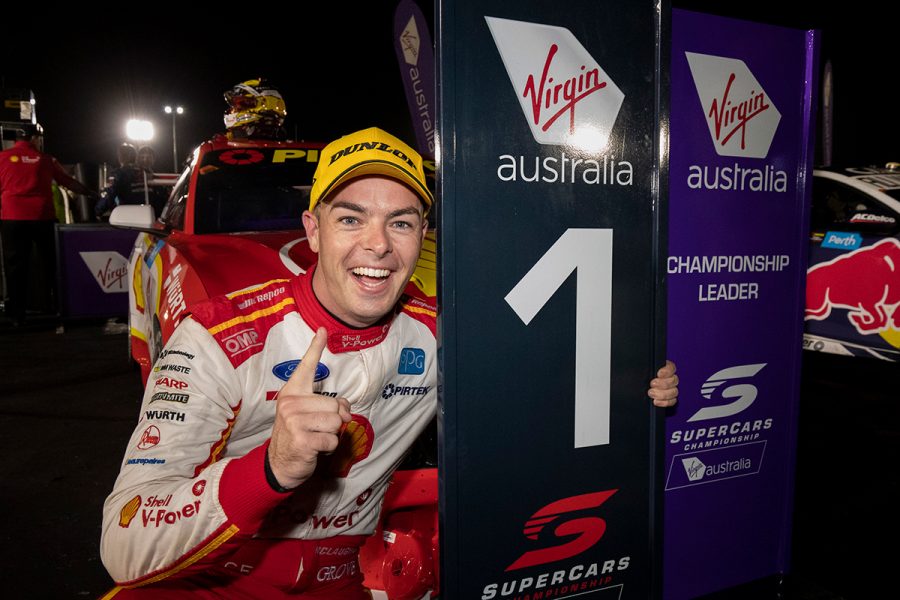 For the second night in a row, polesitter McLaughlin was beaten off the line.

Whincup led into Turn 1, while McLaughlin slotted into second rather than the fourth he fell to 24 hours earlier.

The gap between the top two hovered around half-a-second until McLaughlin pitted for the first time on lap 17.

Triple Eight did not respond immediately, leaving Whincup out for another eight laps as McLaughlin took a five-second advantage.

It had edged out to seven seconds by the time the Safety Car came out on lap 50, when Scott Pye and Andre Heimgartner tangled at the final corner.

It prompted second pitstops for the bulk of the frontrunners, led by McLaughlin and Whincup, who emerged in that order.

Racing resumed with 30 laps remaining, McLaughlin edging away from Whincup to be two seconds clear within 10 laps.

That was effectively how it stayed for the run home, McLaughlin recording the 33rd victory of his Supercars career.

Whincup had to withstand initial pressure from Waters after the restart, but gradually pulled clear and built a comfortable buffer.

Second for Whincup is his first podium since the Albert Park event in March.

“It was a cracker event, I’m just sorry we didn’t have a bit more pace to make a race of it at the end there,” Whincup said.

“But we’ve come a long way since Phillip Island, I’m very proud of the crew. We’ll keep fighting on and pushing hard.”

Chaz Mostert ran third in the early stages, but his Supercheap Auto Mustang dropped a cylinder and lost pace, eventually retiring on lap 27.

By the time the strategies played out, Waters sat third behind the Safety Car, from Coulthard, Rick Kelly and Shane van Gisbergen.

Kelly and van Gisbergen tangled coming back to the green flag, the Castrol Nissan spat onto the grass on the front straight, dropping down the order.

Waters and Coulthard were closely-matched for the run-home, the Monster Mustang sealing the final podium place.

“I’m absolutely rapt. I’ve had a lot of bad luck the last few races through no fault of my own,” Waters said.

“It’s really good for all the boys working hard back at the workshop.”

Penrite Racing pair David Reynolds and Anton De Pasquale grabbed sixth and seventh from 12th and 14th on the grid.

Will Davison took eighth, where he started, while Tickford team-mate Lee Holdsworth made his way from 22nd to ninth.

Brad Jones Racing pair Nick Percat and Tim Slade were 10th and 11th, while Simona De Silvestro was the best of the Kelly Racing Nissans in 12th.

Mark Winterbottom occupied eighth at the restart but ultimately fell to cross the line 15th.

Heimgartner spent the first half of the evening in the top six before his clash with Pye, who retired with left-front damage.