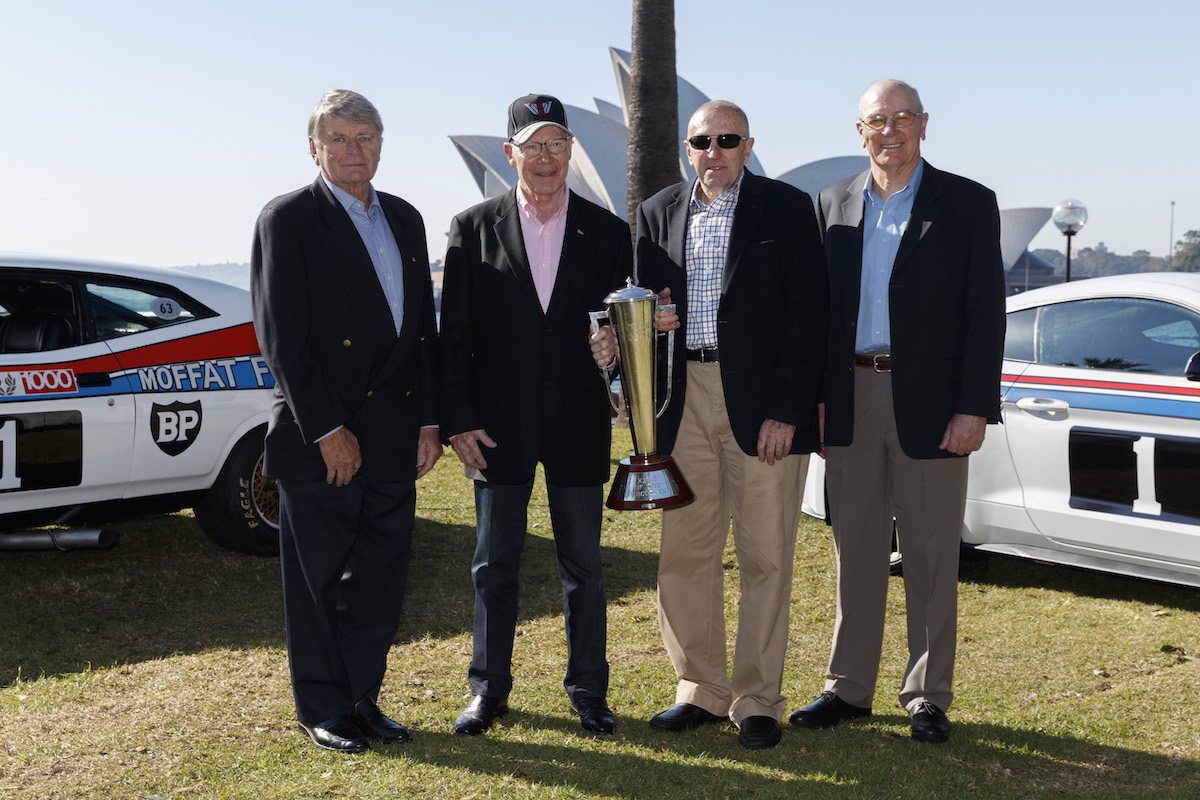 The heroes and legends of Australia’s greatest race will be immortalised at Mount Panorama with a permanent tribute to their achievements at one of the world’s most revered racing circuits.

Twelve of the greatest names in Australian motorsport history will be inducted into ‘Legend’s Lane’ at this year’s Supercheap Auto Bathurst 1000 with the walk of fame to be created by Supercars and Bathurst Regional Council.

The tribute was announced in the lead-up to this year’s event from October 5-8 in Sydney today with Allan Moffat, along with his 1977 Ford Falcon on the 40th anniversary of the famous 1-2 finish, joined by his then team-mate Colin Bond, Jim Richards and Fred Gibson.

Reigning Bathurst winners Will Davison and Jonathon Webb were also on hand for the announcement.

The twelve heroes who etched their names into folklore from the sixties to the nineties will become the inaugural inductees into Legend’s Lane, which will be put to design tender later this year and be in place by the 2018 event.

“This permanent legacy will become a major focal point for Mount Panorama and a place where people can come to pay homage to some of the greatest names in Australian sport,” Supercars CEO James Warburton said.

“This will also be a major tourism drawcard to join the National Motor Racing Museum where of course the Peter Brock statue resides, as a lasting legacy for motorsport in this country.”

Bathurst Mayor Graeme Hanger OAM said with Mount Panorama such an Australian icon the addition of a permanent tribute would be another major drawcard for the thousands of people who visit the circuit each year.

“Mount Panorama holds a special place in the heart of Australian motor sport fans and the proposed tribute to the legends of the Mount will continue to build on the reputation of the circuit as the spiritual home of motor sports in this nation.”

The theme of this year’s event is ‘Heroes and Legends’ with the first of the greats to be inducted into Legend’s Lane to be announced at a function on the Friday evening of race week. Many of their famous cars will also be on display at the event.

The legends will then be honoured prior to the start of the race on Sunday including a driver’s parade. The legends will also conduct autograph sessions for the public on Saturday and Sunday.

A Heroes and Legends merchandise range, including all event lanyards, has been designed and will be available prior to and at the event. FOX Sports will air specials on many of the legends across the event weekend as part of the broadcast and 24-hour Bathurst channel.

Last year’s event finish played out before an average audience of 2.1 million viewers, peaking at 3.1 million, across Fox Sports, Network Ten and WIN TV. An average 2.6 million viewers watched the podium presentation at Mount Panorama, making it the number one program across Australia.

Adding to that, 204,000 people attended the race which was the second highest crowd in the event’s history.