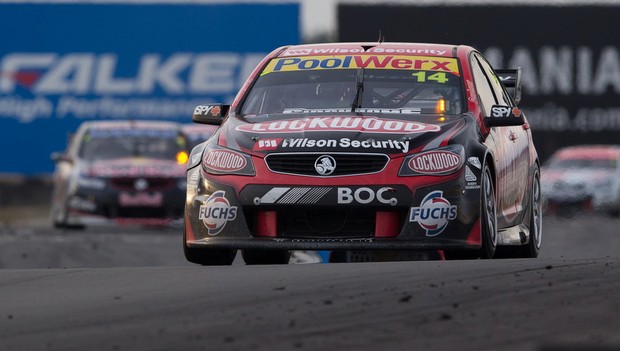 Flying Fabian Coulthard is leading a Kiwi domination of the2013 V8 Supercars wins column as he heads into his home event of thechampionship at Pukekohe this weekend.

However, Coulthard was playing it cool in the aftermath ofhis Symmons Plains heroics.

“It’s awesome to get two race wins and to go back homeobviously full of confidence after winning a couple of races is critical,” hesaid.

“I am pretty ecstatic. I might not show it because I am notan emotional type of person, but it’s been a good weekend, all the guys haveworked very hard in the off-season and given us a car we can fight very hardwith.”

Emotional or not, Coulthard admitted winning the newlystruck Jason Richards Memorial Trophy – named in honour of his Kiwi predecessorin the BJR squad who died of cancer in 2011 – would mean much to him and theteam.

“I don’t think you can put words on it, winning the JasonRichards trophy, that is pretty sentimental to all of us at BJR.”

But having used his 1-3-1 run at Symmons to boost himselffrom 22nd to seventh in the championship, Coulthard has other motivations tocontinue his good form.

“We have a lot of work to do – the key is to finish races,so we will take each round and each race as it comes and make the most of ourchances.

“Our cars are very strong and I think now we have equalmachinery with everyone else that is the true key. I was driving around in acar that was 2008 spec with a few updates here and there. Now we have Car ofthe Future, every car is virtually identical.”

The NZ round of the V8 Supercars championship returns to amodified Pukekohe Park Raceway after five years on the streets of Hamilton,where van Gisbergen was the sole Kiwi race winner in his Stone Brothers RacingFalcon in 2011.

He heads home this time in a Holden after controversiallysplitting with the Stones last year, but says he doesn’t expect to cop muchflak from the fans.

“I am just there to go racing and hopefully they supportme,” said the 23-year old Aucklander. “It will be good, it is always goodracing at home. They tend to support the Kiwi drivers so I’m just going to pushon as usual.”

Like Coulthard, van Gisbergen is also recovering from aClipsal failure – although he fought back brilliantly to win the Sunday race inAdelaide. His 7-12-9 run at Symmons in the Tekno Autosports VIP Pet Foods Commodorewas hampered by going the wrong way on set-up in qualifying on Sunday. Headinghome he lays ninth in the championship.

“I will just go there and do the best I can,” he said. “Ifwe get a top five that will be awesome and any better than that will be prettycool too. We had a DNF at the first race in Adelaide and we are stillrecovering from that, so if we keep getting points I’ll be stoked.”

While van Gisbergen described Pukekohe as “just anotherrace” he conceded collecting the Jason Richards Memorial Trophy would be ahighlight.

“You don’t think about it unless it actually happens but itwould be amazing for one of the Kiwis to win it. The emotion would be prettycool. But we have bigger things to worry about, we have to get the cars betterand myself better to fight for that.”

After two championship rounds where he has consistentlyqualified and raced in the top 10, 19-year old Dunlop Series champ McLaughlin isfifth in the championship in his GRM Fujitsu Commodore and heads home with afull diary of pre-event promotional activities to fulfil.

“We are just sorting through my schedule now and it’s prettyhectic,” the Christchurch native told v8supercars.com.au. “I love theattention, it’s pretty cool.

“But I have a job to do and I need to manage how much time Igive to the media and the fans, but also go out and drive and hopefully comeback with some results as well. Going to Pukekohe is like going to any otherchampionship round, just go there and go hard.”

Like his compatriots, McLaughlin has yet to sample the circuitupgrades that include three new corners on the back straight. But he isconfident he will cope with the challenge.

“All I have ever seen is the video on the V8 Supercarswebsite, but I have driven around Pukekohe enough that I should be alright. Acouple of the turns are new but I am looking forward to seeing what it lookslike.”

Interestingly, of the four Kiwis in the field,Coulthard is the only one to have raced a V8 Supercar at the Pukekohe circuit –van Gisbergen, McLaughlin and Wilson Security DJR driver Jonny Reid are yet tosteer a Supercar at their home track.

Shane van Gisbergen  ›
15' Wilson Security Racing GRM ›
15' Team BOC and Freightliner Racing ›
15' Team Darrell Lea STIX ›
2013 ITM 400 Auckland  ›
Stay In The Know
Sign up to the Virgin Australia Supercars Championship Newsletter
We use cookies to ensure that we give you the best experience on our website. If you continue to use this site we will assume that you are happy with it.Ok