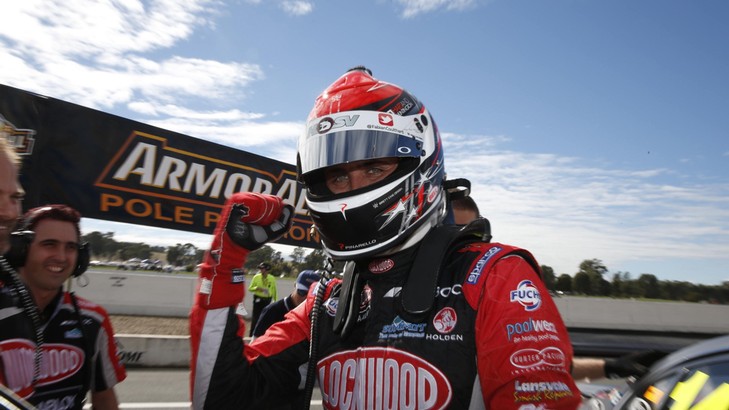 Fabian Coulthard and his Kiwi compatriots have dominated qualifying at the Winton 400.

Coulthard smashed the lap record yesterday in practice and continued to produce spectacular times in the back-to-back qualifying sessions, recording an amazing 1min19.6538 in the second part of qualifying.

All three Kiwi drivers made it into the ‘19s’ in that final session, with Valvoline Racing GRM’s Scott McLaughlin and Team TEKNO VIP Petfoods’ Shane van Gisbergen right behind.

“It takes me a little bit to get excited – but that excited me," Coulthard said.

"To be able to do that – the grip out there is phenomenal. It’s amazing. Mate, it feels like you can’t do any wrong and you’re just along for the ride. You hold on and it’s just awesome.”

Meanwhile, it was a shocker for Red Bull Racing, with Craig Lowndes and Jamie Whincup buried at the back for this afternoon’s second race.

Coulthard has claimed both ARMOR ALL Pole Positions, with van Gisbergen sharing the front row for the first of this afternoon's two 100km races.

Others to note include Bright 13, Courtney 17, Tander 20, Whincup 21, Lowndes 23 and Ingall 25. Ingall did not leave the garage in that session with power steering issues, and qualified 25th in the first also.

Fabian Coulthard  ›
15' Team BOC and Freightliner Racing ›
2014 Winton 400  ›
Stay In The Know
Sign up to the Virgin Australia Supercars Championship Newsletter
We use cookies to ensure that we give you the best experience on our website. If you continue to use this site we will assume that you are happy with it.Ok