The team came off its first Championship win in Adelaide, but there’s been no chance to slow for Lucas Dumbrell Motorsport.

Fortunately the cars didn’t sustain damage at the not-for-points grand prix – a crash last year put the team in a tough position with Nick Percat needing a new car that was ultimately shipped down by the Spirit of Tasmania!

Engineer Chris Stuckey says they are more prepared this time around.

“We came out of Sunday’s race (at AGP) with two straight cars – with only a short turnaround it was critical for us,” he told v8supercars.com.

“Our drivers were well aware of what any unnecessary damage would mean and drove accordingly.”

While the race win was a boost for the team, LDM has all eyes forward.

“We haven’t had too much time to get carried away with it (the win) especially knowing we still have big challenges ahead to achieve our goals,” Stuckey said.

He explained the ins and outs of racing in Tasmania this weekend with a revised Saturday format. 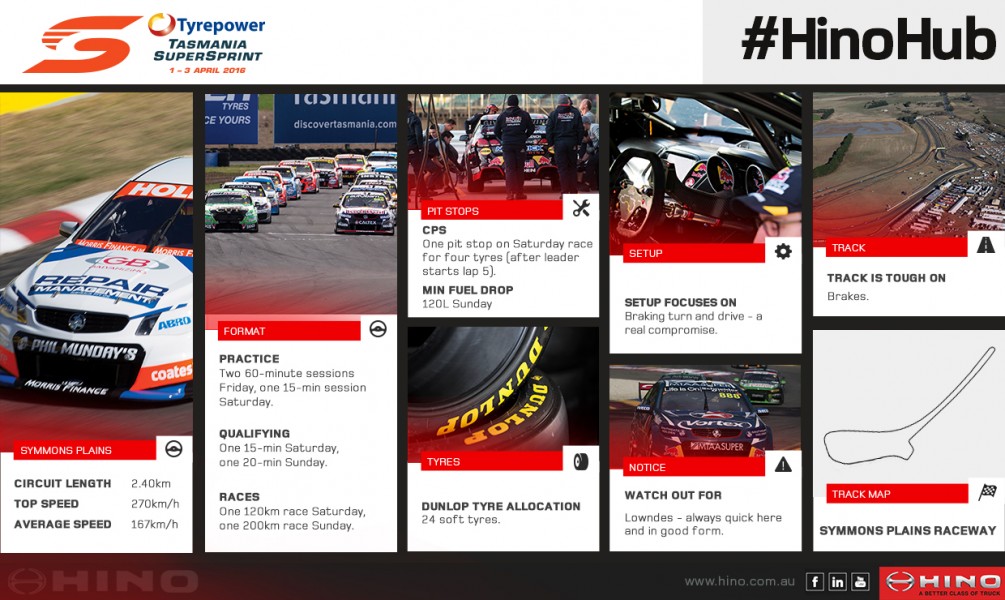 The short Symmons Plains track is deceptively simple on paper.

“[It] throws up a few challenges with all the corners being quite different,” Stuckey explained.

“It’s a short circuit with two big braking zones. A large part of the lap is spent at 100 per cent throttle.”

The hairpin is always spectacular and the straight sees the Supercars up to 270km/hour.

“Passing is always difficult – but the two big stops here can provide an opportunity to pass.

“There is always controversy here as it’s a fine line between a clean pass and making contact.

“A good run in and off the hairpin will be needed to look for a way through at turn six.”

Those two big stops mean the circuit is toughest on brakes.

“They are in short succession and being tucked up in traffic can limit brake cooling and have an impact of performance,” Stuckey said.

Stay out of trouble at turn four, the hairpin, and be mindful of the gains that can be made there.

“There is a lot of time to be made at the hairpin, that seems to be the key to a good lap time.”

“You need to put the power down, the run over the T1 crest and exit of T2 tends to be difficult also. Braking is important.”

Stuckey believes the tyre allocation is “perfectly suited to the format” this weekend, with good tyres available for each stint and the chance to have multiple runs during the qualifying sessions.

Teams have a set of practice tyres that must be handed back before qualifying, to use during practice. That leaves five sets of green softs for two qualifying sessions and two races.

“Two sets will be used in the 15-minute qualifying session on Saturday, and those eight will be used to satisfy the CPS requirement in the following race.

“That leaves another three sets for Qualifying on Sunday and again, with two stops required [to meet the fuel requirement] the tyres will all be used.

“Low degradation here normally means there won’t be a big demand in trying to re-use anything.”

There are two hour-long sessions on Friday, with another quick 15-minute opportunity to practice on Saturday before the weekend’s first qualifying session.

Stuckey says while there is plenty of time, teams need to prioritise what to work through.

“We will need to work out what’s important to be quick, and with such different types of corners there are compromises that will to be made,” he said.

“Working out what the priorities are on the run is always difficult, thankfully we don’t head straight into Qualifying for the first time this year!”

Keep an eye on who is on which compound of tyre at home, because tyre banks may not allow everyone to use the soft tyre.

“We saw Lowndes was really quick on the hard tyre last year, but was nestled in amongst the soft tyre runners. When it counted his form became clear.”

That final session on Saturday means drivers and engineers can assess any changes made overnight.

“We could see a lot of teams opt to use the hand-back set of tyres, which will be a good form guide for qualifying.”

The format change means Saturday only has one longer qualifying session, 15-minutes instead of 10.

Drivers should have every chance to put their best lap together, with two runs on good tyres instead of one.

Given the tight nature of the Symmons circuit, Stuckey says it’s important to qualify at the front.

“Potentially (qualifying here is) one of the most critical, as passing is really difficult, and with the lack of tyre degradation it’s more difficult to move through the field late in the race, as we have seen the HRT cars do in some of the higher tyre wear circuits last year.”

With a compulsory pit stop (after the leader starts lap five), strategy will play a role in the race.

The use of the soft tyre and a generous allocation adds to that.

“Last year all cars double stinted their tyres and did a high percentage of the race on the one set of soft tyres – three sets this year will allow for a variety of strategy options with the fuel window being so wide,” Stuckey explained.

The grippier tyre means drivers should have more confidence to pass, which should spice up the racing.

“There is passing seen at the hairpin but not without a good speed advantage – for those in a tight battle the best place is turn six. And for that to work there needs to be a decisive move – the soft tyre definitely helps that.”

What are the main things to consider regarding strategy?

“Clear air will important, and minimising the risk of double stacking with your teammate.

“I think we will see varied options as teams look for clear track.

“The risk of going a lap down will also play on the team’s minds.”

The distance hasn’t changed, but Sunday’s race will also be very different now there’s just the one tyre compound.

“Last year was about how far you could stretch the soft tyre, and how you would manage it in terms of cooling them off or double stinting, rotating all four or only two,” Stuckey said.

“A lot of the work for last year’s event has been removed.”

Cars can pit on lap one during this race, which some may do to reduce the chance of double stacking teammates.

“We have seen teams are prepared to stop early here.

“There may be some options in looking for clear air but we see increasingly so teams short filling early to keep track position in the first round of stops.”

The magic number for fuel?

“We have seen teams get really good fuel economy when they have to, like at the Gold Coast last year.

“On a normal run to the flag we could see some pit as soon as they can to get home – this could be anywhere from lap 34 to 42 depending on fuel economy.”

A very big danger at such a short track – it’s easy to go a lap down at Symmons and engineers need to keep a keen eye on the leader and who is yet to pit.

There’s a high chance the Safety Car will come out – the last round without one was way back in 1998.

An early Safety Car on Saturday will change the CPS window, with teams to be notified when the window does open.

“It’s normal to see cars pit early here at the opening of the pit CPS – once the window is opened any Safety Car period will see those that haven’t pitted complete their CPS requirement.”

The Tyrepower Tasmania SuperSprint kicks off with practice tomorrow – click here for all the details. Follow live on FOX SPORTS 506.