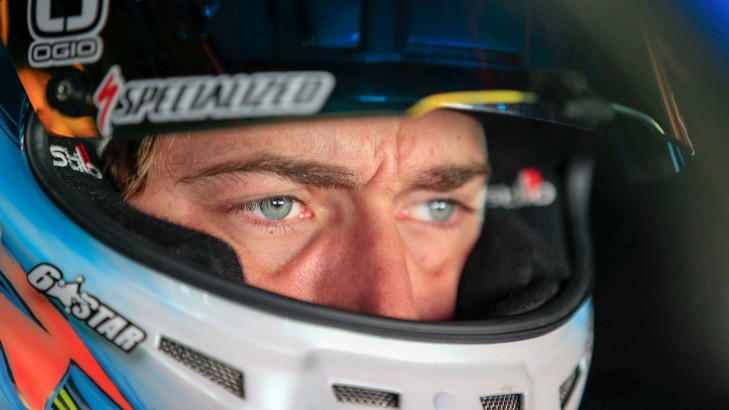 Prodrive Racing Australia has issued a 'hands off' edict to any rival teams trying to poach young superstar Chaz Mostert.

And team principal Tim Edwards has slammed "lazy" and "stupid" rivals who are not prepared to groom young drivers of their own.

The 22-year old Pepsi Max Ford Falcon FG X driver is understood to be on a 2+2 arrangement with PRA, which he signed before the 2014 season.

That means he is now in the second year of a two-year driving contract with PRA, with a two year option the team says it can exercise exclusively up until approximately October.

Despite that, the chatter along pitlane at the Clipsal 500 last weekend was that Mostert, his father Eddie and his management have been regularly fielding enquiries from rival teams.

"He's flattered by it," Edwards told v8supercars.com.au when asked to confirm Mostert had been sounded out by other teams and what he thought about it.

"If I elected not to exercise our option then of course other teams could make him offers," Edwards continued.

"I'll leave it to you to read between the lines about whether I may or may not exercise my option."

The surfacing of Mostert's name on the rumour mill simply adds more intrigue to what is shaping as one of the most intense driver transfer seasons in the history of the V8 Supercars Championship.

Craig Lowndes, Shane van Gisbergen, Fabian Coulthard, David Reynolds and James Moffat are all out of contract at the end of this season, while young gun Scott Pye - who is managed by Triple Eight owner Roland Dane - is looking to force his way back into the main game.

Another rising talent who will be pushing for a drive in 2016 is PRA's latest V8 Supercars Dunlop Series star Cameron Waters.

The 20-year old from Mildura is following Mostert along the development series path into the championship.

Mostert has been constantly on the rise since debuting with Dick Johnson Racing on loan from PRA early in the 2013 season. He moved home to PRA in 2014 to replace the departing Will Davison, won an extraordinary Supercheap Auto Bathurst 1000 with Paul Morris and finished seventh in the championship.

"Of course there is interest in him and you know what? So there should be. He is one of the stars of the category," said Edwards.

"But go and find your own bloody drivers," he added, referring to rival teams. "If people are too lazy or stupid to go and invest in drivers for the future then that is their own fault.

"If they want to go and throw loads of money around because they have been too negligent to develop their own drivers for the future then that is their issue."

Mostert, who is expected to emerge as one of the superstars of the category over the next few years, made a great start to the opening round of the championship last weekend at the Clipsal 500, by finishing second in the opening 125km race behind Red Bull's defending champion Jamie Whincup.

But he blotted his copybook crashing in the second 125km race at the fiercesome Turn Eight and had another big accident on the last lap of the 250km race three when battling with Whincup for fourth place on the last lap.

PRA has confirmed that Mostert's brand new chassis will be rebuilt in time for the showcaseFormula 1 Rolex Australian Grand Prix, while teammate Reynolds will be upgraded to a new Bottle-O FG X as scheduled.

Volvo vows to bounce back from "shocker"

Inside Supercars debuts this evening

2015 Clipsal 500 Adelaide  ›
Stay In The Know
Sign up to the Virgin Australia Supercars Championship Newsletter
We use cookies to ensure that we give you the best experience on our website. If you continue to use this site we will assume that you are happy with it.Ok