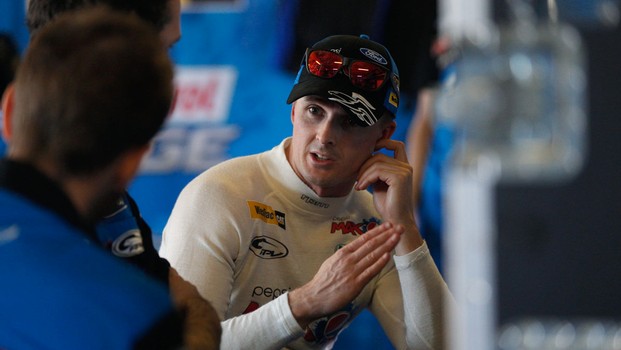 Mark Winterbottom has pounced from second on the grid to take the first win of the day and his first in over 12 months.

He was followed home by pole sitter James Courtney in his Holden Racing Team Commodore; with Craig Lowndes in third, recovering from starting 10th on the grid this morning.

Just two drivers started the race on soft tyres – Dean Fiore and Russell Ingall flying through the field in the first part – but it was Winterbottom who was faultless throughout the 35 lap race, on his way to a long awaited victory.

Winterbottom had a terrible result yesterday, turning around teammate David Reynolds and being reprimanded with a drive through penalty. But it's a new day for the team, with the Pepsi Max cars claiming first and fourth.

This is Ford's second win for 2013, with Will Davison having taken victory earlier in the season at New Zealand at the Auckland 400.

This result shifts Will Davison back into third in the Championship, ahead of Fabian Coulthard.

The rest of the top 10 was made up of Jamie Whincup in fifth, followed by Jonathon Webb, Coulthard, Shane van Gisbergen, Garth Tander and Reynolds.

The final race at Hidden Valley begins at 3.45pm (4.15EST) with Reynolds starting from p1.

Mark Winterbottom  ›
15' Pepsi Max Crew ›
15' Red Bull Racing Australia ›
15' Holden Racing Team ›
2013 SKYCITY Triple Crown  ›
Stay In The Know
Sign up to the Virgin Australia Supercars Championship Newsletter
We use cookies to ensure that we give you the best experience on our website. If you continue to use this site we will assume that you are happy with it.Ok