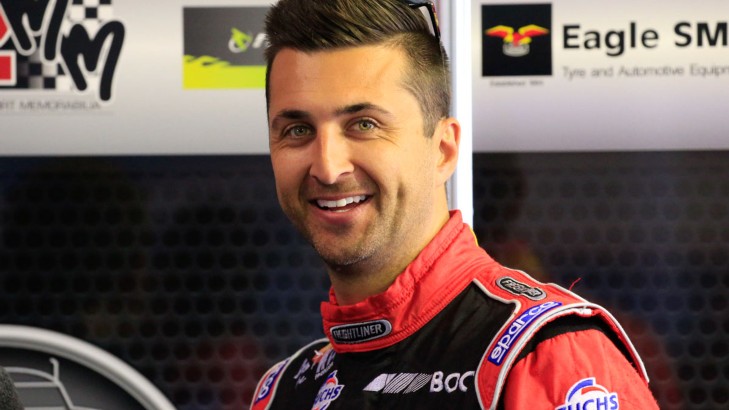 Fabian Coulthard says he is not bothered by speculation around his contract for next year, as silly season talk goes up a gear in V8 Supercars.

But the driver who holds the fastest lap time around Mount Panorama has his eyes forward, not worrying about his Championship position or being the name on everybody's lips as he aims to rise above the lows he's experienced at the mountain in previous years.

Speculation has been rife that the 33-year old Kiwi is the favourite for DJR Team Penske next year - and while driver and sponsor movements were a key talking point in the paddock at Sandown, Coulthard played it cool.

"[The talk] doesn't affect me at all, you know what I mean. When you're up for contract it's just something you have to face," he told v8supercars.com.au.

"You just put it to the back of your mind and what can you do about it? Obviously there's going to be talk and speculation, but I only know what's happening, so you just have to deal with it."

He has been touted the 'key' to the whole puzzle, and admitted it was a good feeling to be sought-after in the pit lane.

"Like you say it's a nice position to be in - but I've got a job to do and that's to do the best possible job for BJR.

"It's a little bit of a distraction but my focus is to give these guys the best possible results we can, every single weekend - and we'll worry about that later on."

While BJR has had success with podiums at Bathurst, the team is yet to stand on the top step. Many will remember Coulthard from the 2010 highlights reel when he raced for Walkinshaw Racing, flying through the air during a spectacular rollover - so on a personal level, he also has a point to prove at the next event in the Championship, the Supercheap Auto Bathurst 1000.

"I've seen a lot of lows - the crash in 2010, I've been a little bit unlucky here and there - but I think this year we've been consistent, I feel like we can string some more consistency together and give ourselves the best possible shot," Coulthard said.

"Obviously our cars are pretty good up there - like you said, we got the lap record there last year - so I'm full of confidence. Our car has been strong at places it hasn't been very strong before, so it's all heading in the right direction."

While Coulthard led the Championship points after the second race at the Clipsal 500 this, the highest he has been of late was second after the second race in Townsville. He currently sits fifth and 521 points away from leader Mark Winterbottom - but he will assess that once thelong-distance races are complete. After the Gold Coast enduro, there will still be three events to run at Pukekohe in New Zealand, Phillip Island and the Homebush finale.

"We'll evaluate that after the enduros," Coulthard said.

"There's so many points on offer you can have a shocking year up to this point, but the amount of points that are on offer for those three events are a lot, [with the right] results, so we'll evaluate it after then."

Though Coulthard and Youlden looked solidly in the top 10 early on at Sandown, tyre punctures cruelled their campaign - the #14 Freightliner Racer suffered from two throughout the race, including one on the line, dropping a position.

"I thought qualifying sixth on Saturday we'd unlocked something - but in the races we struggled for pace and two punctures," Coulthard explained.

"You just can't have those things stack against you in such a competitive field.

"So look, it's been a tough one, it's always tough every year we come here is tough so we just can't get rid of that 500km monkey off our back.

"I had a puncture mid race and then Jamie got me on the line, I had another one on the last lap ... so we had everything stacked against us, nothing fell our way."