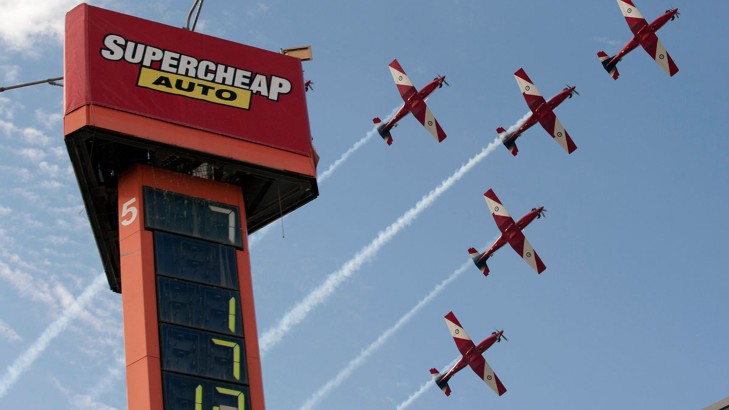 The Royal Australian Air Force will put on a spectacular show in the skies above Mount Panorama this weekend at the Supercheap Auto Bathurst 1000.

Across the entire weekend, the RAAF Roulettes will take to the skies to perform breath-taking displays, using only hand-eye coordination to fly at speeds of up to 590 kilometres per hour.

During their impressive air show, the elite formation aerobic team may experience up to 4.5G of force in their PC-9/A aircraft - 4.5 times the normal force of gravity, which V8 Supercars General Manager of Events Phil Shaw said will add to the epic line-up of entertainment on offer at Bathurst this weekend.

"It's wonderful to have such incredible support from the RAAF and see the amazing talent of these men and women and their machines," he said.

"Having the presence of the six roulettes will really add to the high-octane entertainment that V8 Supercar fans know and love.

"With the RAAF showing their skills at the most iconic motorsport event in Australia, the Supercheap Auto Bathurst 1000 is an epic show that race goers will not want to miss."

Click here for more information about the entertainment options on offer at the Supercheap Auto Bathurst 1000.

In addition to the Roulettes, the RAAF will also deploy a FA-18 Hornet to Mount Panorama showcasing incredible speeds and the unforgettable noise that follows.

The Hornet will take to the skies above the circuit for the traditional flyover on Saturday and Sunday, before the V8 Supercars battle it out for 1000 kilometres for the Peter Brock Trophy.

Make sure you're trackside to see the RAAF in action at the Supercheap Auto Bathurst 1000. Book your tickets now at Ticketek.com.au.

06/10/2014
Related Content
2014 Supercheap Auto Bathurst 1000  ›
Stay In The Know
Sign up to the Virgin Australia Supercars Championship Newsletter
We use cookies to ensure that we give you the best experience on our website. If you continue to use this site we will assume that you are happy with it.Ok