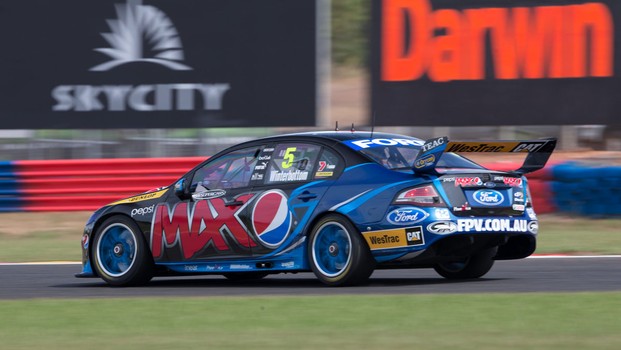 “We’ve gone quite well at times this year and we’ve all worked very hard to rectify the few issues we’ve had and while it is nice to be on top, until tomorrow we really won’t know where we sit in the order. Hopefully we will carry this pace onto tomorrow and if we can end the day in the same spot I’ll be very happy."

“We are definitely making progress but we have been well behind in development compared to everyone else.

“The guys have been doing a huge amount of work and we have got some new things this weekend, which are not all performance related.

“There have been some mechanical issues that have been hampering us since the start of the year and it is nice to progress with those things as well.

“You don’t really know who’s where today and we won’t know exactly where we are at until qualifying tomorrow, but it’s a little bit of a reward for the guys in the garage.”

"(The track’s) cool, I liked it on the soft tyre, I think it’s a bit of a dog at the moment on hard tyres, so we’ll try and fix it up a little bit. But on the soft tyre it’s really good fun, you can throw it around a bit but in the race, but you have to look after those rear tyres. I’m having a bit of fun like I have been all year."

"Rest of practice trouble free.. Ended up 4th for the day. Putting new softs on after hard tyres was a big difference!"

“We tried a lot of things. I don’t think we’ve ever tried this many set-up changes.

“We have all four Altimas in the top 10, so it’s great start to the weekend for the team. The boys have been working very hard back at the workshop.”

"It's almost like driving on ice after you've done a few laps, especially on the hard tyre, so you spend most of the day making changes and going back out an battling to keep the car on the track.

"In the middle of the day, I think for the whole field, everyone would have been quite frustrated with their progress.

"Before the last session, we sat down and had a really in depth discussion with my engineer, Perry Kapper, on what we'd learnt from the previous practice sessions and what we needed to do.

"I think we'll learn more tomorrow in qualifying, but it's certainly a positive start."

"It's hard to say where we are at with tyres with stuff like that and how many people put softs on. I wasn't really pleased with the car all day, we made some progress through the day but still a little way off…

A nice way to start the weekend, we haven't been this far up at the start of the weekend all year so hopefully some positive signs for Erebus and IRWIN Racing."

"Hard to know exactly what our pace was like with a huge difference in tyres but feeling good about the car. Looking forward to tomorrow."

“Considering we ended inside the top 10, it sounds silly to say that we struggled today.

“I’m not very comfortable in the car at the moment, so we’ve got a bit of work to do overnight to get it up to speed.

“Caruso has been speedy all day, no matter what tyre has been on his car. We’ll have a look at what he’s doing and see if we can come up with something that will be more competitive.”

"The track was very slippery, which we're quite used to in Darwin, as the surface deteriorates year after year, it gets a little more greasy every time we come up.

"The slippery surface really pushes you to be patient with how you drive the car. You have be gentle on the brakes, gentle on the steering and very patient on the exit of each corner. If you don't you get oversteer and wheel spin.

"We went a few different ways with car set-up during the four sessions. We were hampered a bit by a steering issue that we'll fix up overnight, but overall, I thought it was a good day. We've definitely got the car closer to where it needs to be, compared to when we rolled it out of the truck."

"Will be digging deep into the data tonight to make sure we're up the front in qualifying for tomorrow's 60/60 races."

“Darwin is always a tyre battle on a Friday and today was no different. We put a reasonably good set of used hard tyres on and the time was pretty good and it felt okay so we are not complaining. Tomorrow will reveal the big picture but we used a lot of what we learnt at the test day and it seemed to bring improvement, so that is encouraging.”

"No Softs for @holden_racing cars today. I also got my blouse caught in the brake pedal into turn 1 at the end on good hard tyre."

"The car balance was good, the consistency was actually surprisingly good as well. We’re really happy with the cars.

"The practice times weren’t actually indicative of our real speed. With one set of soft tyres and two sets of hard tyres for practice you’ve got to decide how you use them over the three sessions.

"We ran the first session on used soft tyres, the quicker tyre, and did a 12-lap race run to see how they’d perform over the weekend and after that we went to hards for the final two sessions when the rest of the field went to softs.

"So the timesheet doesn’t concern us, both Jamie and I were simulating race runs on each of the tyres because there’s big tyre degradation at this circuit and we made a decision to save our softs for qualifying.”

“I am quite confident of being much better tomorrow but it was a pretty painful day as the pre-marked tyres we brought weren’t the best as we’ve tested recently. The top 13 cars ran softs whereas we didn’t so the timesheets don’t look favourable but I am sure it will all swing around tomorrow when we use fresh rubber. It was a very low grip day but the balance of the car is great so without being too confident tomorrow will make a lot more sense.”

"4 sessions in Darwin today. No softs on yet but still need to work on that balance. Great job by (Tim Slade) so hoping to pinch some ideas."

“I am not unhappy with the car at all and while we were competitive at the start of the day we decided to hold back on using fresh tyres so our position on the board won’t be anything like the same tomorrow. I would feel more comfortable if we could’ve learnt a bit more today to take away some of the guesswork for qualifying but I think we are in pretty good shape.”

14/06/2013
Related Content
Chilled-out Frosty Fastest at Darwin  ›
14/06/2013
Slade Talks Down Chances After Result  ›
14/06/2013
2013 SKYCITY Triple Crown  ›
Stay In The Know
Sign up to the Virgin Australia Supercars Championship Newsletter
We use cookies to ensure that we give you the best experience on our website. If you continue to use this site we will assume that you are happy with it.Ok