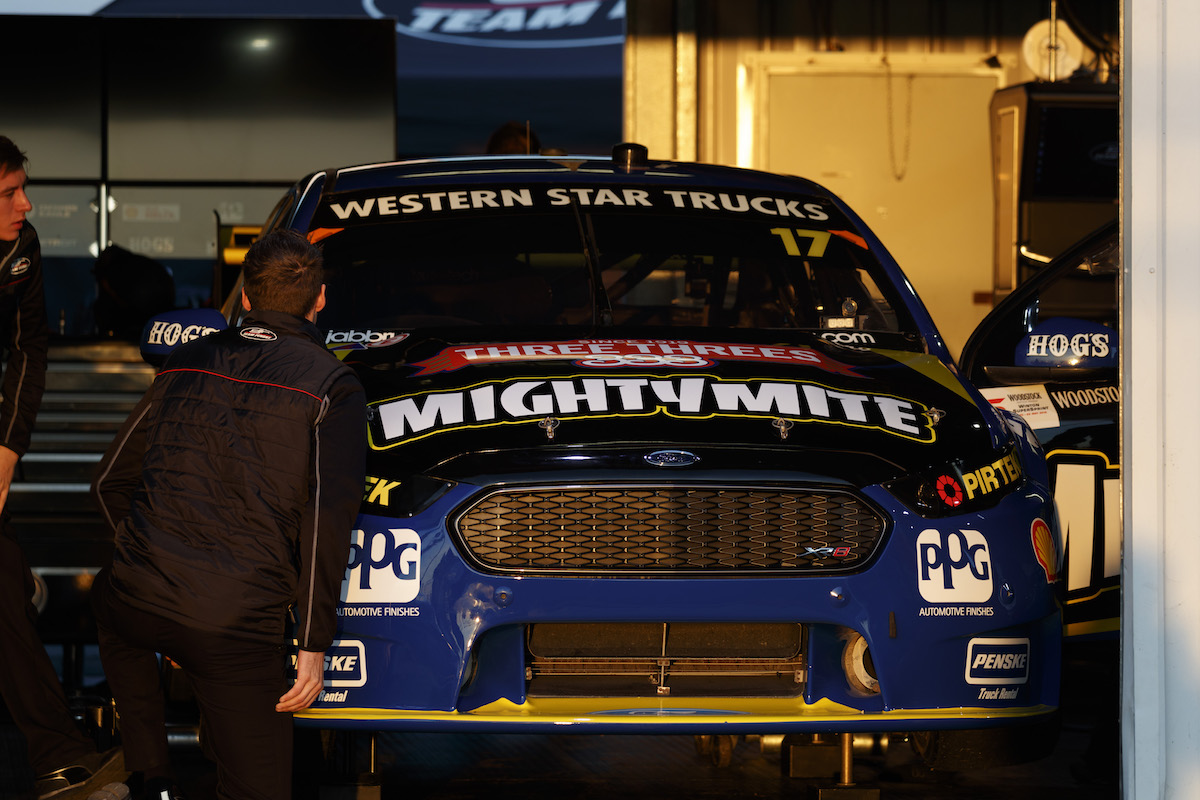 Young gun Scott Pye’s fight to retain his seat at DJR Team Penske beyond 2016 will receive a boost at this month’s CrownBet Triple Crown Darwin when he debuts a brand new Ford Falcon FG X Supercar.

Pye will shake down his new FG X during a test at Ipswich next Tuesday, a date DJRTP is scheduled to share with Triple Eight Race Engineering and TEKNO Autosports.

Pye’s upgrade puts him on par with team-mate Fabian Coulthard, who began the season with his new team in a brand new car. Pye’s current Falcon dates back to 2014.

The 26-year old is on a one-year deal with DJRTP and senior team management from owner Roger Penske down have made it clear he is driving for his future.

There has been strong media speculation that Scott McLaughlin is headed north from Garry Rogers Motorsport to take Pye’s seat next year.

But DJRTP managing director Dr Ryan Story insists Pye is being given every chance to prove himself.

“The thing with Scott is we have invested heavily in him in expanding to two cars and Roger (Penske) made it clear in Perth too that we have to give him time to show us what he can do and we are doing that,” Story told supercars.com.

“We are not going to make any decisions on what next year looks like until much later in the year and he will have every opportunity to prove that he is a worthy guy to continue on in the place that he is in.”

Pye, a graduate of the exceptional 2012 Dunlop development series that also produced McLaughlin, Chaz Mostert and Nick Percat, was last year signed as the team’s endurance co-driver alongside Marcos Ambrose and took over the full-time drive when the Tasmanian stepped aside after just two events.

He looked set to be replaced by Fabian Coulthard for this year until a strong performance in the Supercheap Auto Bathurst 1000 prompted Penske to expand to two cars a year ahead of schedule.

So far Pye has been good competition to his more experienced team-mate, claiming the first pole position of the season at the Clipsal 500 and a third place finish at Phillip Island. He currently runs 16th in the championship.

Coulthard has claimed one pole – also at the Clipsal 500 – and two third place finishes and runs 14th in the championship.

The move to the new car follows on from DJRTP’s off-season decision to sever its engineering links with fellow Ford team Prodrive Racing Australia and go its own way on development this year.

That process is understood to have included testing Ohlins shocks as well as the Australian Supashock dampers that have been an important part of PRA’s success in the NewGen (Car of the Future) era.

“We still use Supashock but we are looking at other products that are available to us as well,” said Story. “The Supashock is still the fundamental foundation of what we roll up to the track with at every round with both cars.

“We are looking at it (Ohlins), but it’s not always what we race on.”

Story was more cautious in his assessment of DJRTP’s 2016 progress than Coulthard, who told the media at Winton that the team was ahead of schedule.

“I think we are pretty close to where we hoped to be,” he said.

“Starting off at Clipsal and getting a couple of pole positions was a bit of a surprise but I think we settled back into reality pretty quickly when you look at it.

“We have just had some inconsistencies along the way and I think as we continue to iron some of those things out our form will actually come to the fore.”

An issue for DJRTP in 2016 has been the incorporation of a significant number of new personnel, including two new engineers, because of the expansion to two cars.