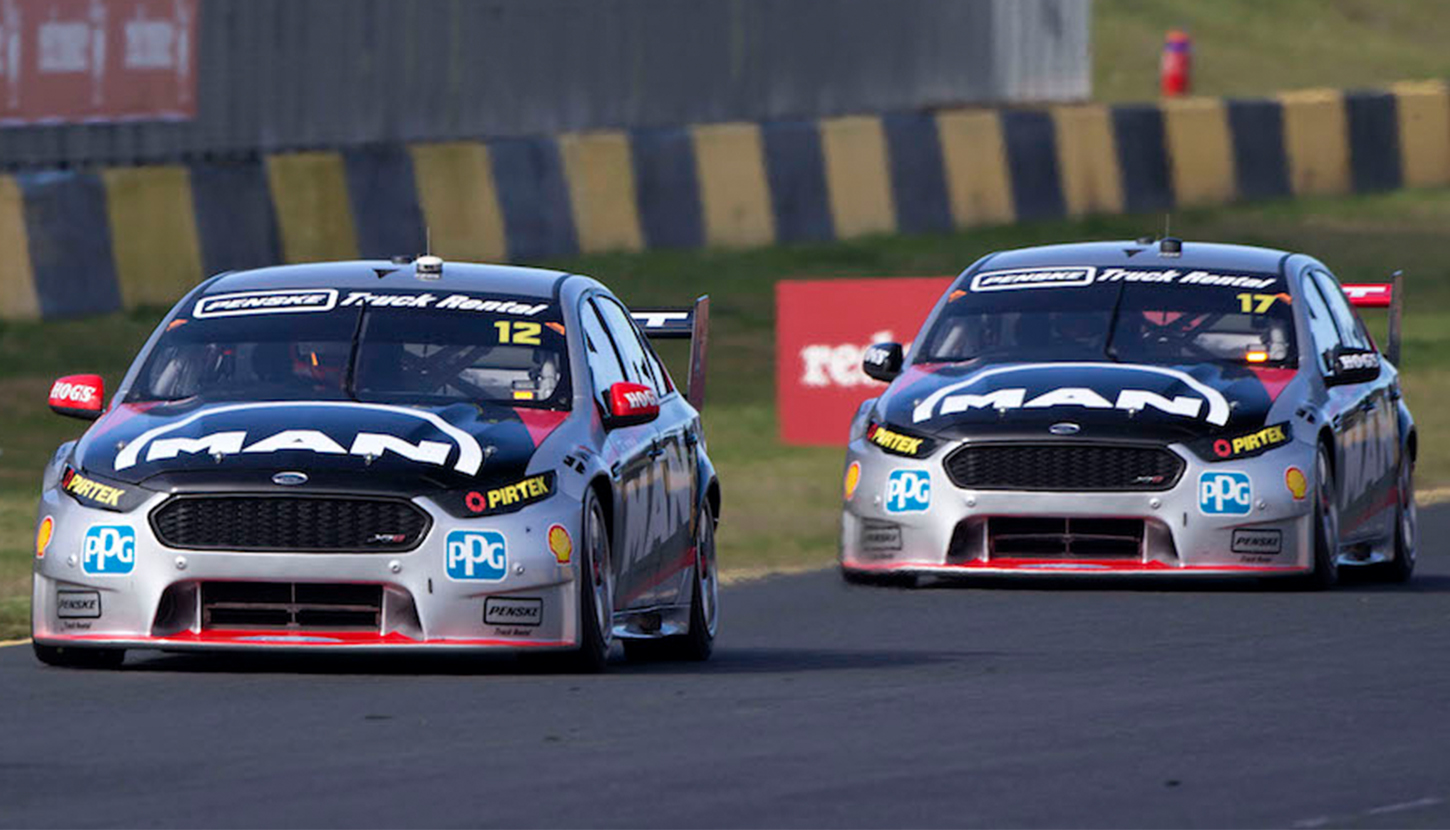 DJR Team Penske heads to the home of Scott Pye’s first Supercars podium for the next event, bringing back MAN colours for the ITM Auckland SuperSprint.

The team is positive characteristics of the Pukekohe circuit – with sweeping corners and hard tyres – will suit the Ford Falcon FG Xs, as it focuses on bouncing back from a horror weekend on the Gold Coast.

Involved in a high speed accident with Garth Tander, Fabian Coulthard’s car was repaired miraculously overnight to hit the grid on Sunday. Fortunately, the level of repair means there has not been too much extra work to carry out this week, with a tight turnaround seeing the cars freighted to New Zealand on Sunday from Avalon Airport in Melbourne.

While the last event was a tough one, the team has come leaps and bounds since its last visit to New Zealand, scoring a podium under the watchful eyes of Roger Penske – its first under the DJR Team Penske guise. 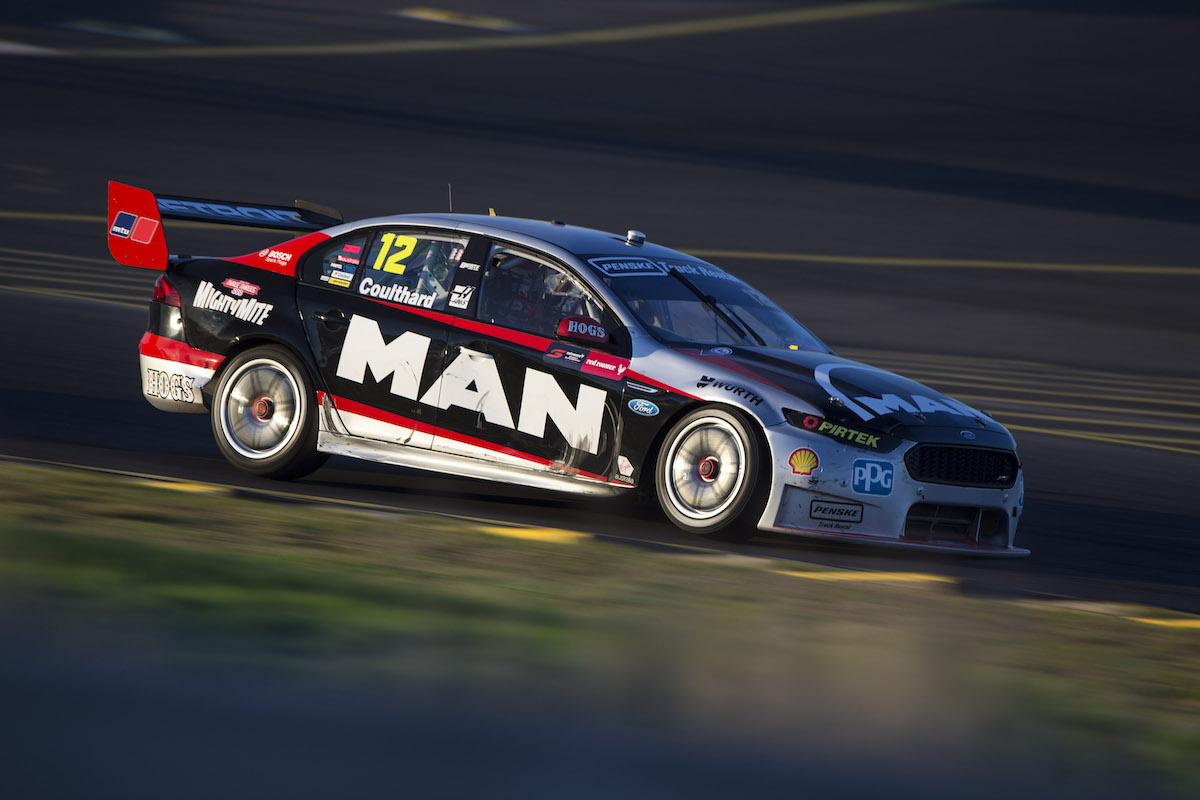 Pye finished the championship 19th, after missing the Clipsal 500 while Marcos Ambrose drove in 2015; while this year Coulthard and Pye and 12th and 15th in the title race respectively.

Managing director Ryan Story is pleased to return to the track with MAN Truck and Bus for the ITM Auckland SuperSprint.

He reflected on the year that has been with supercars.com, after earning pole positions at the Clipsal 500, podiums early on and two top six results at Bathurst while still settling after expanding to a two car operation.

“I think we’ve come a long way in terms of the team structure, and I think the team as a whole is working better – the results have not always been reflective of the work that has been going on in the background,” Story told supercars.com.

“We started off the year being able to repeat those strong top five and top three finishes, and as I sit here in my office I look down and see the trophies for the third places both cars had at Phillip Island and it seems like a very long time ago now.

“Auckland was a happy hunting ground for us last year, it was very special to get our first podium as DJR Team Penske last year with Roger in attendance.

“We’re certainly heading back with some confidence and hoping to be able to repeat that as well.”

While the DJR Team Penske Ford Falcon FG Xs have evolved since the 2015 Pukekohe races, Story is still confident of a good showing.

“Last year the car has some differences there and we’ve learnt a reasonable amount, given that the people mix has changed so much in that time.

“We’re continuing to find our feet in a lot of ways and learn from what have been some challenging results.

“Certainly if you take Gold Coast out as being an aberration, the previous few events we had decent, consistent, repeatable speed – and that’s really what we hope for.”

While there was a pit stop issue for the team at the last round, on the whole Story believes DJRTP has hugely improved its work in the lane. Strategy has been more aggressive – at Bathurst, Penske and Tim Cindric’s presence pushed them to go harder with the calls – but with no stops at this event, qualifying will be the key.

“I’m confident we can roll out, qualify well and have some strong race pace.

“What we want more than anything is a return of that consistency and bank some race results we think are reflective of where we are at the moment.”

Story expressed his thanks to those who helped turn Coulthard’s car around at the Gold Coast, acknowledging those outside the team who made it possible to take the start on Sunday.

“There’s still a little bit we need to do to get things to where we want them to be, mostly to tidy it up,” he said of the #12.

“But the work done that evening was a testament to the commitment and dedication from the guys who work for DJR Team Penske, and also the great efforts the guys from PACE Innovations went to, to commit time on their weekend and do the overnight shift. It was impressive to see.

“I’m extremely grateful to everyone involved, right down to the officials at the track who helped in allowing us to use the tow truck the car was on to get it to PACE Innovations, they made it easy for us to get an early start on the car.

“It was a result of a lot of people working very hard and sacrificing a goodnight’s sleep, and the result was one that reflected their efforts.”

Coulthard and Luke Youlden were able to finish 15th on Sunday.