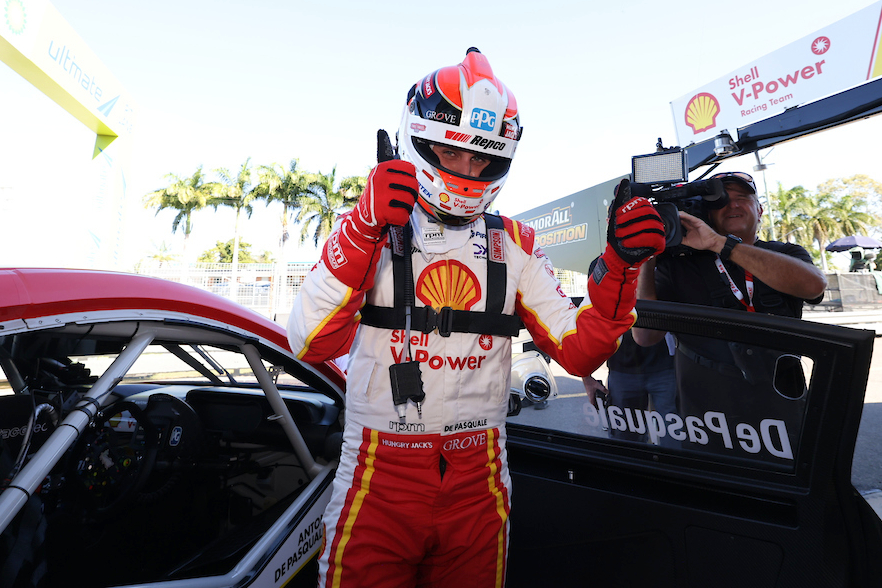 An early run-in with the Reid Park concrete had Anton De Pasquale fearing he'd ruined his chance of pole in Townsville.

De Pasquale was peerless in the Top Ten Shootout en route to a fourth ARMOR ALL Pole Position of 2021.

The 25-year-old pieced together laps good enough to top the second part of qualifying and the subsequent one-lap dash.

It came a week after the Shell V-Power Racing Team driver scored podiums in both NTI Townsville 500 races, albeit some margin behind the runaway Red Bull Ampol Racing duo.

"It's quite cool to come back to the same race track, it's kinda like a two-day test. You get to think about it and debrief all week," he said.

"The car's completely different to what it was last week. The car being at the front is really cool.

"I thought I threw it away a little earlier, because I hit the fence at the start of qualy, a little bit bent in the front.

"It didn't make a difference, so all good."

Both De Pasquale and teammate Will Davison fired early shots in Q2 and sat out the remainder of the segment, such was the team's confidence in their drivers' times.

Cameron Waters loomed as their biggest threat, and Davison was unable to displace the Monster Energy Racing Mustang.

Having missed out from pole in the Tailem Bend finale and Darwin opener, De Pasquale was itching to convert to victory come Saturday afternoon.

"We've got a long arvo... I've never been a big celebrator," said De Pasquale, whose last win came at The Bend in Race 10.

"We'll try and convert this arvo and then we'll cheer a bit more.

"It's really cool, it's tight. They're going to make us work for it this arvo, so I'm looking forward to it."

De Pasquale will launch from pole alongside Waters for the 39-lap Race 17 at 4:45pm AEST.