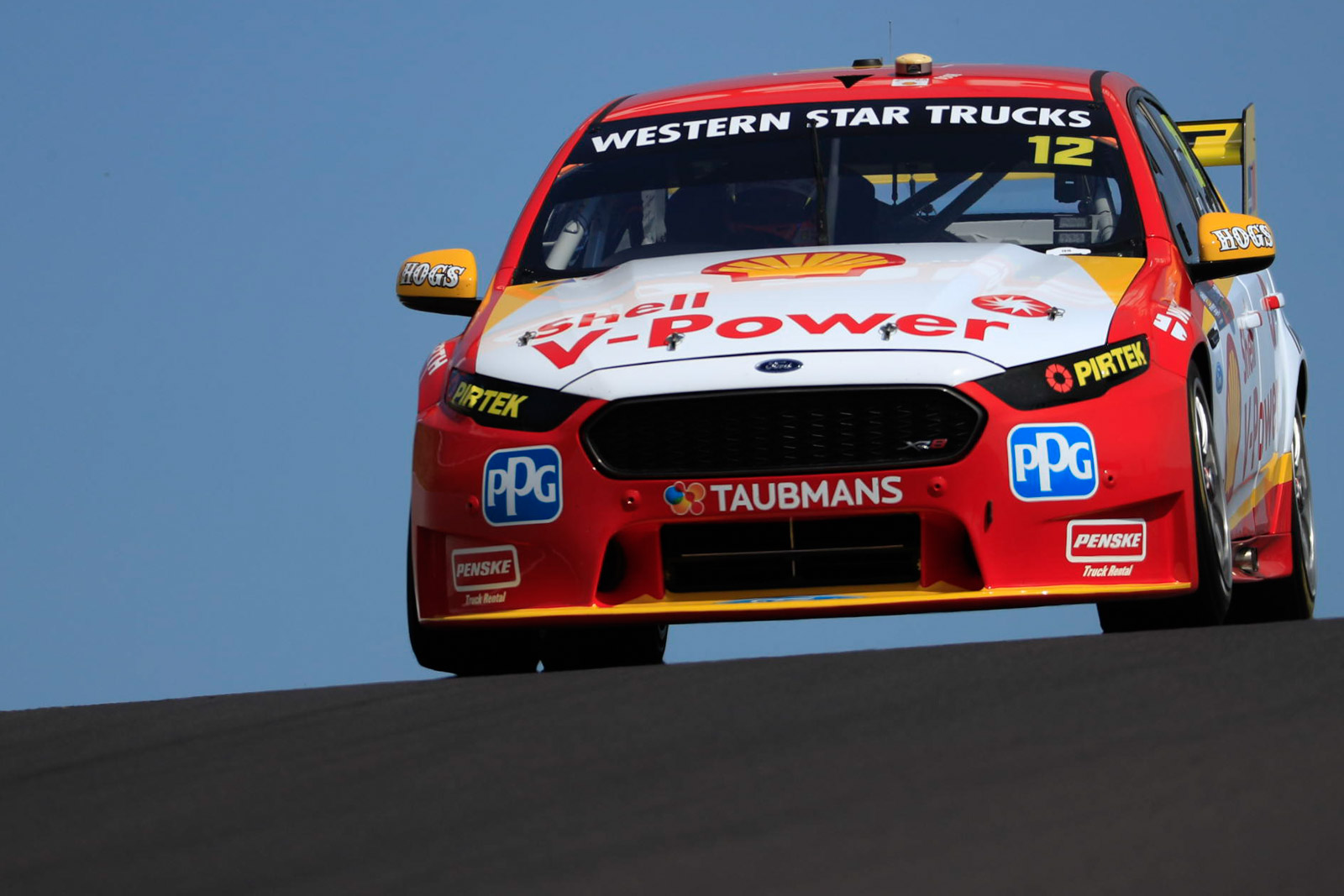 With team owner Roger Penske on his way down under Fabian Coulthard has declared DJR Team Penske a legitimate contender for victory in the Supercheap Auto Bathurst 1000.

Coulthard finished second fastest on Thursday in his Shell Helix Ford Falcon FG X, just 0.0734sec behind Red Bull’s Jamie Whincup after both of them had a lash on new Dunlop hard tyres in the dying minutes of the third and final one-hour practice session.

The opening day of action left the 34-year old New Zealander convinced the team can turn one-lap speed into a race-winning proposition, despite issues this year with both strategy and pit stop execution.

“We have to do everything correctly, but I think we are quick enough and we have the reliability and the strategy and everything like that.

“We have to be realistic because there are some quick guys out there so we just need to do everything from our part correctly and see how we stack up.”

While DJR is the oldest team racing in Supercars and has scored many wins, the new entity has not won since Penske took majority control for the 2015 season.

DJRTP’s issues have been sheeted home to the team’s dramatic expansion and overhaul for 2016.

The move from one to two cars meant an influx of extra personnel as well as turnover of existing staff. Engineers Phil Keed and Adam De Borre are new recruits this year.

The team started the season strongly, slumped mid-season and has now started to bounce back, with Coulthard and co-driver Luke Youlden claiming sixth place in the Wilson Security Sandown 500.

“The team is constantly evolving. You can see that in our results. In the last few races we have been consistently in the top 10.

“You don’t get top 10 results without everyone working together.

“The boys are all conscious of it and they are crossing the T’s and dotting the I’s so we can have a good successful Bathurst.”

Coulthard acknowledged the issues DJR Team Penske had suffered this year, but was philosophical about the potential impact they might have on his and co-driver Luke Youlden’s race.

“I have to focus on my part and do my part right and what happens in pitlane is out of my control,” he said.

“But obviously we are working hard with everything, we have a lot of new guys within the team this year so it's growing pains unfortunately.

“You are always going to have issues at some point, but the boys are working hard and the longer they work together the better it is going to be.”

Coulthard took further heart for Sunday from DJRTP’s strong 2015 performance at Bathurst. Scott Pye contested the ARMOR ALL Top 10 shootout and the Xbox Falcon was headed for solid top 10 finish until a steering failure pitched him into the wall at the top of the mountain.

“We are feeling pretty happy at this point,” said Coulthard. “There is obviously a long part of the weekend to go but the way it’s rolled out in practice one, Luke’s performance [eighth in the co-driver session] and then to end the day P2 means it’s been not a bad day.

“I am still trying to fine-tune our car and make it a little nicer, but you look at Scott’s performance here last year and the car was very fast also.

“So we have a good base to work from, but we just need to keep fine-tuning it and make it better.”

Whatever happens on Sunday, Coulthard’s form in recent years with his previous team Brad Jones Racing indicates he will be right up there in qualifying today and Saturday.

He was Friday fastman in both 2014 and 2015 in the Freightliner Commodore, but was unable to turn that into ARMOR ALL Pole Position in either year.

Coulthard said Roger Penske’s first visit to Bathurst, alongside Penske Racing president Tim Cindric, would not affect his race. But he welcomed their presence.

“I love having Roger and Tim here, they get to see first-hand what’s happening and how the team is evolving.

“A lot of the time it's via email, phone call or text with just a bit of an update, but sometimes those things can get lost in translation.

“To see it first-hand, how we are getting better is important.”