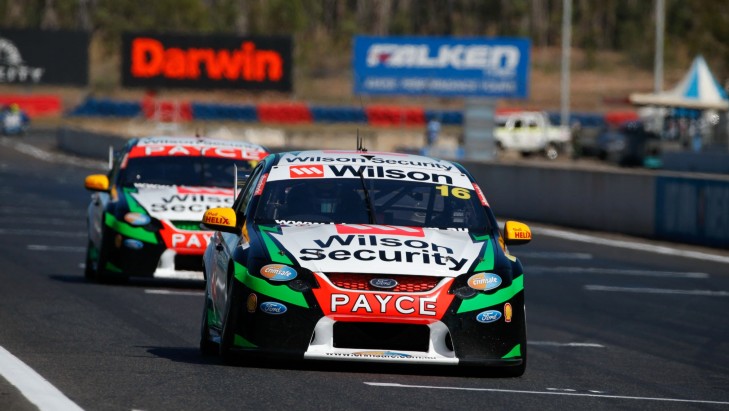 The mighty Dick Johnson has been in far bigger scrapes than this. The great of Australian motorsport has described the departure of Sporting Director Campbell Little as a minor bump on the road to returning the famous DJR brand to the top.

Patriarch Johnson has stated many times publicly that the celebrated DJR brand is here for decades. He reiterated the same intention this morning, saying that the existing engineering group will power ahead towards the team's first independent test day of the year at Queensland Raceway next Wednesday.

"We are trucking on as we have in the past," said Johnson, whose DJR team remains the longest running and most successful in the history of Australian Touring Cars.

"Like every business the level of operation depends on the finances available," he told v8supercars.com.au.

"We are always looking at ways of trying to save money yet operate at the highest level. This is a case of making sure from this point on we don't get ourselves into any strife like we have in the past."

Johnson has full faith in DJR senior manager Ryan Story and his team to run the show, with Story and the team's individual engineers to continue liaising with FPR who supply the twin cars of Scott Pye and David Wall as well as engineering support, which is how Little went from leading the Ford factory team to DJR in the first instance.

Johnson could not confirm whether the sporting director role would be replaced but that the team's highest priority, which interestingly is also that of FPR's,is to qualify higher up the grid to give Pye and Wall the chance to race at the front of the field.

The test at Queensland Raceway will be the team's first independent run of the year, ahead of next event the Coates Hire Ipswich 400, at the circuit from August 1-3.

"And as far as I'm concerned, because of our links with FPR this (qualifying) is where it's all at," Johnson said of the six FPR prepared cars and qualifying this season.

The upcoming event at Queensland Raceway marks one year since the Wilson Security-backed DJR's last race win, with Chaz Mostert notching up his first in V8 Supercars at the event last year.

The team recruited up-and-coming drivers Pye and Wall for this season, and Johnson is encouraged by their progress so far, with the two sitting 15th and 21st respectively in the Championship.

He believes one of DJR's strengths is helping young drivers come of age.

"We've always had good grounding with young people and obviously Scott's been doing pretty well and David, to be quite honest, has blown away most people's expectations of him with some of the results he's been getting."

Last year's win - the team's first since James Courtney's successful 2010 Championship campaign - was a boost for the small team, and is remembered fondly 12 months on.

"It turned a lot of things around," Johnson said.

"Certainly no one had the expectations we could actually be on the podium, but win races.

"For me I think it was certainly good for the team and the boys in the team, because they've had a pretty hard trot the last couple of years. But that's all behind us now."