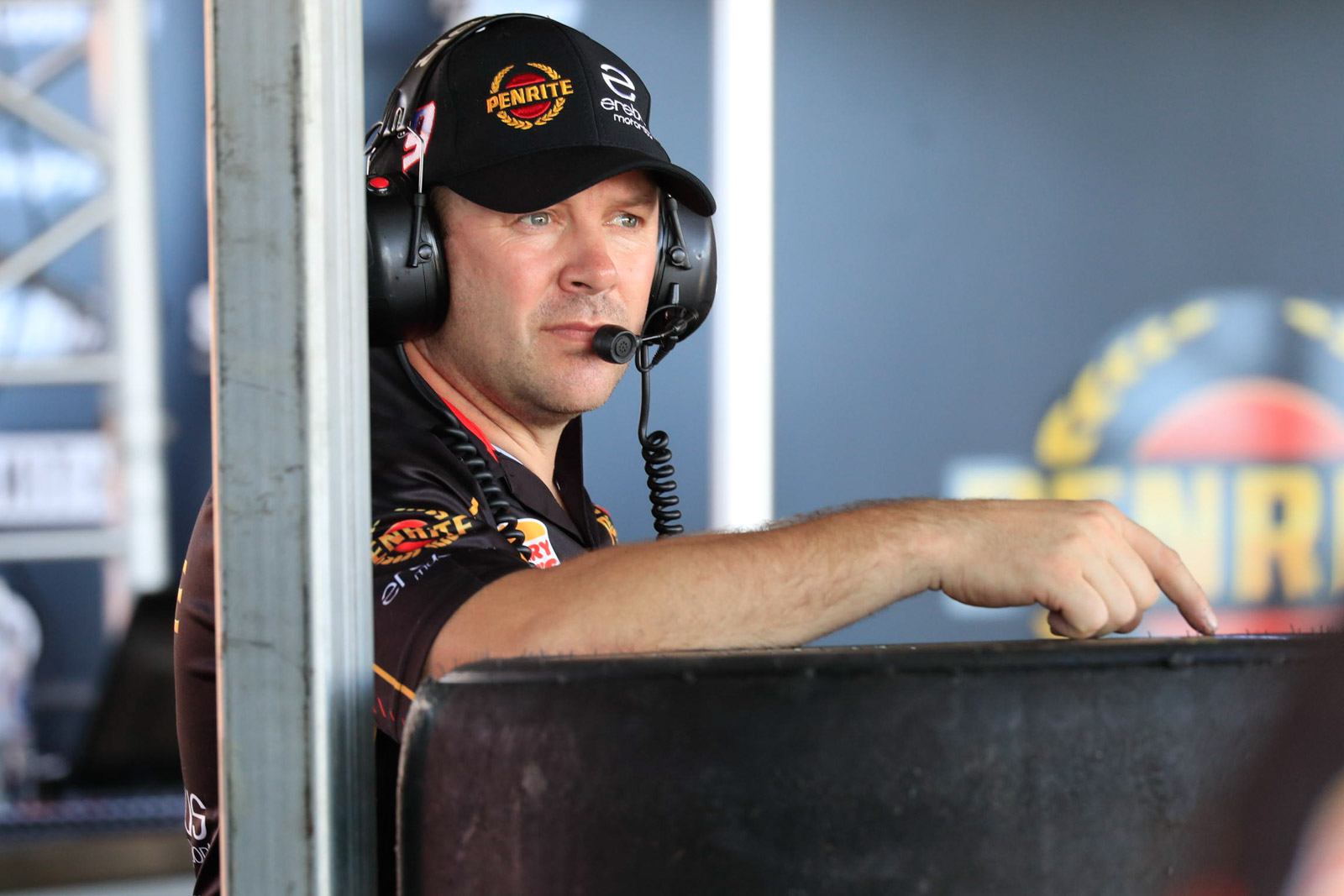 Completely transforming over the off-season, Erebus Motorsport came out with different cars, drivers and personnel housed in new state Victoria for 2016.

While owner Betty Klimenko is still at the helm, team boss Barry Ryan plays a huge part in the day-to-day running as well as engineering star driver David Reynolds.

Reynolds and Ryan have worked to remake the ex-Walkinshaw Racing Commodore purchased into their own beast, replacing last year’s Erebus Mercedes-Benz AMG E63s. Reynolds’ driving talent has shone in the occasions he has pushed to the front.

The second car has been a messier situation, with Aaren Russell shifting up from the Dunlop Series with sponsor Plus Fitness for the start of the season, but stepping back after Townsville after a falling out. It has left a hole for a driver as the Red Rooster Sydney Motorsport Park SuperSprint approaches.

Putting Reynolds’ co-driver Craig Baird in the car solved the issue at Queensland Raceway – and had the added bonus of getting 46-year old Baird some miles under his belt – but Ryan says the focus is on finding a long-term solution.

He spoke to supercars.com about Erebus’s year so far and future plans.

Standout moment of the season: Reynolds’ gutsy drive through the field from 17th to sixth at Winton was a reminder of the 2015 Bathurst pole sitter’s talent. An appearance in the ARMOR ALL Top 10 Shootout in Townsville landed him fifth, but electing not to change tyres at the end of the race meant he dropped back to 14th.

BR: I think, out of 10, I’d give car 9 an eight, based on what we’ve done in the last few races – Townsville is the one that stands out. To get to that level in the period of time we’ve had is probably way above the expectation. It’s just maintaining that level that’s the hard thing. You see with experienced teams, bouncing from track to track is not easy, and it’s harder for us because we’ve got no data or baseline. We proved in Queensland you can go from the front of the grid to the rear of the grid pretty quick when you don’t get it right. That was just purely based on not having any history at Queensland – we had to start from scratch.

Is the data you have from the Benzes not helpful on any level?

No, it’s just a totally different car. Between the aero, the position of the engine and all that sort of stuff, it’s a different car, so we really haven’t related much to it at all. We’ve looked at a little bit of driving data when the car was good, but it’s not really [helpful].

Dave knows where to brake and knows where he should be able to put the throttle on, he doesn’t need to be taught that, so there’s no driver training anymore it’s just getting the car right.

Is Dave happier in the car now you’ve been able to put your own spin on it and make it more of an Erebus Commodore?

Yeah, 100 per cent. From the start of the year, the first couple of rounds he just didn’t like the feel of the car. He had his own vision from the first time he drove it of what he needed to get out of the car and I think we’ve achieved that a few times this year. It shows straight away – as soon as we can get what he wants, he’s on the pace.

Rate Dave’s performance on and off track this year.

Where are things at with the second car and driver at the moment?

We’ve been left in a very difficult position … we’re just trying to find a solution to get through the year with the most credibility we can. We’re trying to get results, targeting next year and making sure financially we can be stable. At the end of the day, we need to make sure we can pay the bills – that’s a big part of it.

And we’ve got a lot to plan – we’re not going to just do something that fixes it for one round, we need to look at the long term and how we’re going to get car 4 to be up there with car 9.

Transforming in such a big way, juggling the off-track has been a big consideration. Where are you at with things like building your own car?

We’ve got a lot of hardware – some of it carries over from the old cars. We’ve got a chassis there that doesn’t know whether it’s a Mercedes or a Commodore. We could quickly build a spare car or a new car. We’ve got Jimmy’s Fab Shop’s James who works with us – he’s built multiple cars for teams in the category – he’s itching to build us a new car.

We’ve pushed the button on a few things, we just need to find the time to finalise exactly how we’re going to build it and what the layout is going to be even, and move forward in the right direction.

At the moment we’re not consistently getting the most out of the car we’ve got.

Is building your own car important, given you don’t own the second chassis you’re racing?

We’d love to run our own as quickly as we can because it’s a lot tidier for the business. Hopefully we can rectify that situation before Sydney Motorsport Park and have some security around where we are heading.

Would you be more inclined to finish your own car than get another Walkinshaw car?

Definitely, that would be our preferred option, but you never know how it ends up playing out. If we have a massive crash at the next round, we might have to speak to Walkinshaw about borrowing a car off them, or leasing a car – that’s always been in the back of our mind, without the other situation.

Where are the Mercedes Benzes at the moment and do you have any plans for them?

How are you going personally running the team and engineering Dave this year?

Honestly, it’s not the easiest time of my life. It’s a massive challenge but I never back away from a challenge. It’s just something that, I was part of the whole decision of what we would do to support Betty and her team and I’m not going to back away until we have accomplished what we want to do. Hopefully it’s not 10 years of this sort of thing, hopefully it’s a short term thing and we structure everything better and just keep moving forward.

Do you have plans to test soon?

We’re definitely testing at least once before Sandown, possibly once before Sydney Motorsport Park, depending on our decision with car 4 and the driver.

We’ve got so much stuff to test, the last test day was rained out. We’ve got a pile of stuff we want to put on the car without risking ruining a race meeting. There’s things we’ve put on at a race meeting and taken back off because we weren’t sure, but at a test day we would’ve had time to tune around it and try to make it better. So there’s definitely plenty of armour in our toolbox to hopefully go faster, we just need the time.

A race meeting is such a risk to try something different because once you end up behind, it’s hard to catch up. We already started behind, so we play Russian Roulette a bit with what we do. We’ll go with Dave – if he’s fairly confident the car is close, we’ll start trying stuff that’s outside the square and hopefully we don’t get too far behind. But if we start off with a car that’s not that good, like what happened at Queensland, it’s really hard to try something we want to develop and still keep the momentum of the race meeting going without ending up behind. That’s probably what we did there and it took us until Sunday to catch up.

If a driver for the second car is a possibility for the test, are you close to making a decision?

Yeah, we’re close. Like I said before, it’s a real balance. We’ve got a loyal bunch of sponsors and we need to show them we’ve got a vision and we’re not just thinking of a short-term solution. There’s a really small market now of strong, experienced drivers that can deliver results straight out the gate.

We’ve got one or two solutions left on the board that we’re working with our group of sponsors on and we have to make sure everyone sees the vision of how it’s going to work for the rest of the year and hopefully, the future. It’s a balancing act, we have to manage it properly and make sure everyone sees why we’re doing it, and it’s not just seen as doing it for the wrong reasons.

How’s the workshop move going [from Moorabin to Dandenong]?

Good. We’ve got an experienced guy helping us project manage it, making sure the walls and floor get painted, the layout is how we want it, so that’s going good. We hope to be in there by the end of this month permanently, so we’ve still got three and a half weeks. It’s on track – we could go there if we had to, if this building burnt down tomorrow we could move there if we had to, really. It’s at a point where it’s close to moving in.

Are you going to ask about enduros?

How do you feel about enduros?

We definitely think we can run a minimum top 10 in the enduro series. Targeting the top five and podium at Bathurst is our aim at the moment. A realistic aim.

Bairdo has had the advantage of running at Queensland. When he says he spent the first half of the session working out the pit lane speed limiter, it reminds you how much they do have to re-learn in the Supercars.

Yeah – it was good and will definitely help him. He and David get on like a house on fire, so it makes a big difference.