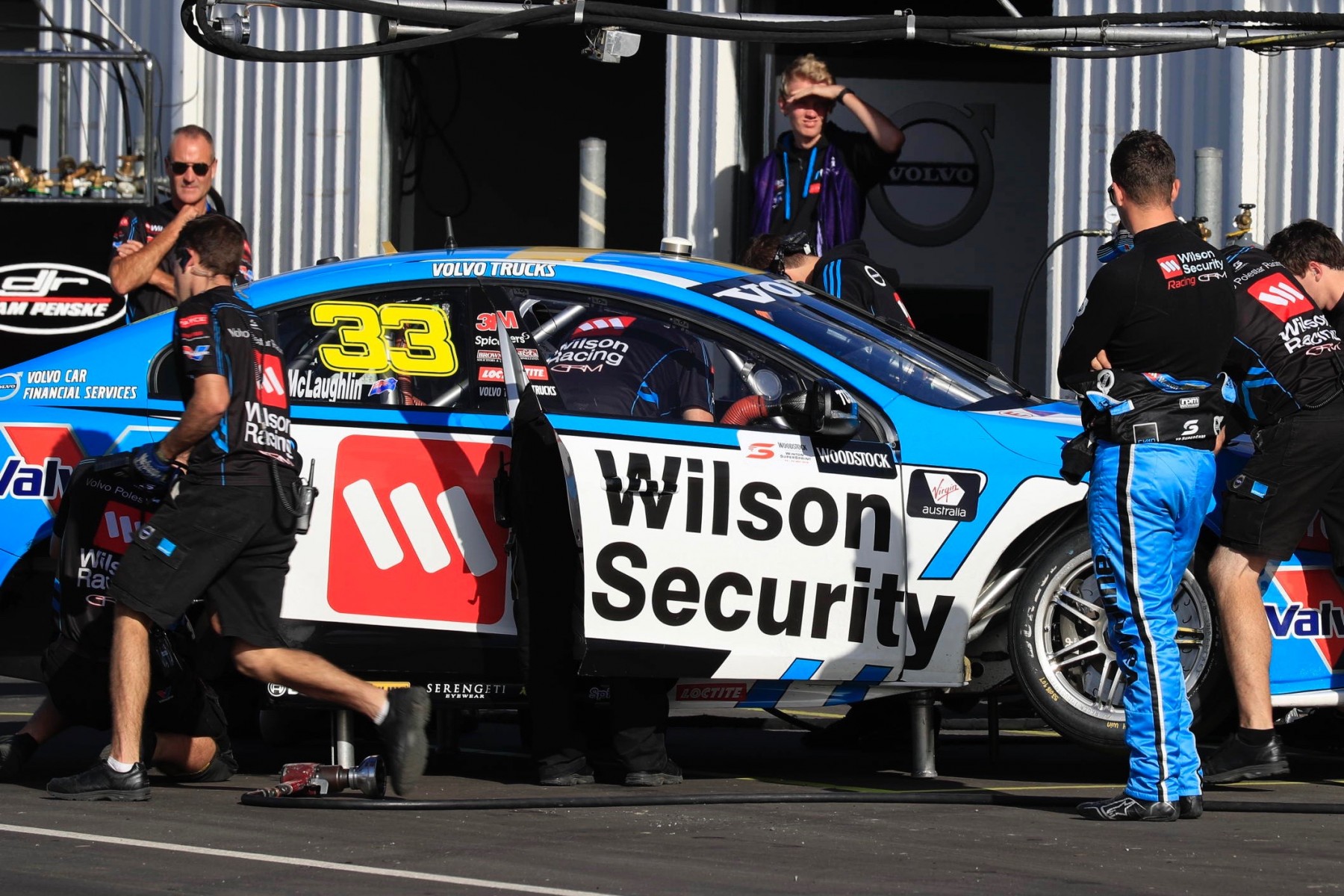 What a year for Garry Rogers and his hardy band of Dandenong warriors!

After the Phillip Island championship event they stood supreme with their lead driver Scott McLaughlin sweeping all before them.

Within days Volvo had pulled the plug on the program and within weeks McLaughlin had announced his move to DJR Team Penske from 2017.

In recent events McLaughlin and the team’s form has slipped away slightly, while new team-mate James Moffat has still to consistently find the speed expected of him.

With Garry Rogers taking the opportunity presented by the mid-season break to drive the tractor and harrow some fields, son and team 2ic Barry Rogers sat down with supercars.com to talk about a turbulent and memorable few months.

Standout moment this season: Scott McLaughlin utterly dominated the WD-40 Phillip Island SuperSprint, claiming both ARMOR ALL pole positions and races in the Volvo S60. His Sunday drive to second at Barbagallo was just as worthy, considering it came just days after the shock news of Volvo’s withdrawal.

VASC: Assess the year so far.

BR: In terms of a performance level it has gone well without being brilliant. Obviously, after having the reliability issues early on last year we were nervous starting that first race, considering how Clipsal started last year. But obviously the form there was good. As it did for a lot of people, the rain ruined what could have been a lot better race for Scott McLaughlin.

From there on I’d say it’s been good.

You made a concerted attempt in the off-season to improve the performance of the entire team and not just focus on the cars. What’s your assessment of that?

In the off-season we went over the pit boom video and things like that. We have been looking for that little bit here and there that may just assist us because we are positioned so far back down pit lane. We found our tyre changes have been pretty good, but the pressure has not been on the tyre people in past seasons because of the fuel going into the cars on the Sunday and no tyres during those two 60km races last year.

So there was a bit more effort put into tyre stops in the off-season because we knew the Saturday 120km races were going to be tyre dependant and we had probably become a little slack with or tyre changing.

With the fuel guy we also noticed there was a half a second there just getting the fuel filler into the side of the car because the car wasn’t stopping on exactly the same spot every time, so we worked on that with the drivers.

So there’s all those little things, like shepherds and tackles in footy, you might not get a stat every time but it all helps and there is no doubt our pit crew has been very strong this year. The improvements are only minimal in time but when you can pick up three or four tenths in a pit stop when the cars are only separated by hundredths on the track then it’s certainly worthwhile.

That sort of attention to detail is indicative of the evolution of GRM. Are you a team now capable of winning the championship?

Obviously the driver is traditionally the full forward of the team. He is the one who gets all the pats on the back and kicks all the goals. And there is no doubt with Scott over the last few seasons we have had a fellow with the potential to win a championship. But he can’t do it by himself, it has to be a whole team thing from Garry down.

So if you asked is the team capable of winning the championship with the right guy behind the wheel, I believe we are.

I think we are right down the track in regards to being a team that’s up there with the personnel that’s got the ability to win. We go to every race meeting believing we can win.

So how has the team and its members withstood the double shock of Volvo’s pull-out and Scott’s decision to move to DJR Team Penske?

There is no doubt they have both had big impacts, moreso the Volvo decision. And that is no disrespect to Scott, he is a great driver and a great fellow to have around. But the Volvo announcement was a real shock.

To be honest I really felt for Dad through all that considering what he has put into motorsport over a lot of years and more recently helping Volvo revive their brand.

They were well aware telling us in May – after giving us the belief that they, being Volvo and Polestar in Sweden, supported an extension and it was really in the court of Volvo in Australia to put the numbers against it and make sure it stacked up – that they didn’t want us to race the cars in 2017 gave us only seven months to go and find another manufacturer and sponsorship. And they knew it took 19 or 20 months to do what we did with them, so how they expect us to do that in seven months I don’t know.

So that has shocked us more than Scott’s decision for sure.

Until Volvo made that announcement we felt we were the front-runners to retain his services for sure and the key indicators were that he was going to stay.

Scott has always been up-front, 100 per cent honest with us. He is the best young bloke in regards to that, telling us what is on his mind good or bad.

When that decision came out he got nervous and we don’t blame him for that. As much as he has got a lot of faith in Garry to pull something together, we hadn’t got it together and Penske made him the offer and he did what he did.

But has all this impacted on the crew?

The morale around here is as good as ever, we are not walking around here feeling sorry for ourselves. Cowboy (team manager Dean Cowling) runs the show and Krusty (chief engineer Richard Hollway) and Gypsy (engine guru Jeff Marshall) and those sort of guys have been around and are the spiritual-type leaders within the group and they are as strong as ever and they are committed to the team.

They understand the direction change and they see this as a real challenge whatever we are going to do.

The attitude is not backs against the wall, but we feel that we have something to prove and we really want to make this happen and get a result. So I think we are as good as ever.

I know we have had a couple of average results since Scotty has announced he is leaving but I don’t think they are linked. I think you will find on the Saturdays at the last three events we have struggled and then come good on the Sundays. Obviously there’s been a transition from hard to tyres to soft tyres this year and we have sometimes didn’t get it quite right and taken till Sunday to work it out.

So through all that how has Scotty actually performed his job as a racing driver?

He has performed very well. Over the last two or three rounds we as a team have been marginally off but obviously it only takes a little dip in pace to end up back in the pack in their championship. Perhaps all the issues around his contract and future have impacted on him a little at times; he did say letting the boys know here what was going on was a big relief.

Certainly there’s no hard feelings towards him from within the team because he is going and a big part of that is because of the way he has been the whole time he has been here. He has been up-front, honest and like any good employee a company has, when they decide to move on and you see their reasons for doing it, there is no hard feelings. We wish him the best and we are 110 per cent behind him all the way.

And your new recruit James Moffat?

So he has been up there but just not consistently.

We probably take it a bit for granted at times that the cars are basically the same in the Car of the Future era, but he has found the dynamics of our car quite a bit different to what he is used to. In real laymans terms he has probably found the rear of the car a bit looser than what he would like and he has had to adjust his driving style a bit to get a hold of the car.

Not jumping out of the blocks at the start of the season hurt his confidence and he has been a bit behind the eight-ball since then, but we can see when we look at his micro-sectors that he’s got it.

It’s a case of putting all together and we’ve still got the balance of the season to achieve that.