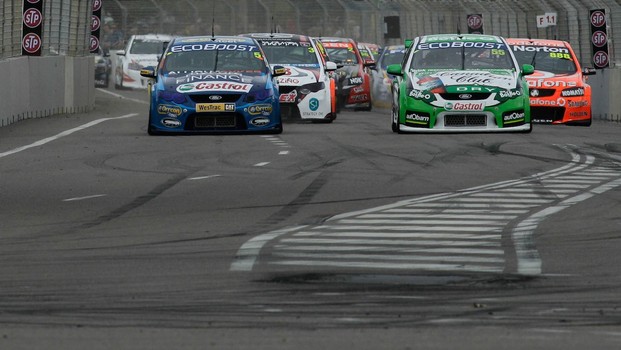 The V8Supercars action in Townsville will unfold on roads some locals take to workevery day – but what goes into building a street circuit?

A week outfrom the Sucrogen Townsville 400 and the finishing touches are being added– grandstands are being finalised, as well as bridges, and the lastbarriers are being put in place.

The term‘hybrid’ is used because part of the Reid Park area is a permanent circuit– roughly two thirds of it, in fact. The rest is a street circuit.

The pitlane complex is a permanent fixture. When the V8 Supercars aren’t pulling intoit, it is used throughout the year for functions, conferences, meetings and bylocal education outfits, amongst others.

Some of thebarriers are placed permanently in the Reid Park section – but becausemost barriers are on the public roads, the majority are taken down andre-erected each year.

“Essentiallyin Townsville we start with a blank canvas aside from the pit building itselfand parts of the trackside kerbing and barriers,” V8 Supercars General Manager –Promoted Events Kurt Sakzewski said.

It takessix weeks to build the circuit and it is generally complete the Thursday priorto the event (in this case, July 4). It then takes three weeks to take down. Closingthe arterial road of Boundary Street is last on the to-do list, and it is reopenedthe day after the event.

Sakzewski describes the circuit as asmaller version of Albert Park, where the Formula One Australian Grand Prix isheld in Melbourne.

“It’ssimilar in look and feel and it’s on a parklands area, there’s the onepermanent pit facility building and the eyeline is quite good,” he said.

While thepit facility used for the F1 cars is permanent at Albert Park, the V8 Supercars pitfacility is dismantled every year – and the same happens at Olympic Park (Sydney),Adelaide and the Gold Coast.

“Being a hybrid, Reid Park is almostthe reverse build of the New Zealand track,” Sakzewski explained. “That’s apermanent circuit, but has street elements to it.”

Whilestreet circuits produce tight racing and offer great accessibility for fans,there are downsides to running a race on everyday roads.

Maintainingtraffic flow during construction is one challenge. And with a high schoolacross the road, and a Civic Theatre in the centre, it is important there isaccess as long as possible. Fortunately the event falls around school holidays.

While thefirst event at the Reid Park circuit saw some minor issues with the circuitduring the race – screws coming loose and kerbs breaking off – theywere quickly addressed.

“The natureof street circuits is issues arise from time to time,” Sakzewski said.

“One of the great characteristics ofthe Adelaide street circuit for instance is the bumps on the main roads– every street circuit has something different about it, but that adds tothe circuit’s personality.”

While theGold Coast street circuit runs through high-rise buildings, with high catchfencing, the Reid Park circuit is very open in nature with many viewing areasand access for spectators.

The eventoffers many attractions for attendees this year, including the new JimBeam Party Platform at turns seven and eight, offering prime elevated viewing.

There’splenty for families with the children’s Fun Zone and great displays – if youcan tear yourself away from the racing. From V8 Supercars to Dunlop Series, PorscheCarrera Cup and the V8 Utes, the circuit will host plenty of action. And to topit off, Australian legends IAN MOSS and HOODOO GURUS will be rocking out on theSaturday night.

Tickets areavailable through Ticketek, and for those who can’t make it on the day, V8SuperView is a great way to see the racing live and uninterrupted. At theSucrogen Townsville 400 it is exclusively showing Friday’s last practicesession as well as Saturday’s first practice session.

26/06/2013
Related Content
Sucrogen Townsville 400: Family Fun and Fast Cars  ›
26/06/2013
2013 Sucrogen Townsville 400  ›
Stay In The Know
Sign up to the Virgin Australia Supercars Championship Newsletter
We use cookies to ensure that we give you the best experience on our website. If you continue to use this site we will assume that you are happy with it.Ok