Brodie rides in “his” car 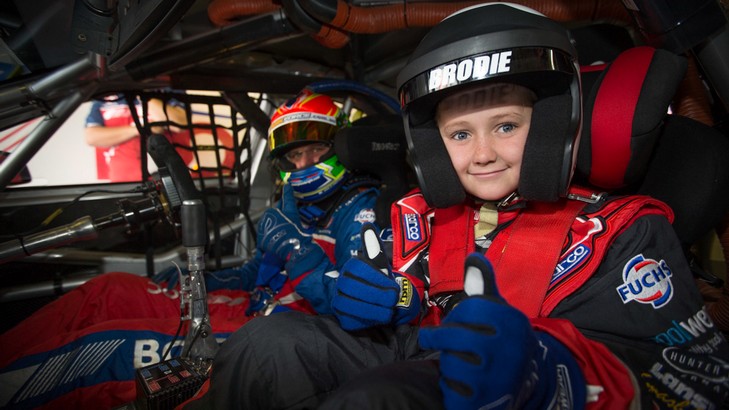 Brad Jones Racing’s special fan Brodie Pearson jumped in the car alongside his idol for a lap of Winton Raceway this afternoon.

The Wangaratta boy sent BJR $10.20 of his pocket money to help build Jason Bright’s Team BOC Commodore after a spectacular rollover at the Clipsal 500.

The team treated nine-year old Brodie to some time in the workshop and spare panels to take home after receiving his donation, and today he received the ultimate – a ride in a real V8 Supercar.

Strapped in a booster seat, his name emblazoned across his helmet and a mini-driver suit to wear, Brodie jumped in the car a little nervous.

“My heart was beating faster,” he said of his feelings before the ride.

But he was in good hands, with four-time Winton winner Bright going easy behind the wheel, and a medical and technical team supervising the ride.

“Yes,” he said when asked if it was loud inside, and fast. “He slowed down a bit more” in the corners though.

Of course, he loved the experience, though seemed a bit shy.  “I think he’s a bit shocked!” mum Jaya Pearson said. 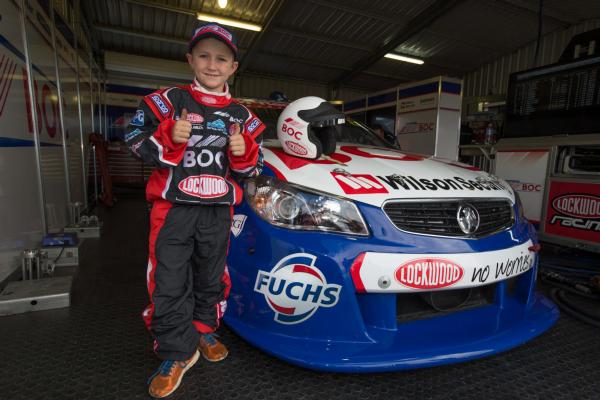 “We’ve been following it forever,” she said of the V8 Supercars. “He was out here when he was born, three or four months old, and has watched it ever since.”

“He needs to get more wins!” was Brodie’s answer.

Jaya said he liked the BOC on the car ands calls it his “bok” (as opposed to B.O.C.) team.

The family spent the day with the team, watching practice in the garage and getting an understanding of how the team operates on Friday, ahead of tomorrow’s two races, which they will watch live at Winton Raceway.

Bright finished today’s practice session in sixth, while teammate Fabian Coulthard topped the times, smashing the lap record in the process with a 1min20.79.